Car from Guwahati to Kaziranga (back to Guwahati ) = 5 hours journey each way ( Rs 11,000/- for Innova). But there is no carrier in the car. So make sure there is a carrier, otherwise 7 people cannot travel by same car. The car stayed in Kaziranga throughout the tour with us. Gobindo took another car for them.

We stayed in Aranya lodge of Assam Tourism Deptt. The rooms are really good. We paid Rs 1450/-. Gobindo stayed at Camp rhino which is 25 Km from our resort. But location of Camp rhino is better  - it is far from the madding crowd. 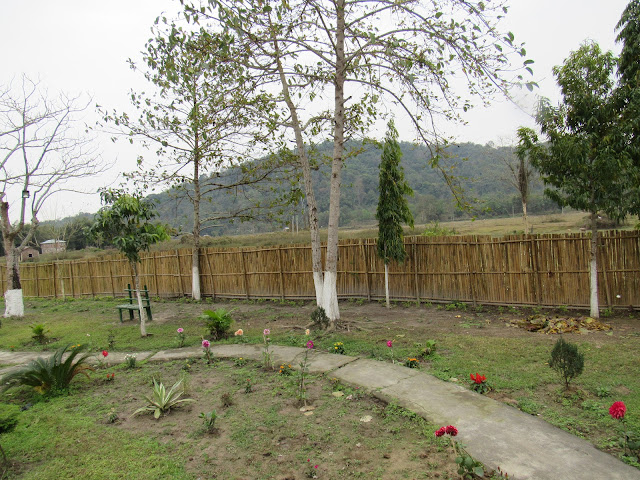 We did the evening safari at Central zone.

The diversity of Kaziranga is unparalleled in India. The forest is mainly Grassland and has similarity to the savannah of Africa in some parts.  Grasslands have many names—prairies in North America, Asian steppes, savannahs and veldts in Africa, Australian rangelands, and pampas, llanos and cerrados in South America. But they are all places where there is too little rain for trees to grow in great numbers, but not so little to form a desert . They are however scattered with trees mostly Acacia and Bobab.

Based on climatic dryness there are 2 types of Savannahs - Tropical grassland (also know as Savannah are located near equatory) and Temperate Grassland. African tropical grassland or Savannah has more variety compared to South American Savannah like Pantanal. One fourth of the earth's land is grassland. According to WWF there is third type called Flooded grassland.

Morning Safari at West Zone. The morning safari starts at 7 am. But because of rain, we started late at 9 pm. Our safari jeep got stuck once, because of the mud. 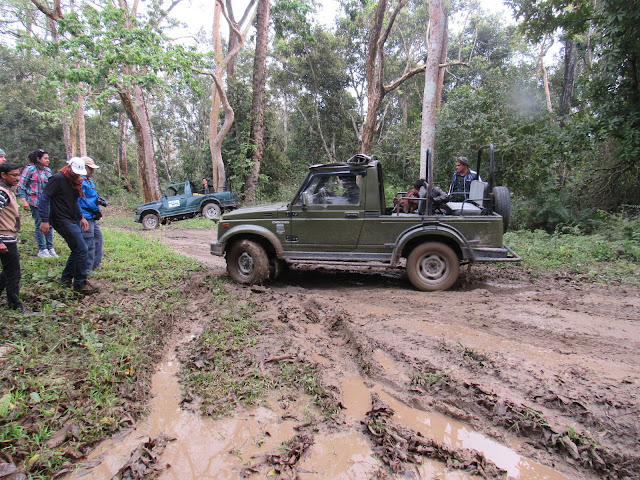 The elephant safari starts at 5 am and 6 am. The ride is Rs 950 per person and the charges for taking the car to elephant ride zone is Rs 500 for the whole car. We did not take it.

We came back at around 12 pm

Evening safari starts at 2.30 pm. We went to the East zone. 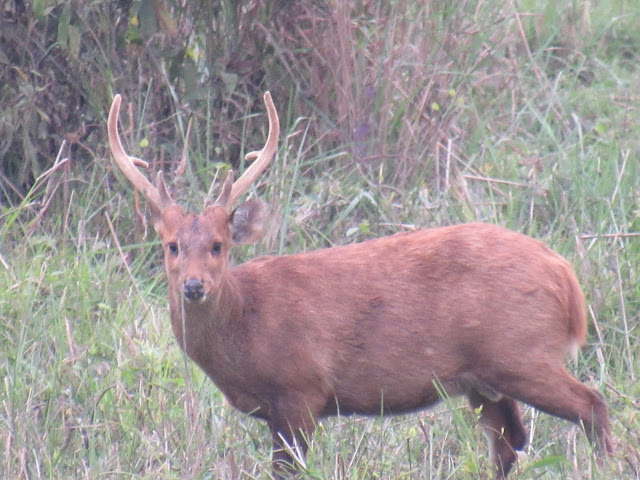 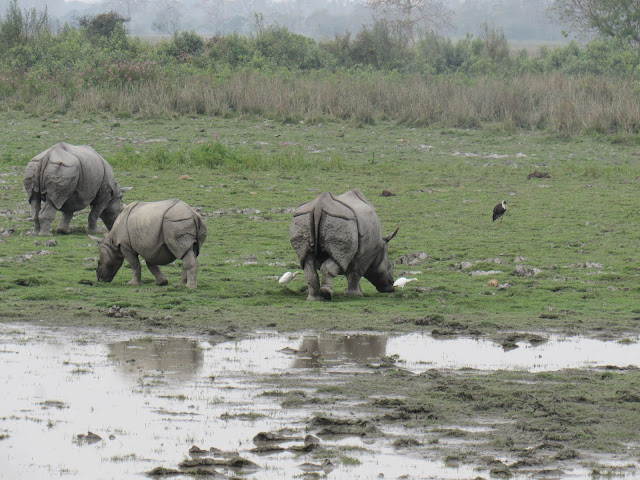 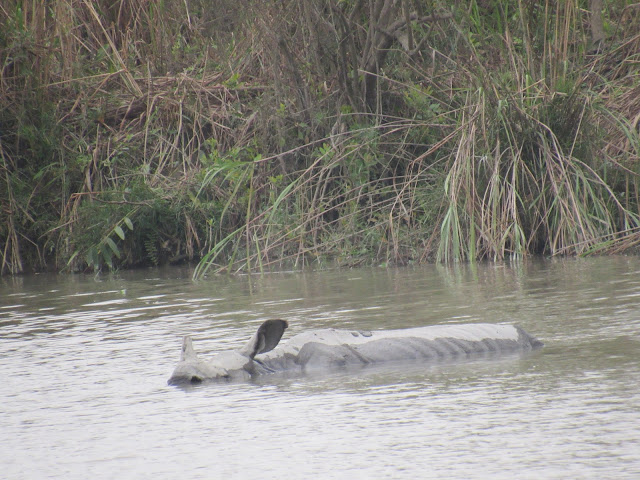 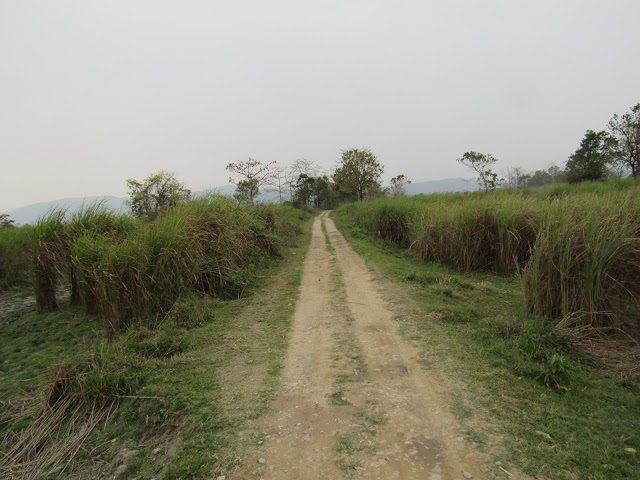 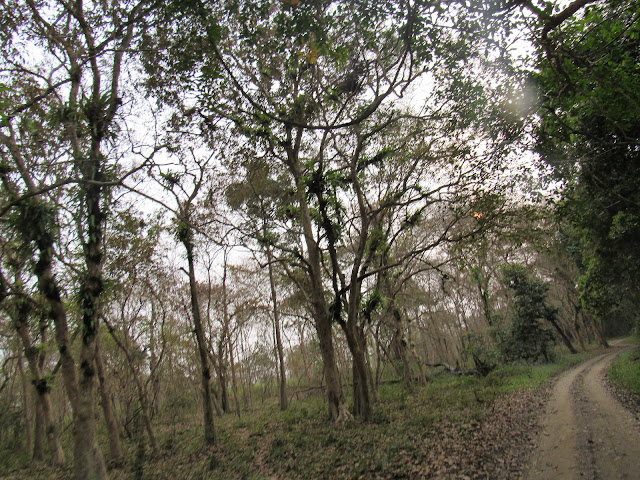 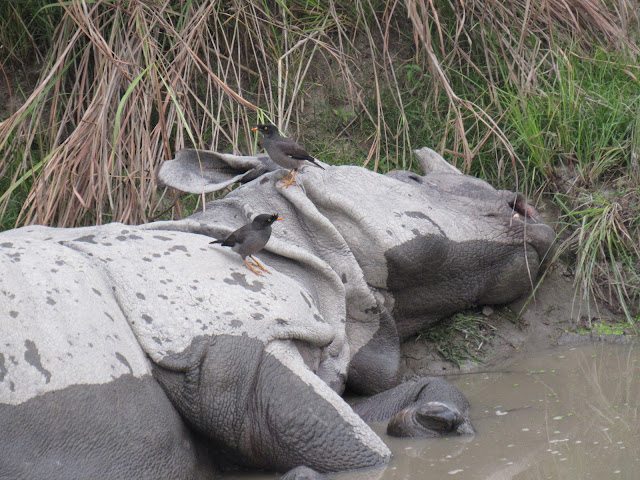 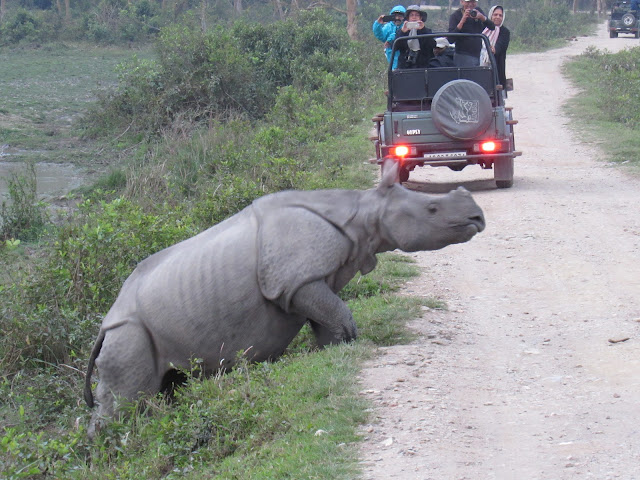 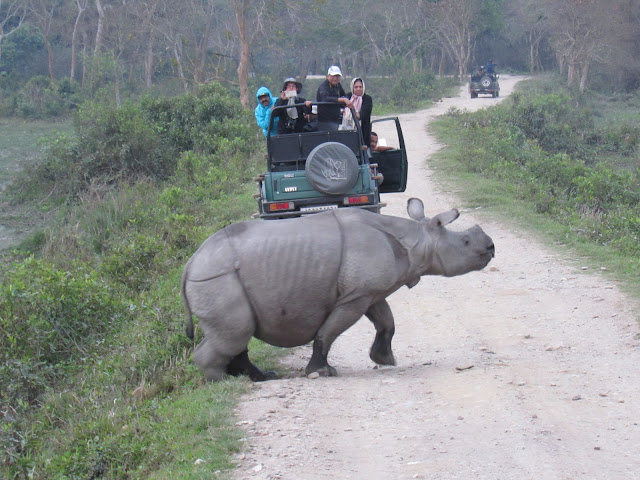 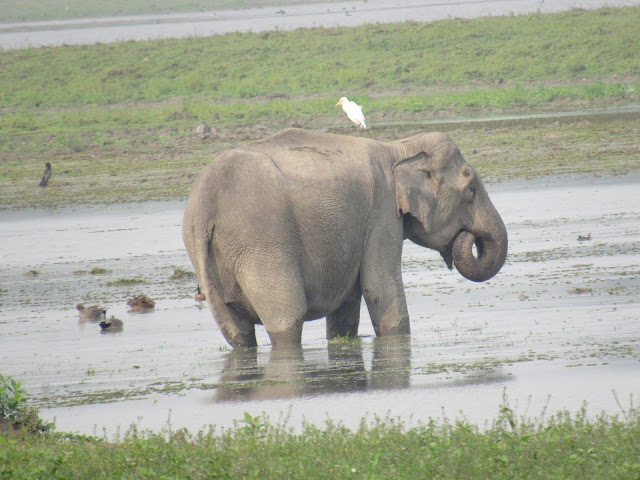 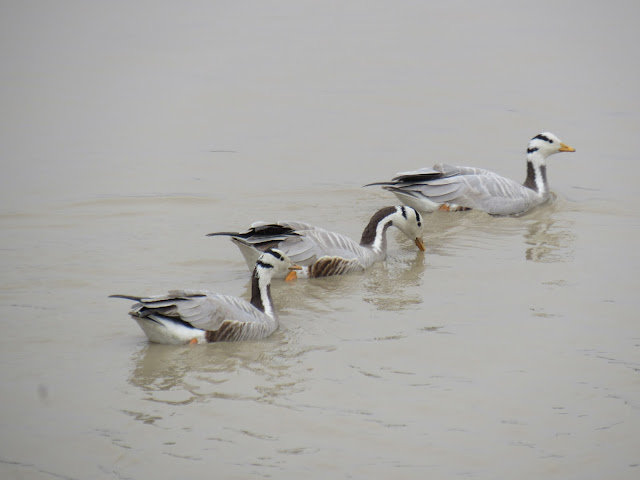 Today we left for Pobitora. Out of 4 zones , we have covered Central, East and West zone and left out only Burapahar which is 45 Km from our resort. The safari jeep charges Rs 2750 for pick up and drop at the hotel as per rate chart. We were told it is not interesting. We went to meet Gobindo at Camp Rhino resort (it is on the way Guwahati and Burapahar). After meeting them we left for safari at Pobitora ( it is around 20-25 Km from Guwahati and 20 Km from the main road of Guwahati) and they will skip the safari and left for Shillong.

In Pobitora the rates are lower compared to Kaziranga. 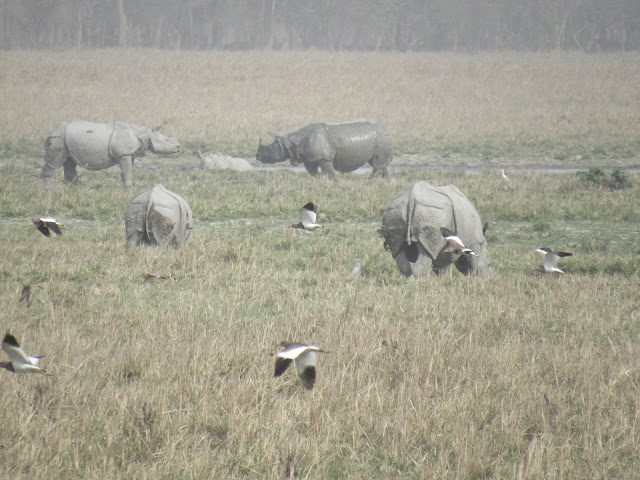 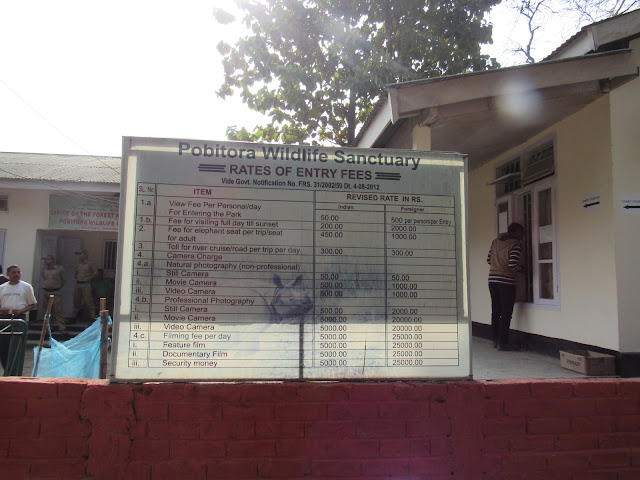 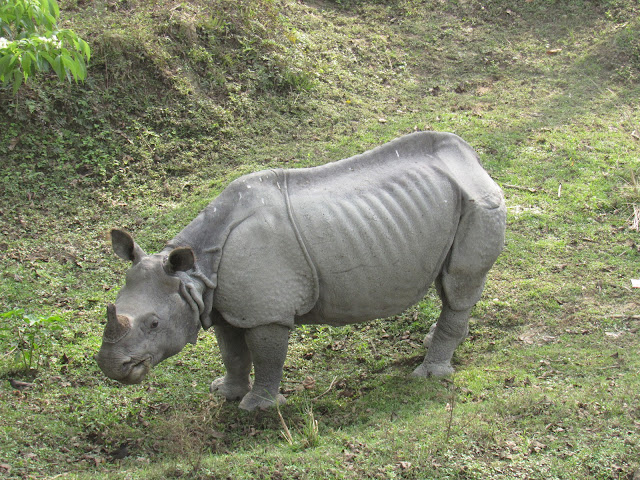 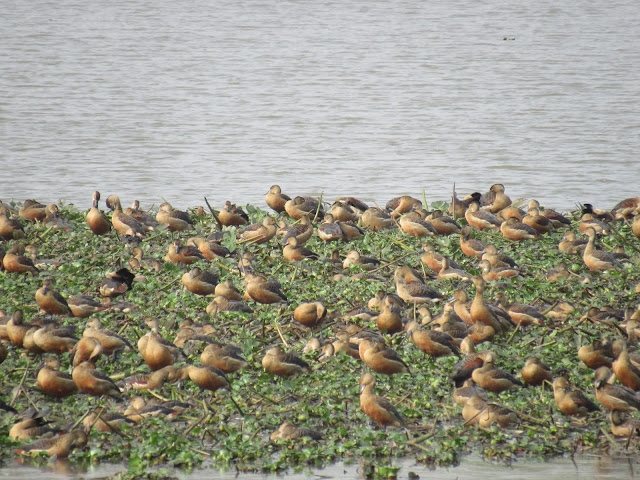 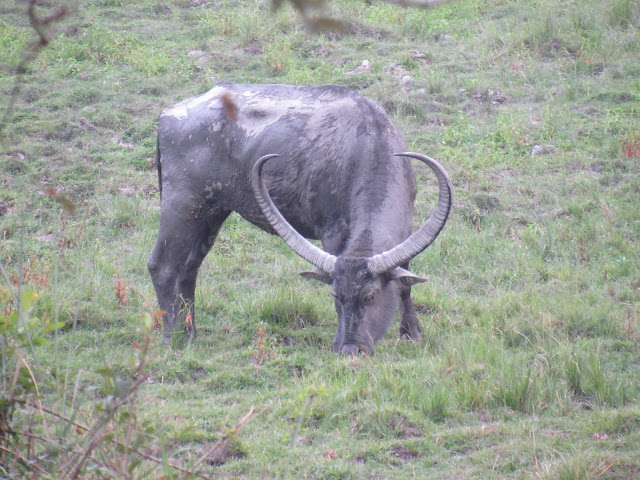 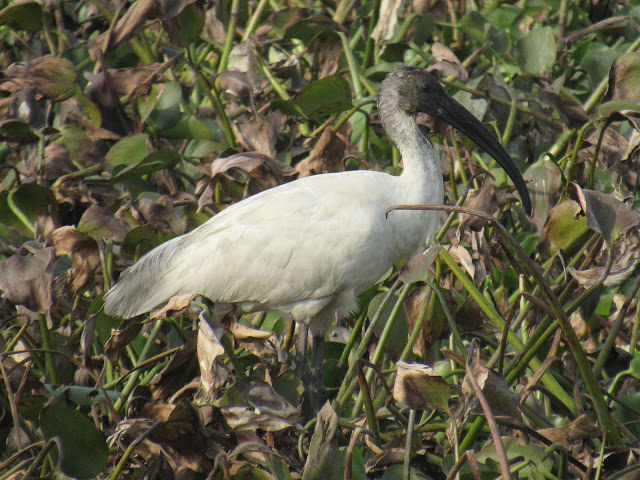 There is no tiger in Pobitora. Actually on the way to Pobitora - you can see Rhino.

After doing the safari at Pobitora we left for Guwahati airport. The road towards the airport is not very congested. But it took around 1.30 hours to reach Guwahati airport. We dropped Anindya and Isabella on the way - they will go to Shillong.

This trip was very effortlessly the trip of a lifetime for our family. My family was truth surprised care they have for us. Really we have lot of enjoyment. I was really worried about taking care of my family.Atthe time that travel agent help to me. I positively spent a fair amount of time after the trip worrying about it. Really we got a truly genuine and very low stress travelling experience by booking this company. The trip itself was remarkable and again, so thankful to our agent for what he and his team did to make this wonderful experience comes true. It is wonderful place .I have called to m my friend and relative voice and video calls. They are told very nice and fantastic place.
The daytime trips we had were the perfect mix of fun, education, and relaxing. Everywhere we felt that we had the right time, and we made the right actions for our taste.
On the way, our travel agent checked with guides to do everything correctly. He met with her after the trip, so I can make sure everything was fine. As us as a travel agent, he asked the driver to drive it through the express mail for our channel. This is a good gesture, not everyone has done anything. He sent us a welcome gift and honeymoon gift to the hotels. apply pan card online
He really cares for his customers and we hope we will again travel to Vietnam or surrounding areas, so we can reuse his services again. Lovely hotels, amazing tourist guides, and drivers - would not be cheaper if we chose this trip. The travel company and the all-in-one's strong partnership are of great benefit to travelers. Experience, talent and emotion to give you the experience of experience and experience have helped us to give you full details of the scenes in India.