Breathtaking Sundarban Tour point to point at 60/- through an unconventional route !!

We (Tutu and I ) started at 4.30 a.m. to catch the train to Namkhana from Ballygunge station (leaving at 5.15 a.m.). (The first train leaves at 4.05 a.m. and then 5.15 a.m., 6.50 a.m.) Luckily my neighbour's (Tapan barman) son (they are from Durganagar, Sundarban, near Namkhana) is going there. So we planned to go with him. The train fare is Rs 20/- for 3.10 hour journey. We reached the station in time . I found it little strange to reach at that time. Because it is the time the maid servants reach Ballygunge station , when we are sleeping in peace. Almost all the passengers belong to that class. Our plan is to go to Sundarban via Namkhana which is quite different from normal beaten down route to go through Canning and Gosaba.


The train left in time. We reached Namkhana at around 8.10 a.m. Then we started walking for 25 minutes through the interior villages to reach the ferry ghat (which Tapan mistakenly said Auddy Ghat)- it is operational only during high tide. 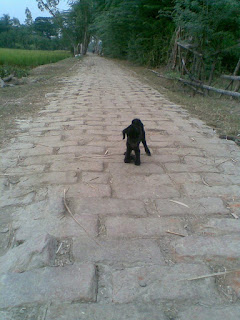 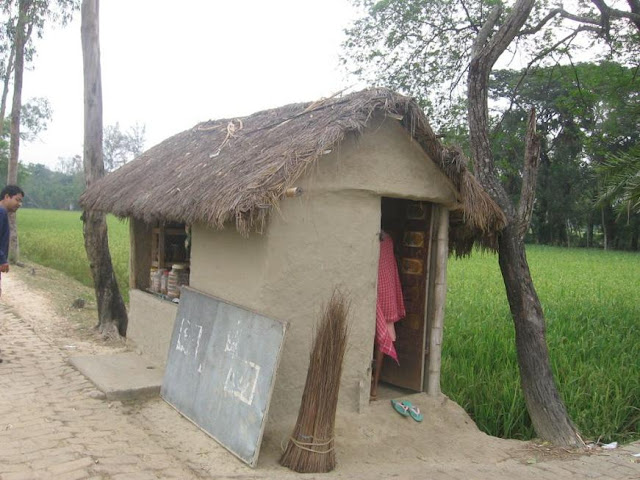 Otherwise one can get it from ferry ghat near Namkhana - I have been told. To take the boat from Namkhana, we should ask people in the station about the location of the place and apparently number of boats from Namkhana are more. 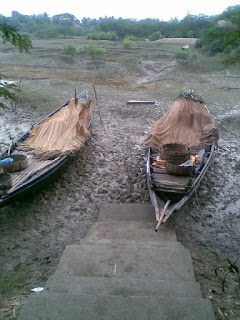 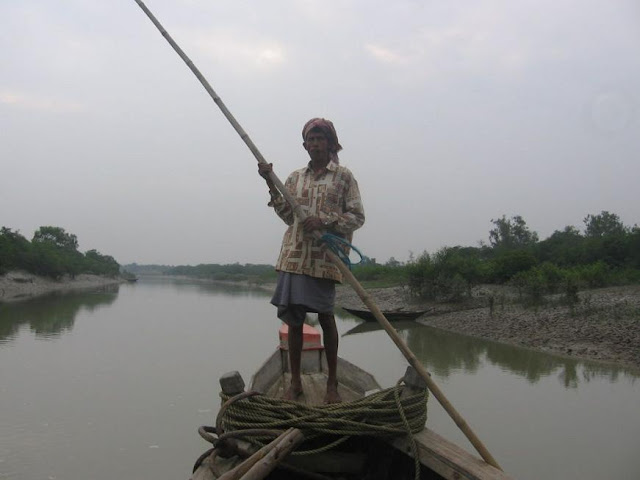 We reached Bardapur after a boat (locally called Bhut-bhuti probably because of the sound it creates - due to use of motor ) ride of almost 1 hour 40 minutes. The fare is incredibly low - only Rs 5!! 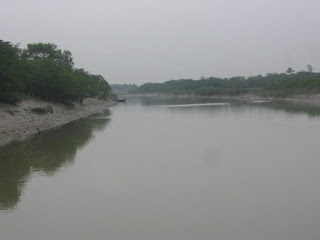 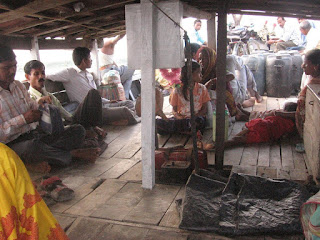 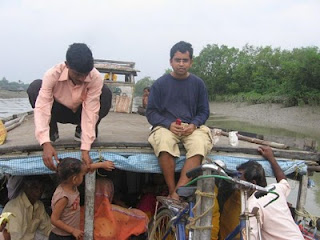 I sat on the roof of the boat. Some of the boats go directly to Bhaga-bat-pur crocodile sanctuary . There is a ferry ghat also at that place. It is possible to get down here also. But our boat goes only upto Bardapur. The boat ride was very very pleasant and it had number of stoppages at various ferry ghats. 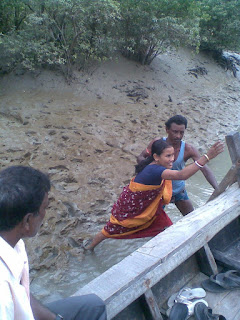 From Bardapur we started walking. We met some people from Science forum who are educating people about snake. They were carrying a chart depicting different types of snakes. We were told there is a programme in the evening. 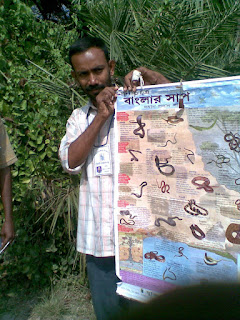 But due to the difficult terrain and lack of transport after 3.3o p.m. we decided to skip this programme. It is organized by the local Panchayat. The husband of local Panchayat was also with the members of science forum and supporting this programme. The Panchayat seat is reserved for woman. But he hinted that he is the real person and wife is kind of his stooge!! He even invited us for a lunch at his place.


We started walking all the way to Bhagabatpur from Bardapur . It is a typical village you will come across in extreme interiors of India, with no electricity. {Electricity came to Durganagar (Tapan's village) only last year. According to him after that everybody bought TV and VCD.} Radio is the main medium of entertainment. The roads are made of bricks. Some 'machine van' ply in that route. We bought a cold drink and also few bananas and some Tentul (Tamarind) chatni(Pickle) near a school - which we used to eat when we were young! We were going back against time. 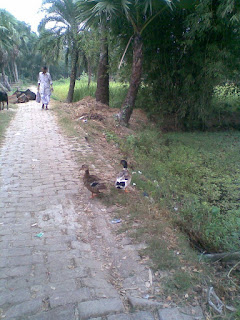 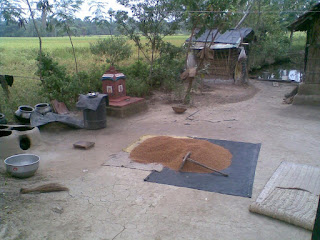 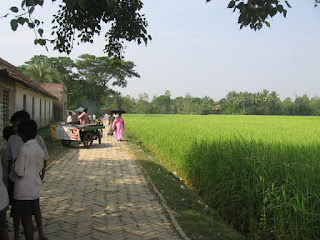 On the way,we met a guy, who is working in Gujarat and working in the blasting department of a factory. He earns Rs 6000 per month only ( it was little difficult for me to believe, since he is an unskilled labour !) because he is a learner. After his learning is over, he will earn Rs 8000 p.m. . He has gone there because of the poor salary (maximum Rs 3000 p.m.) people get in West Bengal (which is true) .
We walked more than 1 hour to reach Bhagatpur Crocodile sanctuary. After reaching there when people asked us "how did you come here" - we said we came here walking (4 Km) ; nobody believed us , they said people from a big city cannot walk that much!!! 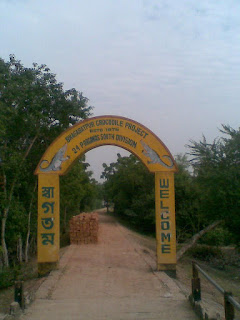 We entered the sanctuary by paying an entrance fee of Rs 10/- . The sanctuary was more or less well maintained by Indian standard!! We saw crocodile of different age groups kept in separate tanks - starting from age group of less than 1 year. There is a small museum inside - which was closed. But I made them open it!! We were the third visitor for the day!! 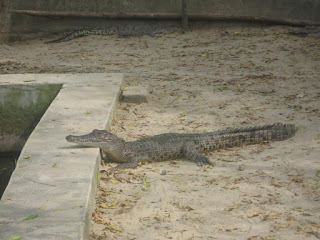 After that we had our lunch outside the sanctuary. Since nothing was available (season time is DEcember, January) - I ordered the shop to make a double egg omlette(@Rs 6/-) with bread for us. Later we had another one with a big bottle of Cocoa cola (There was no Maggi. They do not know what is Maggi!!).

While coming back we were little late - so part of the journey was by 'machine van' (For a distance of 2.5 Km) for which we paid Rs 10 (@ Rs 5 each). We were lucky to get the boat/Bhutbhuti in time from Bardapur and reach the ferry ghat near Durganagar in 1.40 hours.

From the boat it was difficult for me to get down to the shore , as the temporary ladder became very very slippery. I had to remove my shoes to get down - and in the process I had a cut in the leg from a protruded nail (for which i had to take a Tetanus in Calcutta). If this was a touristy place then the boatman would have made a false railing with the bamboo - by holding two ends of bamboo by two people, then it would have been easy for me. It never occurred to me then. Later I thought i should have told them to make it! It was difficulty even for the villagers .If I slipped , then, I would have fallen into a thick mud!!

We initially planned to go to Tapan barman's house at Durganagar to have a cup of tea and snacks. But due to the cut in my leg, we planned otherwise and informed them accordingly!

For pictures see the following link. http://picasaweb.google.co.in/bomadg/SundarbanTourAtRs60FromMyHouseBackThruAnUnconventionalRouteWestBengalIndia#
Posted by sourabh at 6:53 PM


Its a beautiful place. Each and every year several people visit this place. So, we also arrange a tour to Sundarban again!
Sundarban Tour 1 nights 2 days with attractive package!
To know more visit our website
http://www.radiancetour.com

Rachel Cavanna said...
This comment has been removed by a blog administrator.
Saturday, September 17, 2016

Hi Sourabh, thanks for sharing this beautiful article with us. I heard about the world biggest mangrove forest Sundarban. Though I don't go there. But after watching photos you have uploaded, I am really excited to make a tour to Sundarban.