Located just 82 km from Calcutta, Kalna can be an ideal pilgrimage (beautiful terracota temples, river bank) on any weekend and double up as a trip back into the pages of history.The peerless architecture of the temples of this town and their history leave few untouched. The grandeur of the terracotta structures is comparable to those of Bishnupur.The two places are, in fact, inextricably linked. In 1806, the Bishnupur royal estate was purchased by the king of Burdwan, who then settled in Kalna. Ever since, the magic of terracotta has enriched both places. The first reference to Ambika Kalna is found in a 6th century text named Kubjika Tantra. Some historians are of the opinion that during the Gupta era, the place was part of the famous Tamralipta port.

We (Gabriel,Lydie and I) left for Kalna by Katwa Local, which leaves Sealdah station at 7.57 a.m. (ticket Rs 21/-?)You have to wait at the main hall of the station, to to look at the electronic screen to know the platform no. of the train (from which it leaves).Aritra was also supposed to go (though he gave some important inputs for the train) , but he did not turn up ultimately.

The train was crowded. As usual, I went to the last few compartments to get a comfortable seat. It was the day of Rash Purnima (It is a big event in Mayapur, near Kalna), that is why the train was very crowded. The Katwa local took about 2 hours 45 minutes to reach Kalna.


Then we hired a van rickshaw (instead of cycle rickshaw from the station) for Rs 150 (but it is subject to heavy bargain) just outside the station . It was settled that he will show us all the terracota temples and river bank for around 4 hours.
Places to eat: There are several places to eat. Hotel Priyadarshini, near the bus stand offers good food at reasonable prices. However we did not take our lunch there.

Located on the west bank of the Bhagirathi, Ambika Kalna (popularly known as Kalna) once flourished as a prosperous port town. It reached it's pinnacle of glory during the late 18th century under the patronage of the Maharajas of Bardhaman, who built several magnificent temples with intricate terracotta ornamentation. The maritime trade has long stopped and Kalna has lost the status of a flourishing port city, but the temples are still there, reminding one of Kalna’s glorious past.


Apart from the temples Kalna has several religious structures dedicated to Sree Chaitanya one of the greatest social reformers of Bengal.


In 1702, Aurangazeb appointed Raja Jagatram as the administrator of Kalna, which reached an advanced stage of development under his son Kirtichandra, who took over in 1729.

Though their roots were in Punjab, the royal family of Burdwan contributed immensely to the glory of ancient Bengal. The royals were keen patrons of the arts and several temples of burnt clay - terracota were constructed during their reign.

In 1757, Tilokchand, then Raja of Burdwan, refused to help Lord Clive against Siraj-ud-Daullah. Tilokchand was later vanquished by the British in 1760 and he turned to religion for solace. His change of heart coincided with the golden period of temple architecture in Kalna. Between 1752 and 1766, 7 large and 12 small temples were built in Burdwan.

The van rickshaw first took us to the most eye-catching of the Kalna landmarks - a set of 108 Shiva temples within a single complex. Maharaja Teja-chandra sponsored the temples, completed in 1809. The project celebrated the transfer of ownership of the Bishnupur royal estate. 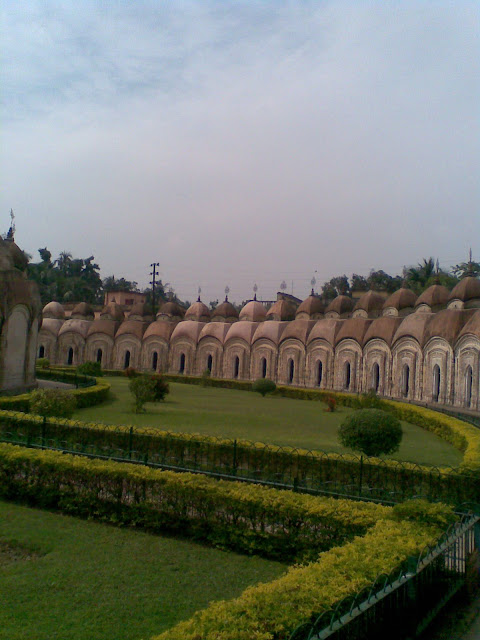 The temples are divided into 2 rows. The first row has 64 temples, out of which 32 have white and 32 black Shiva lingas. The other row consists of the rest of the 44 temples, of which two are empty. All the constructions are in the typical aatchala style.

On the other side of the road lies a walled complex, containing the most diversified form of Bengal’s temple architecture. The star attraction of the complex is the Pratapeshwar Temple - the main attraction of Kalna. Prince Pratapaditya died in 1821. The temple was constructed in his memory in 1849 by his first wife Priya Kumari., with its elegant shape and rich terracotta ornamentation. The architectural style deviates from the Bengal school and is akin to Rekhadeul, characteristic of the Orissa school. It is Designed by Ramhori Mistry, the temple is one of the best terracotta structures in Bengal. Built in Deul (Spire) style the temple contains terracotta plaques depicting themes of Hindu epic, mythical life of Sree Chaitanya, images of Durga & Ravana and various aspects of day to day life. 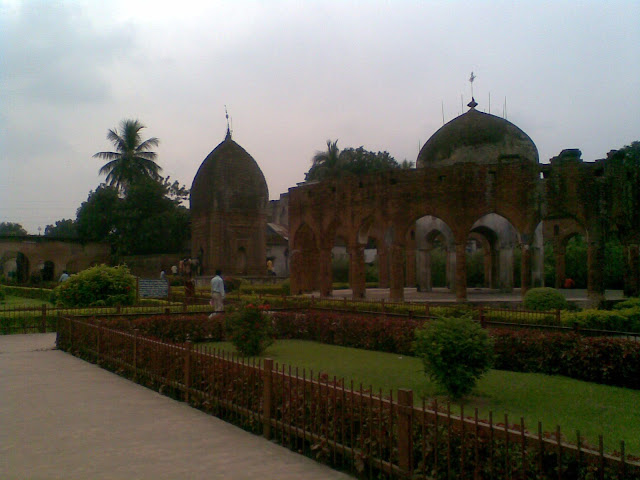 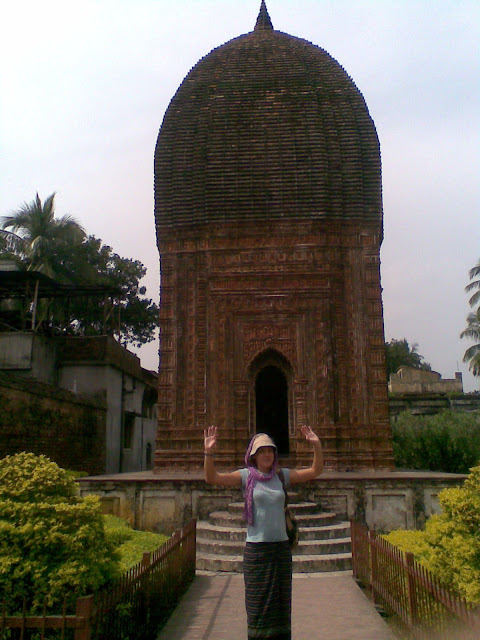 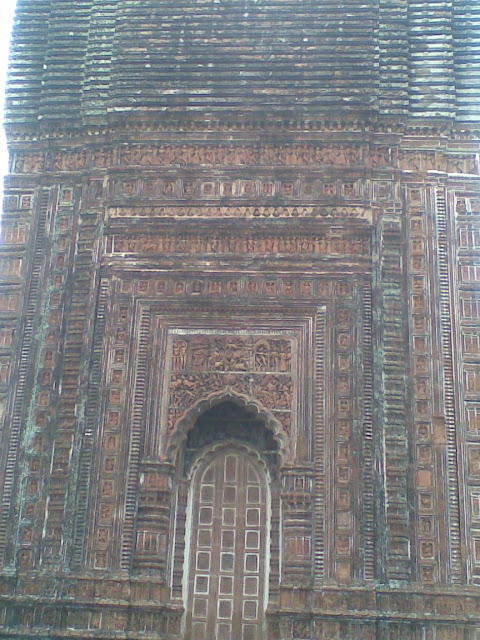 The other two star attraction of the same complex are Lalaji Mandir & Krishnachandra Mandir. Both are three-storied Pancha-vimsatiratna (25 pinnacled). The temples also have some beautiful terracotta panels. 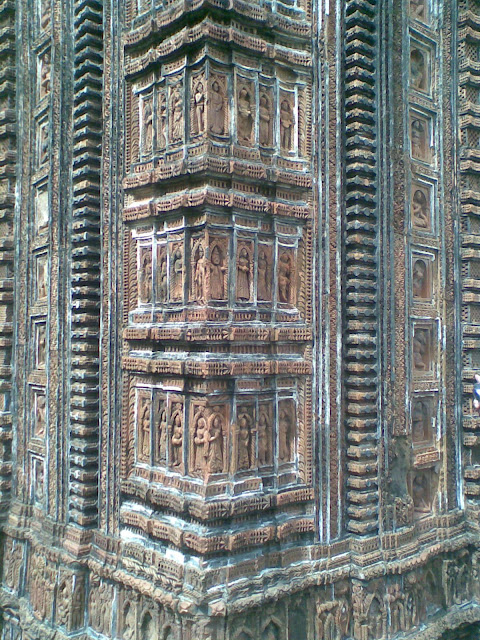 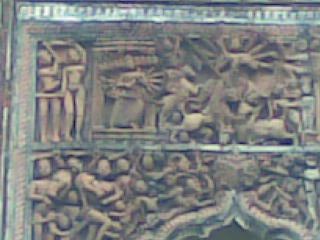 The majestic 60 ft tall Krishnachandra temple (the 25 towers of the structure are quite unique) built in 1751-55 is very similar in structure to the Lalji Mandir.This temple, too, has been constructed in the aatchala style with fabulous terracotta sculptures on the walls. Episodes of Ramayana and Mahabharata, hunting scenes, childbirth and erotica are carved to perfection. The same complex also houses several minor structures like dilapidated royal palace and the roofless Rash Mancha, several aat-chala structures among which a flat roofed temple of Giri Govardhan needs special mention. 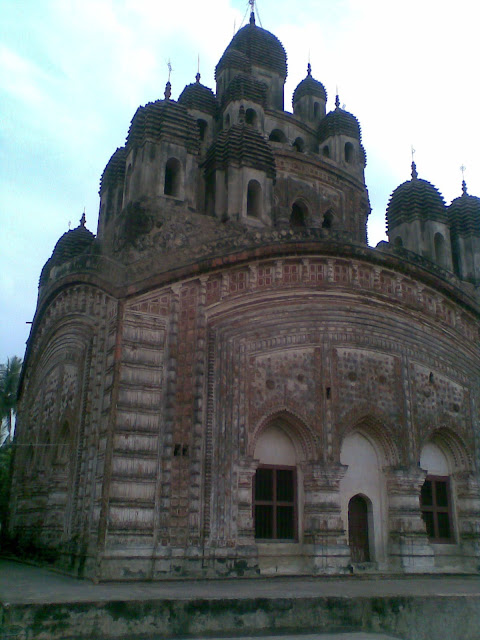 A nearby Lalaji temple, also with 25 towers,is built in 1739 and is the oldest temple in the complex. . Rajmata Brajokishori built this in 1739, after her return from Vrindavan. Garuda, the mount of Vishnu, is worshiped here. It is fronted by a char-chala (four sloped roof) mandap.
Then we went to Bhaduri-para - it also has a large collection of temples including the Panchavimsatiratna (25 pinnacled) temple of Gopalbari.

But the holiest attraction of Bhaduri-para is the Siddheswari Temple, dedicated to the Mother Goddess Ambika or Kali. Built in 1740 AD by Chitra Sen, the then King of Bardhaman, this shrine is considered to be the most auspicious one in the town. The char-chala structure reached by a flight of 14 beautifully curved steps (signifying the 9 planets-Nabagraha & the 5 tantric cults) houses the image of auspicious Bamakali Idol, built of a single neem log. The complex also contains three Shiva Temples. This is the place where you will find hari-kath signifying place of sacrifice of goats. 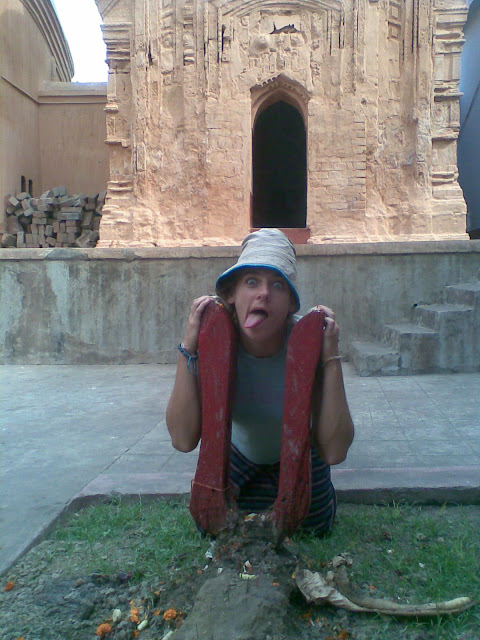 
Ananta-Basudev Mandir
The nearby (30 metres away) Ananta-Basudev Mandir is another interesting terracotta temple, but sadly only a few of the panels have survived the test of time. Raja Tilokchand's pet project was built in 1754 in the double aatchala style. The temple was renovated by the Birlas in 1964. (the van wallah initially skipped this temple , but due to my obstianance had to come back and shown the temple). 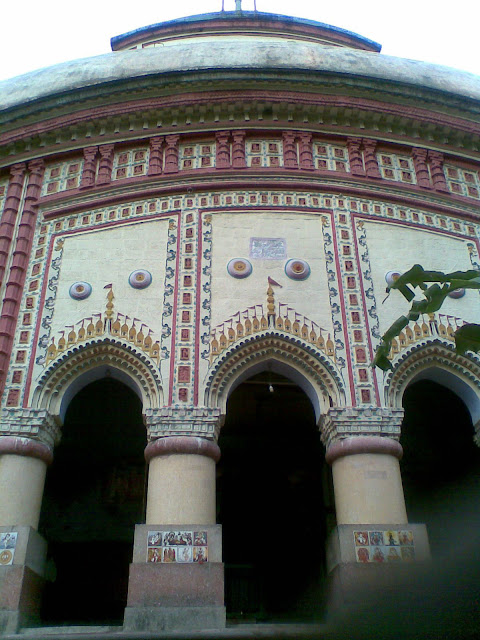 Then we went to a small temple, where we saw a group of Vaishanvite chanting and singing.We met one of them and he explained us unlike shakti (which is empowerment of woman) , Vaishavites believes in universal friendship and brotherhood. Chaitanya, who is considered as an incarnation of Vishnu and Krishna , is living example of that. some of the people nearby suggested that we should go to Mayapur (on that day itself) to see the Rash festival there.
Jagannath temple
Then we went to see the Jagannath temple beside the river Bhagirathi. We walked along the river. 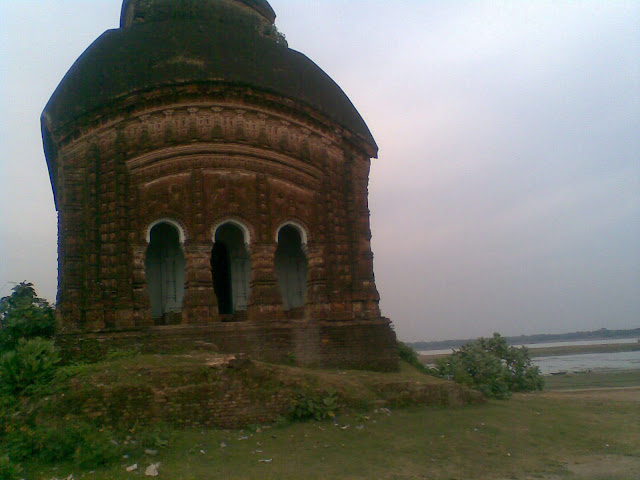 Thus proving its uniqueness as a confluence of Shakti and Vaishnava forms of worship - a trip to Kalna not only proves to be a unique pilgrimage but also doubles up as a gateway to the glorious days of Bengal’s temple architecture.
By that time it is already 3. 15. p.m. So we decided to go back to station. We heard there is train at 3.30 p.m. . But we missed the train. The next train is at 4.30 p.m. !!
Suddenly I saw a group of people (seemed to be triabls) sitting with a cock. My gut feeling said they might have come from a cock fight (morog larai). And I was bang on target!! We immediately decided that we will go to Hanspukur to see the cock fight. We again hired another van for 40/- (later we had to play 60/- , since it is further away from Hanspukur and the van waited all along for us) to reach the place. We saw the fight , which was quite interesting and learnt the rule of the game. We also learnt every year on 15th day of Kartick month this fight takes place. 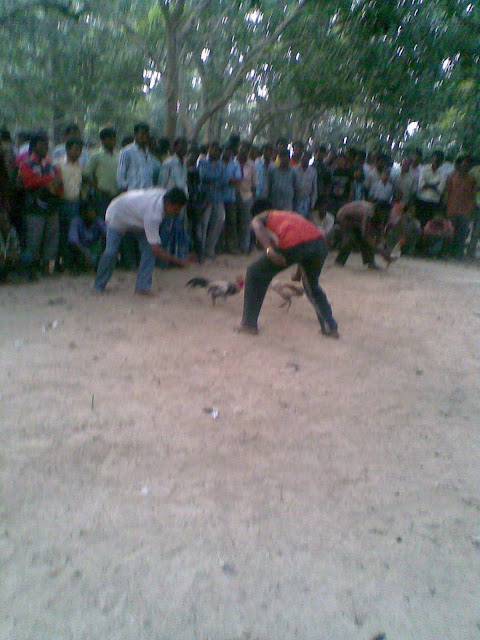 After watching the fight , we came back just in time to catch the train at 5.30 p.m. (the train at 4.30 pm has left long back). We got down at Naihati and again took a train to reach Sealdah.
The link to the pictures:

(source : information from The Telegraph, http://www.rangan-datta.info/kalna.htm & others)
Posted by sourabh at 6:39 PM