I went to Bangalore with Sidhu and his brother Papu. We stayed in Bangalore almost a month.
We stayed at the Papani uncle’s (and Sushila aunty) house in Rajajinagar, Bangalore. Papani uncle is a Retd. Col. He stayed in Barrackpore for some time, when he was in army. He sometimes surprised me with some Bengali words.! Now he is a devotee of Saibaba and sings prayer everyday very loudly in his house. The climate of Bangalaore is very good.

Viju aunty also came with her daughter Nirupama to Bangalore (from Madras ) during that time. Viju aunty was born in 1947, that is why her name is Vijayalakshmi. When I played pranks with Nirupama , she will say with her un imitable tone Chchiiiiii!
Sidhu’s mother is a south Indian and father a Bengali. It was great to see their culture from close quarters. I really enjoyed their hospitality. They are really very nice people.
We also stayed at Tata’s (T pronounced like T of Tanpura) house at Yeshwantpuram. I really liked Tata and Jayant. We went to see Sanky Tank which is similar to our Lake area. We even went to a home warming ceremony in one of the relatives’ house .There they gave us a coconut!!

I also went to Tutunda's house and stayed their house one day.He stays in IISC campus.They were married last year.The campus is really good. We had a wonderful dinner after having uninspiring non vegetairan south Indian food for number of days. It was a great relief!!

We also went with Tata to a club for lunch.I had one of the finest Chicken Tikkas there .Non Veg is really cheap in Bangalore.I think the total bill was Rs 92.


We went to see Tipu Sultan’s Fort , Lalbaugh – which is really amazing. They did not let us pay for anything – even bought the tickets for us.

I returned with Papu , because Sidhu decided to stay longer. We went to Viju aunt’s (and Keshav uncle) house at Madras to take the train to Kolkata. We went to Mahabalipuram and Kanchipuram from Madras. We stayed in Madras for a day or two.
Posted by sourabh at 10:40 AM 1 comment: Links to this post

Email ThisBlogThis!Share to TwitterShare to FacebookShare to Pinterest
Labels: India, Karnataka, Travel, Vacation as a student

I am a rationalist and humanist. I am concerned and disturbed when I see people believing mumbo jumbo. I was introduced to Rationalism by my father's friend Kamal Bhattacharya. He gave me few books of Rationalism published by Utsha Manush. Then I met Mr R K Jain in who gave me 3 books written by Mr Prabir Ghosh, "Aloukik noi Loukik", it sort of changed the way I used to think about lot of things. 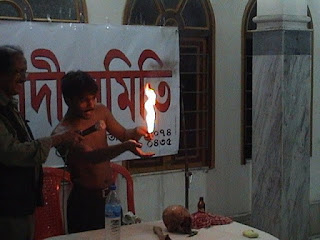 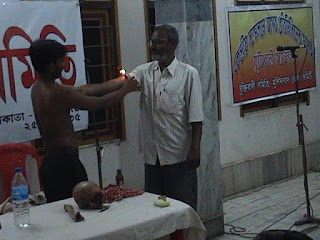 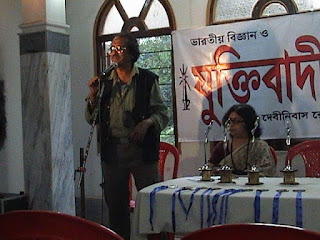 Prabir Ghosh and Sumitra Padmnabhan - dedicated their life exposing charlatans ,astrologers and fake babas and person claiming to have supernatural power. The annual conference of the organization in 2006 at Behrampore, Murshidabad.
Posted by sourabh at 4:58 PM No comments: Links to this post