In the land of Jim Corbett , India 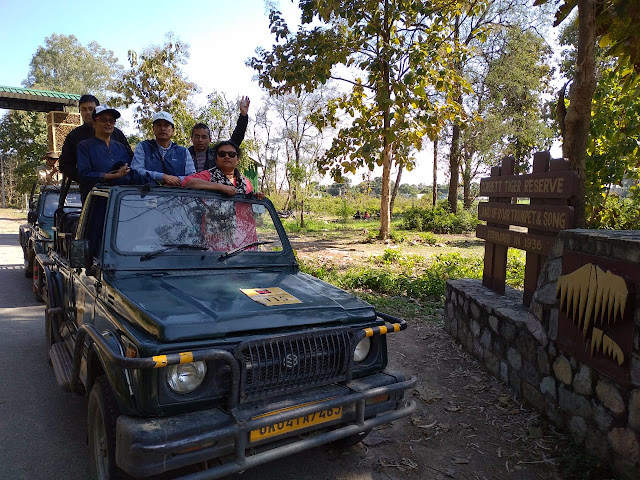 We left at 3.30 hrs (by yellow cab) from our house and picked up Subir-da and Swapna di near RN Tagore Hospital and left for airport and reached airport at 5.00 hours. We met Arun and Mr Lahiri (86 years old) at the airport.
We reached Delhi airport at 8.30 hrs.
Get in
It is normally accessed from the town of Ramnagar and Kotdwar.
Kotdwar and Ramnagar can be accessed by train from Delhi.
There are 4 airports near Corbett National Park : 1. Pantnagar (123 KM Away) 2. Dehradun (176 KM Away) 3. Delhi (248 KM Away) 4. Lucknow (447 KM Away)

Dehradun airport is the nearest airport to the park .

We left for Ramnagar (the gate nearest to it is Bijrani) from Delhi Airport at 9.30 hrs. We booked 7 seater car - Chevrolet Enjoy. We tried various options - people were asking Rs 18,000 - 20,000 . Ultimately we settled for online booking (from Gozo Cab). They are very professional company - with a 24/7 call centre and emailed everything in advance : www.gozocabs.com/ . They charged Rs 12,469/- excluding Toll Tax and permit. Highly recommended. One can also book from MakeMytrip.com or ahataxis.com . This is much better than, other offline services, I ever had. 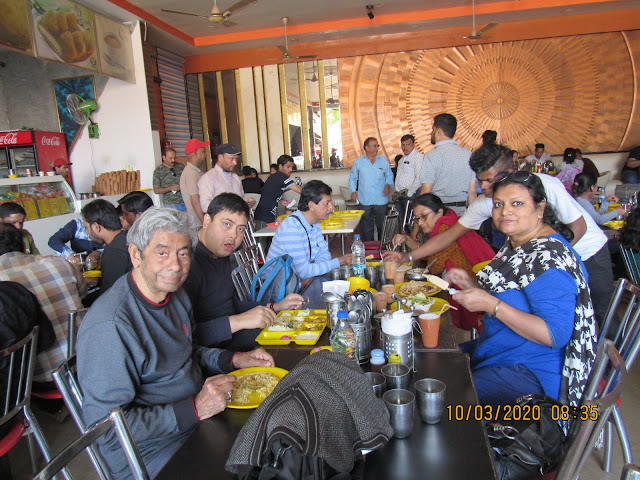 One should  ideally stay near Bijrani gate to cut down the travel time. Most of hotels are near Bijrani Gate - including Taj, Club Mahindra. Our resort is at Merchula - 35 Km from Bijrani. We reached at 6 pm. We stopped thrice - once for breakfast near Gaziabad, once for lunch and lastly to meet our guide Mr Arif near Bijrani gate. So it took 8.30 hours to reach Merchula from Delhi !! We reached Bijrani at 5 pm. We are staying at Sterling Resort. Mr Lahiri is long time member of Sterling. We paid only Rs 1000 per day for 4 star facility, thanks to him ! The location of the resort is simply amazing. 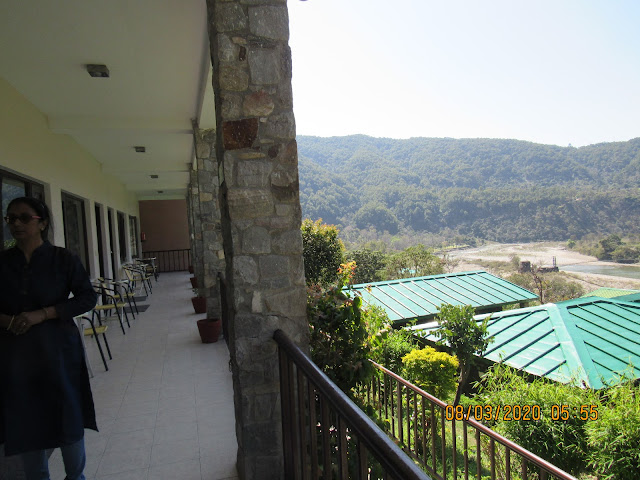 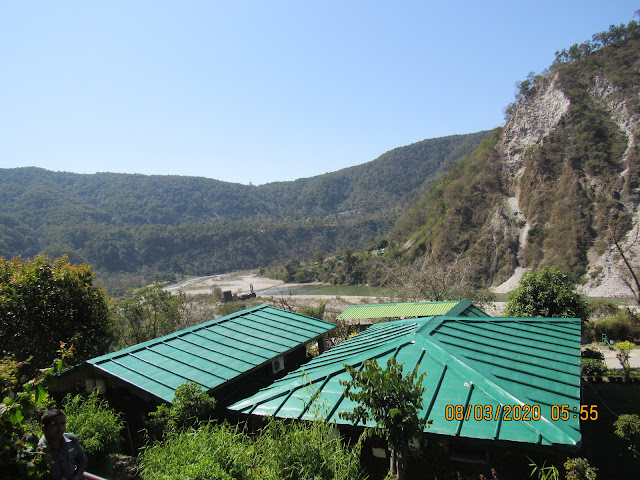 However it takes 1 hour to reach Bijrani and 1.20-1.25 hours to reach Dhela Gate. I would recommend do not stay in Sterling - if you do not spend all the time travelling. The morning safari ends at 10 am and evening safari ends at 6 am. We are almost fined for finishing the evening safari at 6.05 pm !
We had our dinner quickly since we have to get up at 4.30 am and leave for Bijrani at 5.15 am.

When we left it is still dark. We reached Bijrani at around 6.15 am. Since I was busy with my Myanmar tour I had to partly outsource the job of booking the permit (and also safari car - gypsy, safari driver) to my trusted and very knowledgeable friend Avijit Ganguly who runs a wildlife magazine Aranyok and a "Company" for Wild life safaris (only). The rates have been very reasonable (later I found out, on my independent research) .


+91 98319 18004
xxxxxxxxxxxxxxxxxxxxxxxxxxxxxxxxxxx
The park was originally named the Hailey National Park after Governor Hailey and was created on August 6th, 1936. It was India's first National Park.
After independence, the park was renamed, this time after the Ramganga River, and was hence called the Ramganga National Park.
The park was renamed again in 1957. It was named after Edward James "Jim" Corbett who helped to set up the park and spent most of his life in the area. The area of the park was increased in 1991 when the Sonanadi Wildlife Sanctuary was added to the park.
Spread across the districts- Nainital and Pauri, the Corbett National Park covers an area of 1288 sq. km, together with neighbouring reserves- Sonanadi Wildlife Santuary and Reserve Forest (Area of the Jim Corbett Park is 520.82 sq km excluding Sonanadi Wildlife Sanctuary).
Altitudes inside the forest vary between 400 m to 1200 m and the landscape is a wonderful mix of open grasslands interspersed between dense vegetation predominantly by Sal and Peepal Trees, lakes, hills, marshes, Ramganga river flowing like forest veins.
The main areas (Dhikala and Bijrani) of Corbett National Park are closed from 16 June - 14 Nov for the monsoon season. Jhirna and Sitabani (Buffer Zone) remain open year round.
Chances of sighting tigers can be significantly raised by staying at Dhikala Forest rest house & leaving early morning for Safari, as Dhikala is rest house is in the core area of jungle. 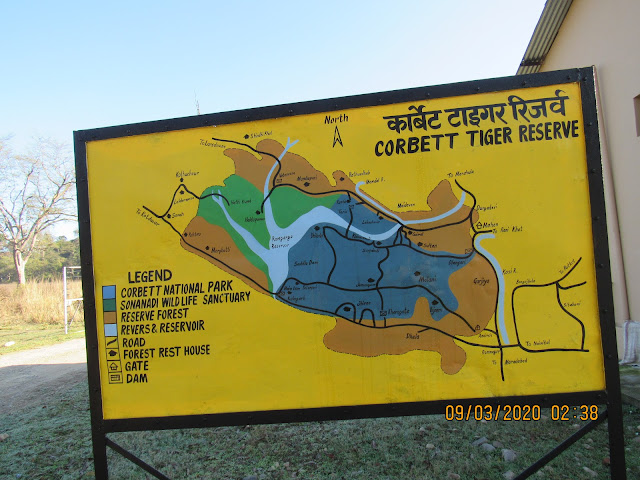 It is one of the most popular destinations in Jim Corbett National Park for tourists. Dhikala, located near to Patil Dun Valley, offers an amazing and uninterrupted view of the valley. There is a watchtower near Dhikala, which gives the more imposing view of the valley.
Corbett is the only major tiger reserve to offer accommodation in forest rest houses inside the park. However, the number of rooms is very limited and they get sold out like hot cakes. The majority of visitors stay in resorts outside the park.
Bijrani

Bijrani area was once formed part of a shooting block. This shooting block area covers the entire in and around area of Bijrani. This place was most famous during the British time for hunting. Bijrani terrain is drier in comparison to Dhikla and it also has more diverse vegetation then Dhikla.
It is the closest entry from Ramnagar. Numerous birds can be spotted on the way to forest rest house, an erstwhile hunting complex now converted to accommodate visitors.
Bijrani is an absolute wilderness especially when night falls as there is no electricity here (be sure to charge your camera batteries) and we are provided only with solar lamps. There is no mobile connectivity too which makes it the perfect retreat for a digital detox. Landscape in Bijrani is a mix of river plains and open grasslands.
Jhirna and Dhela - same entry point
Jhirna is a rest house which lies inside the south area boundary of the park. This rest house is located on the road from Ramnagar to Kalagarh. The landscape in this area is drier than Dhikla. Jhirna was one of the farming village till 1994 and after that, it was taken under project tiger.
Durga Devi:
Durga Devi is a gate on the north-eastern side of Corbett National Park. It serves as the entry point for the Lohachaur Guesthouse inside Corbett. This part of the trail in Corbett runs along the hills and crosses the Ramganga River on the way to the guesthouse. The Ramganga River flowing through this area finally drains into the Ramganga Reservoir in the Dikhala Zone. This is a hill road with the valley on one side and the mountain on the other.
The area is said to be populated more with leopards and elephants, but occasionally one may spot the tiger here too. It is paradise for bird watching. Varying altitudes along with dense tree cover provides excellent opportunity to spot birds.
It falls between Merchula and Bijrani. So we saw it on the way to Bijrani / Dhela from our resort,every day.

It is home to approximately 110 tree species, 50 mammals' species, 580 bird species, and 25 reptile species that are found both in the lower and higher regions of the park.

Species of Birds are divided into 5 categories in Jim Corbett National Park:
Water-birds and Waterside-birds:

There are about 15 kinds of duck and a variety of wagtails.

Jeep Safaris in the Dikhala zone are only allowed for people who are staying inside the Park in the forest rest houses in the Dikhala Zone.
Elephant Safari: Elephant Safari is no more available in Dhikala zone .
Canter Safari: This is an open bus with 18 seats. This safari operates only in the Dikhala zone and is accessible to tourists not staying within the Park's core zone. It approximately lasts for 6 hours with pick up points at Ramnagar and the Dhangari gate.
Buy
You can buy souvenirs and books at the canteen at Bijrani.
Lodging
Few guest houses are available. Dhikala and Gairal being the most sought after. This rest house is high in demand so it is always advisable to book well in advance. Maximum stay of 3 nights at a time is permitted. Electric fences are present around the housing area.
There are a few local companies like 'sam's travel house' that offer to do the entire package [pickup from Ramnagar station, booking in the Forest Rest House in Dikhala and jeep safaris] that can be booked online.
Alternatively, one can look at staying in one of the numerous resorts, lodges, hotels outside the core zone on the road running north-south in between Sitabani Reserve and Corbett National Park. These places organise permits and jeep safaris for the guests and provide basic to lavish accommodations along the western bank of the Kosi River .

How to get Jim Corbett safari permit

Accommodation can be booked 45 days in advance. Booking for a day visit is a permit to enter the particular zone. For Dhikala alone, staying in the forest rest house is mandatory for going on a jeep safari.
But there is a canter ride that can be booked 30 days in advance (limited to 16 seats). One needs to note that except Dhikala zone, safaris can be done by only booking day visits and staying at resorts/hotels outside the park.
A naturalist must accompany in each vehicle and maximum of 6 people can be accommodated in a jeep (excluding driver and naturalist).

Points to note about the Park

§  Permit is required to enter the forest.
§  Cancelling or rescheduling the permit is not allowed after booking.
§  Entry is restricted only to the zone for which permit is obtained.
§  Walking or trekking inside the forest is prohibited except few places.
§  Private vehicles are not allowed inside. We need to hire Gypsy from registered vehicles.
§  Proof of identification (PAN card, Voter ID etc) has to be shown at the entry of each zone.
§  Canteen food is available only at Dhikala, Bhijrani zones.

Each zone opens and closes at different dates. Safari timing differs too across months depending on sunlight. We have summarized various zones and its open period here.

Although forest rest houses are the ones which are easily suited for safari purposes, there are many hotels and resorts in the periphery of the park. Some are budget friendly and some luxury.
Corbett  Motel is a budget accommodation located on a mango farm. A good value for money in the range of 1500 INR – 2000 INR per day. The food here is very good. The hotel owner Mr. Ranjith can also help you arrange/book your safaris and jeeps. You can reach them at 05947-253033.
Tiger House Corbett is another mid-range hotel located little further from Ramnagar. You can check their website for details.

09/03/2020
Today our monring safari is in Bijrni and evening safari is in Jhirna. (Both Dhela and Jhirna gates are same - then it moves in two different directions.)
The birds and animals we saw are : 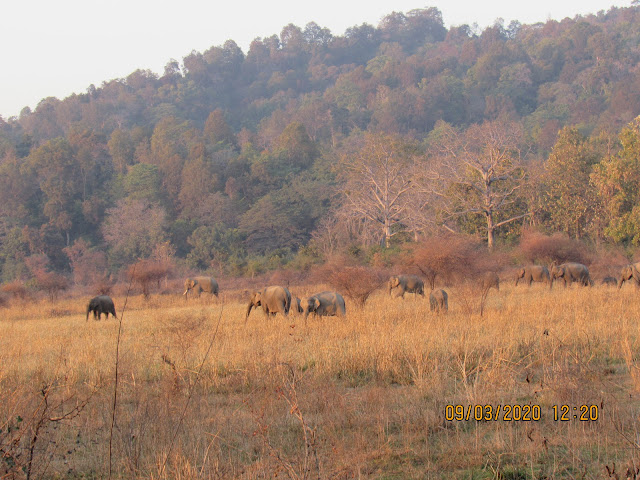 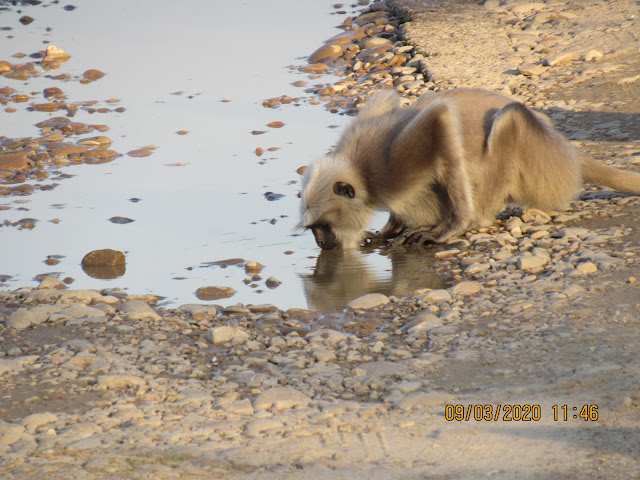 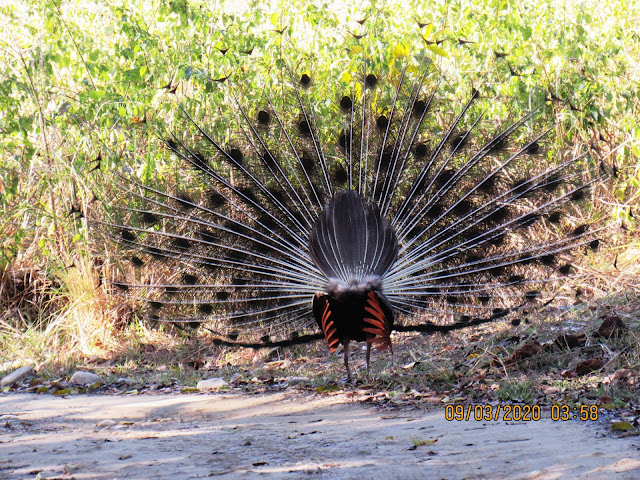 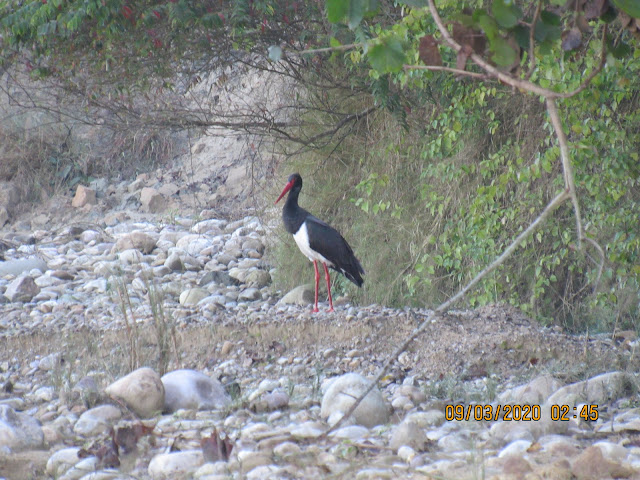 The nearest destination you can go from Jim Corbett National Park are:

1. Nainital : Its a very good hill station around 60kms from the National Park. This is a good birding zone too.

2. Ranikhet : Its also around 80 kms from the national park