We left for Gadkhali by Tata winger from Tottee Lane (at Sudder street) by Tata Winger. From the ITC Sonar 5 Star hotel side towards Ruby hospital, you have to take the road towards left , JUST before the bridge - to go towards Gadkhali. 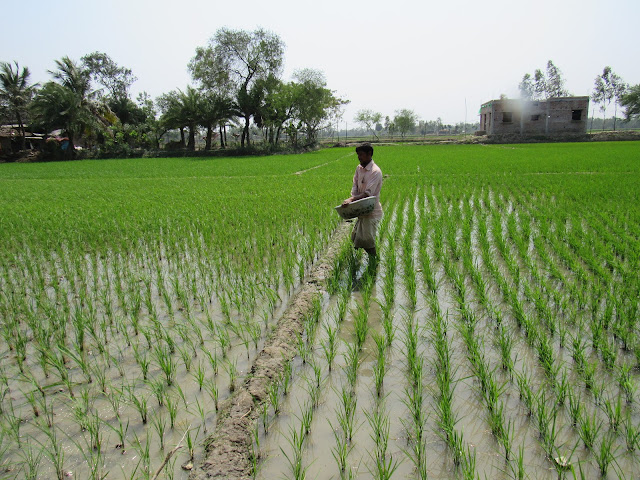 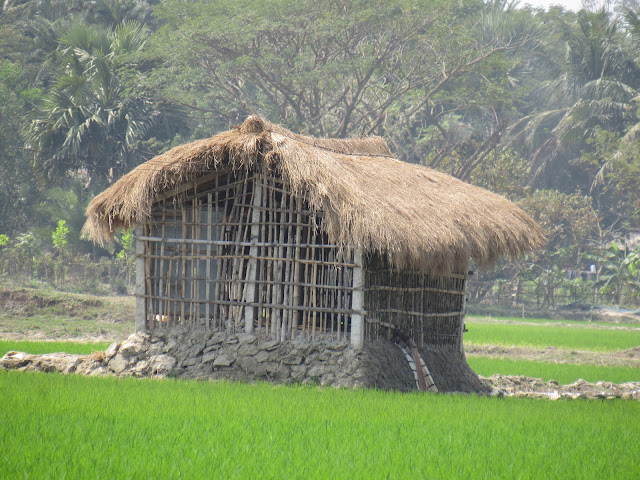 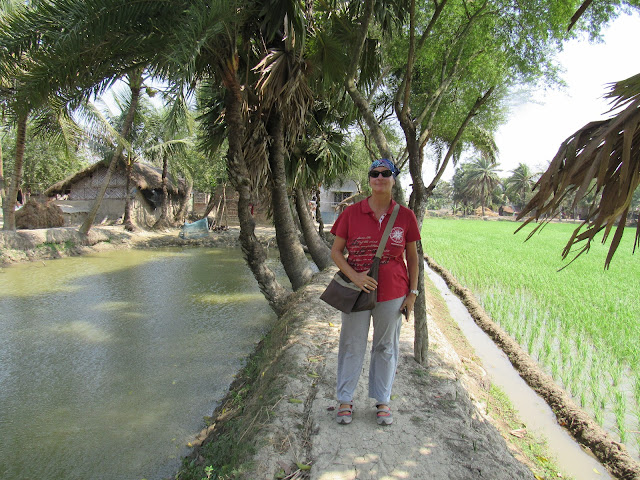 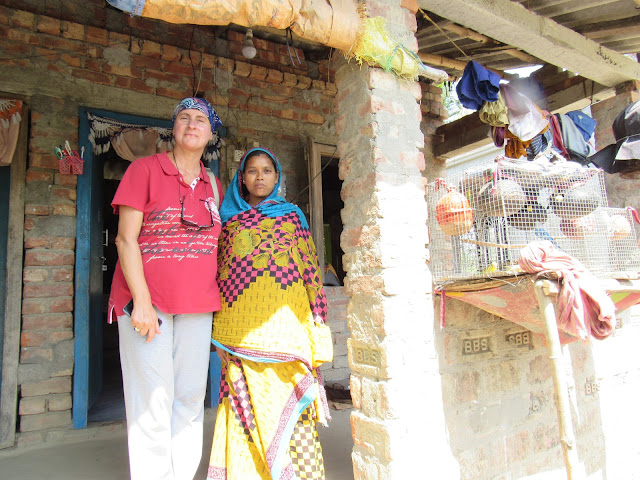 At Gadkhali one can cross the river to go to the other side which is Gosaba - the main market and locality in Sundarban.

We were told that there is a plan to construct Gosaba bridge. From Gosaba one can take an share auto  rickshaw and reach ferry ghat in more than 1 hour at Dutta River. From there you have to cross the river and then proceed towards Satjelia - where the resort of Rajesh of Tour de Sundarban is located.

However from Gadkhali , we boarded the steamer and our steamer started proceeding towards Satjelia. On the way we saw the sign board of Sundarban tiger camp at Dayapur.

Sundarban consists of around 104 riverine Island , out of that only 48 is inhabited. The water here is backwater and not tributary of Hooghly. Since water is saline not many living being can survive in this atmosphere. The trees of Sundarban are not tress , in fact they are shrubs or bushes - that is why it is so difficult to spot animals. The Mangrove forests because of saline water either use the root to get oxygen or the in some trees/bushes roots are stilted. 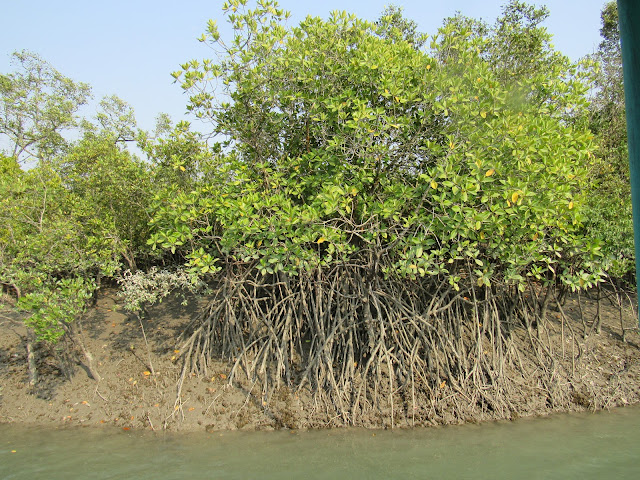 People go to collect honey only 2 months in Sundarban from April to May, after taking prior permission. They have to sale a portion of the collection to Govt at pre-determined price of around Rs 150. They sale the honey in the market at Rs 220 approx. Apparently these honey bees come from Himalaya. They collect honey from 3 flowering plants here - that is why the honey is very tasty. They normally collect around 60-100 kg honey during the season. People here are either agriculturists or collect honey or catch prawn / crab to survive.

We reached our resort around 1.00 pm. The resort is indeed very nice. After having our quick lunch we left for a waking tour in the village at 2.30 pm. We learnt most of the people cannot grow winter or Rabi crop because of lack of sweet water. Then we left for evening safari at 3.30 pm and went to one of the creeks. It looked like as if we are in Amazon!  We caught some crabs are getting down from the boat. 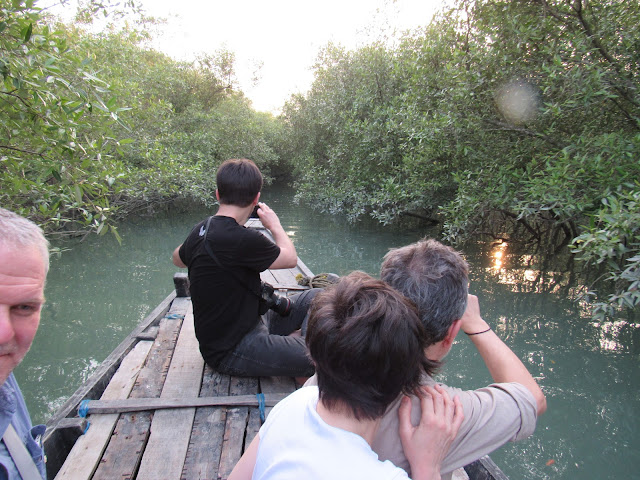 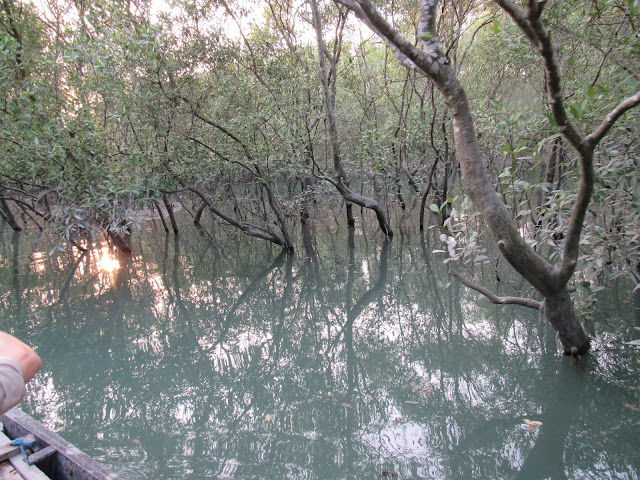 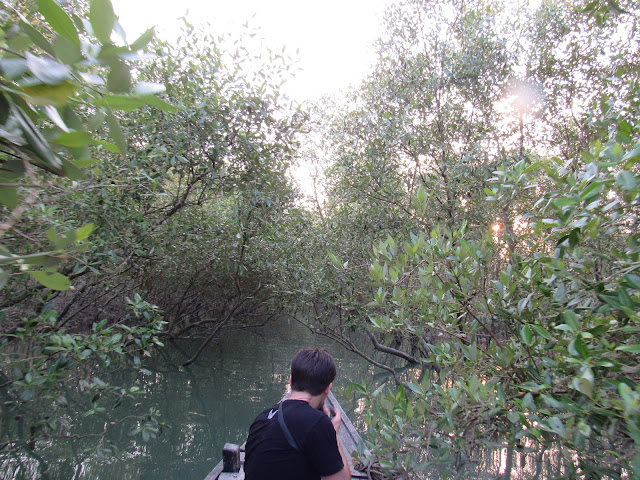 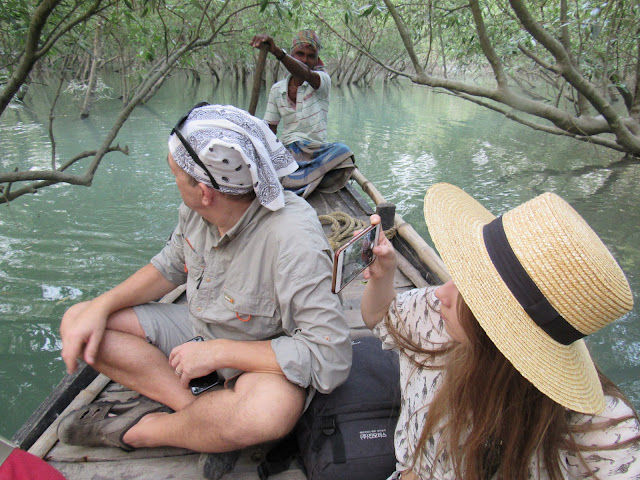 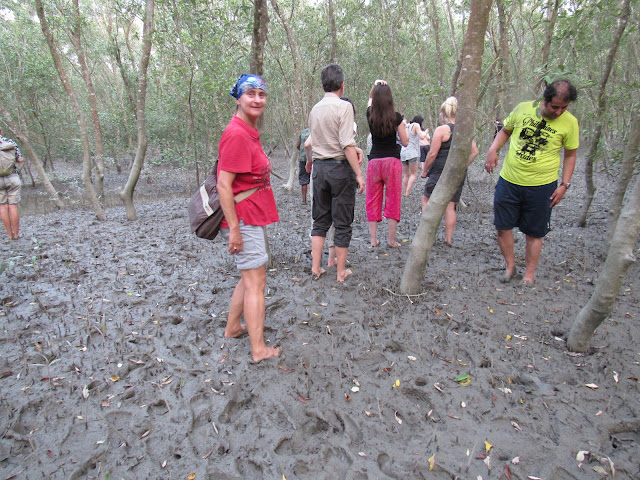 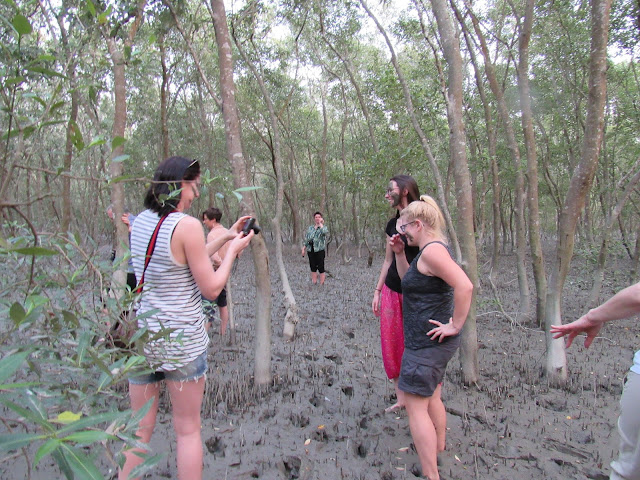 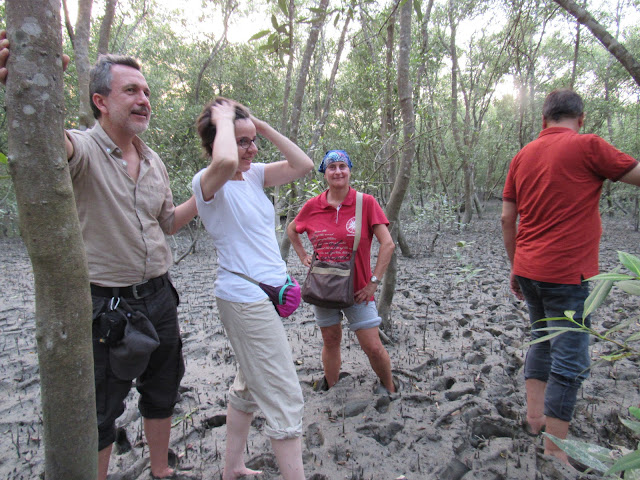 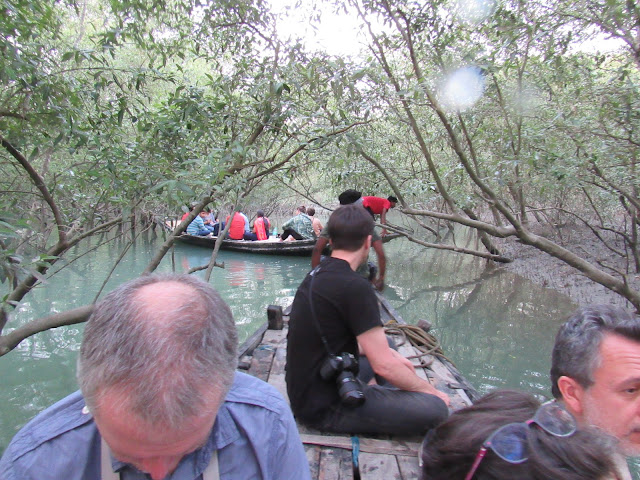 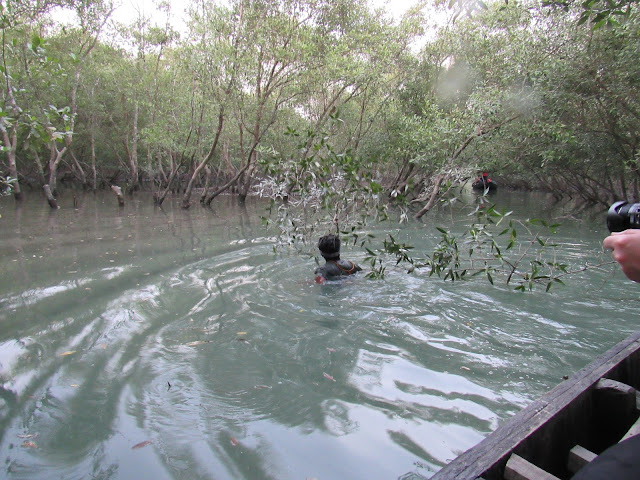 We came back at around 6 pm. After having our dinner at 8 pm ,  it is again time for night safari. Due to full moon we could not see the light emitting "bacteria". 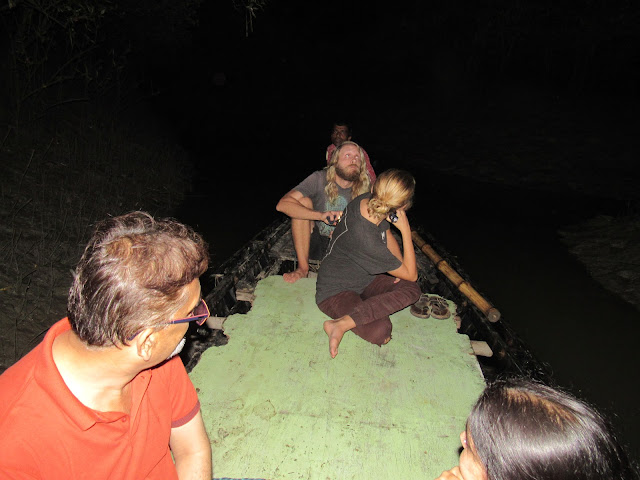 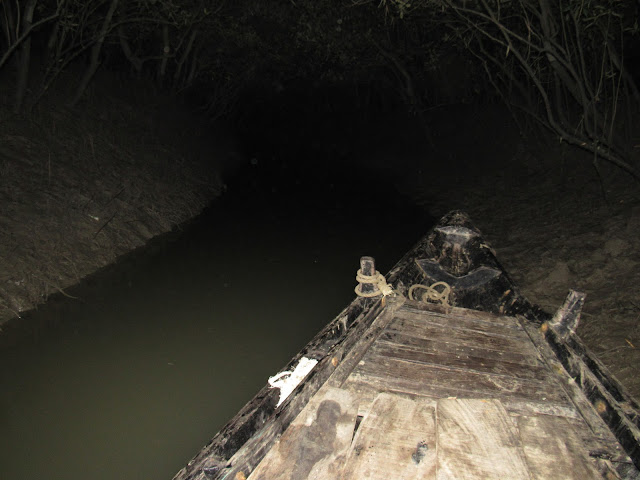 After returning to our resort we heard some baul,bhatiwali and kirtan song.

Today we left early at around 6.30 pm for Dobanki and Sajnekhali. We got our permission form Sajnekhali. I driving my skill in riding the lauch ! 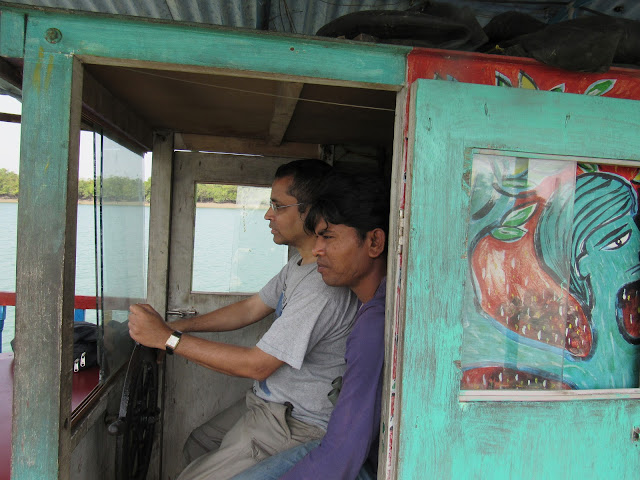 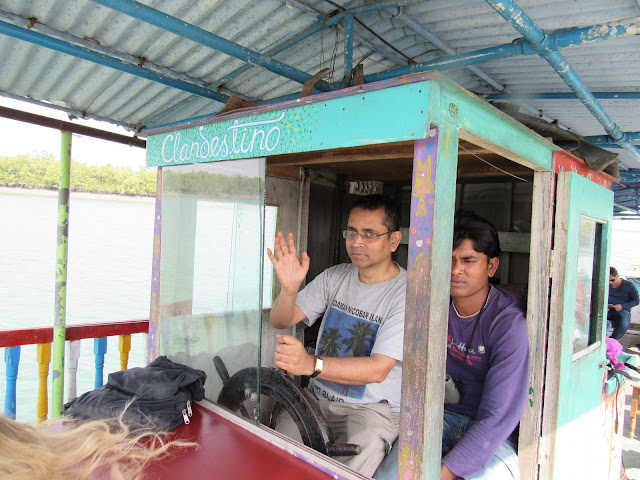 Dobanki is quite fire - but is not interesting at all. However we saw some Rhesus monkey, monitor lizard, spotted deer, wild boar,shrike,green dove, common kingfisher at Sajnekhali watch tower and also crocodile. 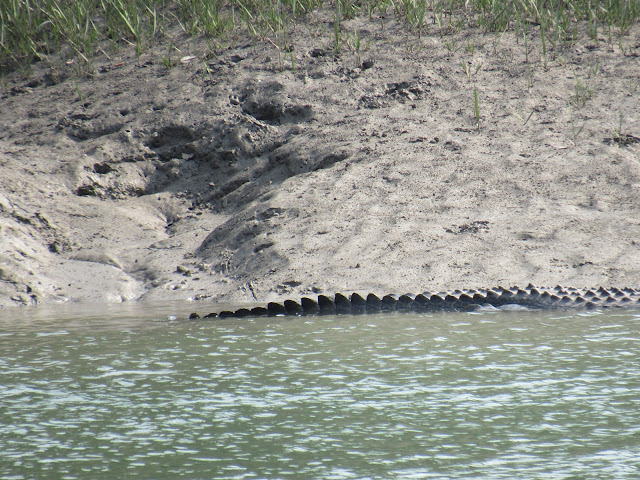 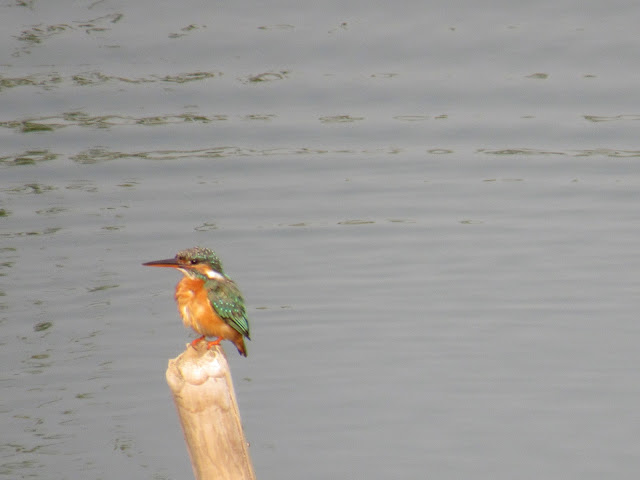 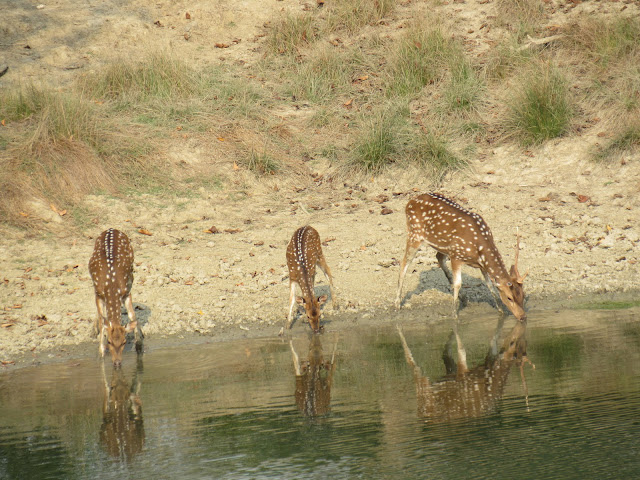 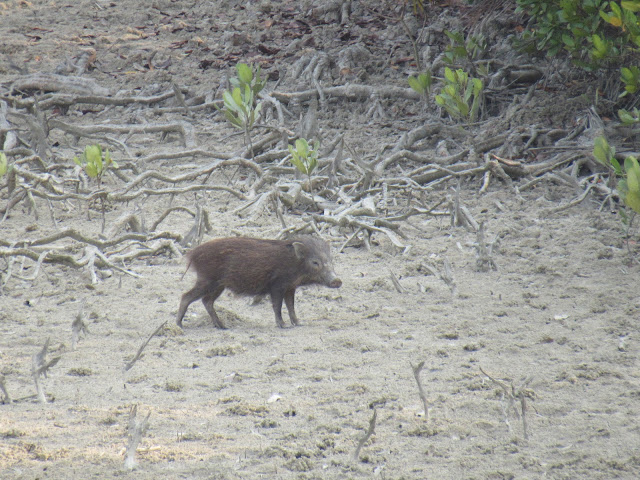 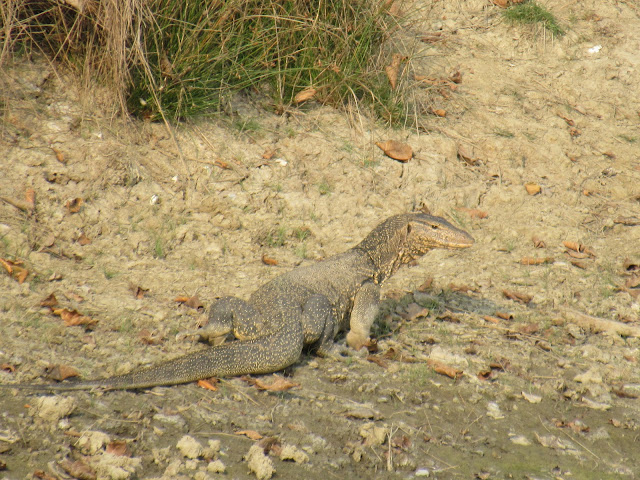 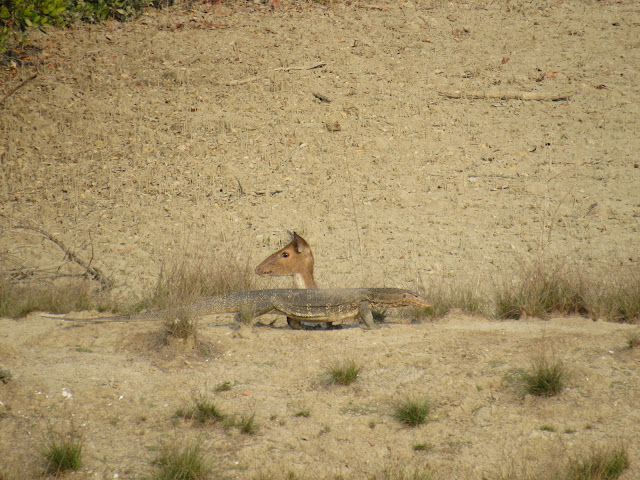 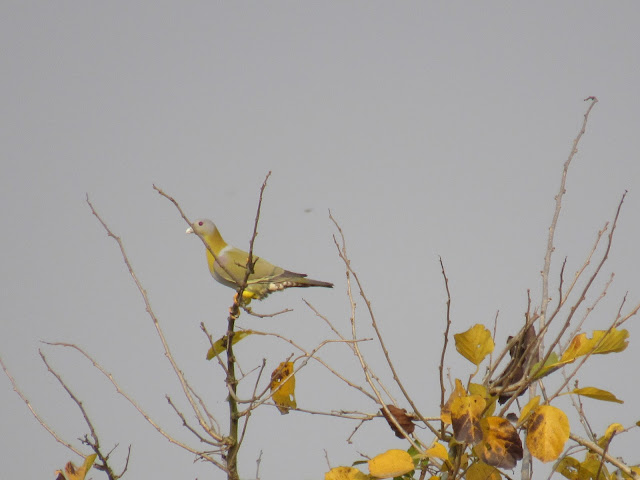 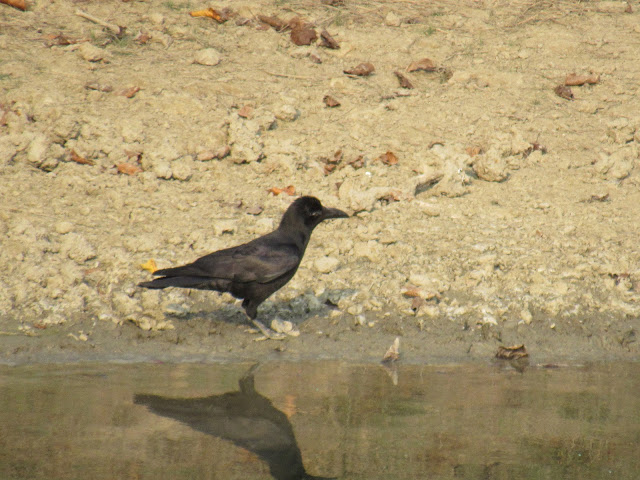 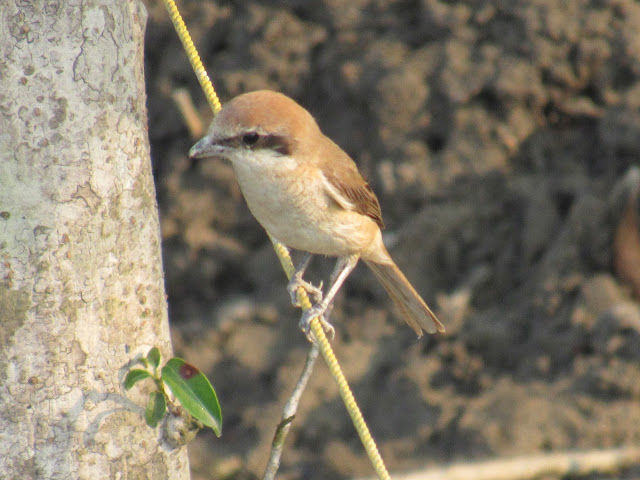 With the local tourist creating so much noise - it is impossible to see something more exciting.

All of our group members left for Kolkata at around 4 pm and we left for our resort by another boat. We could have gone for night safari again - but we skipped it today

Today our boat left for Kolkata around 9.30 pm. In the boat we met Biswajit Mistry (helper) and Sareng. We learnt that a helper gets Rs 200 per day and Sareng or launch driver get Rs 7000 per month. Biswajit has a wife and two chilren. His elder son (in class 7)  takes tuition from a local teacher, after school hours, 6 days a week along with other students and pay Rs 400 for the tuition fee. His younger son is in class 2 - he pays only Rs 150 for the tuition for the same number of days ! Biswajit is however is not literate. Every month they required around 25 Kg of rice for the family of four. They eat fish almost everyday. The electricity has come around 1 year back to their village, just after he bought a solar panel for Rs 18,000 from Gosaba (with installation charges included). Normally people here pay electricity charges of around Rs 300. They have a paddy field. They had a harvest of around 30 sacks @ 50 kg per sack this year. They sold around 8-10 sacks. The paddy is sold at around 16 kg , which is then para boiled in rice meal to remove the husk and sold in the market later by mill owner. He told me mid-day meal is not doing more harm, since people eagerly wait for the lunch , instead of concentrating on studies !

He told us that they don't have to take 2 hours boat journey to see a doctor any more. There are good doctors from Kolkata who comes to Gosaba. They go by a combo of auto and boat to reach Gosaba. Things are good these days ! 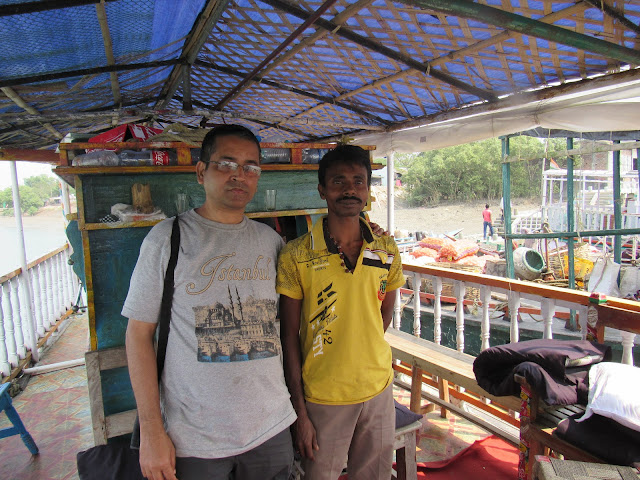 We reached South Kolkata (near Gariahat) at around 3.10 pm.

Thank you for putting all these strategies into a very readable place. It shows your ability and great skills. keep sharing such article in future. Best Ephesus Tours


After a long time, I read a very beautiful and very important article that I enjoyed reading. I have found that this article has many important points, I sincerely thank the admin of this website for sharing it. Best Evinrude for Sale Services Provider

It is really a helpful blog to find some different source to add my knowledge. Guardianship Ireland

Usually, as soon as human beings come to realize that their passport is misplaced or stolen, they begin dropping their nerves of their panic state. Their unawareness concerning what they need to do on such occasions in addition worsens the state of affairs. Thus, it's miles higher to be aware of a way to address such conditions. First of all, don`t panic and live calmly! It is vital to be in the proper body of thought to reflect on consideration on what you need to do next.