First stop Kurumbera fort
near Gaganeshwar village. Kurumbera Fort is only 23 K.M. from Moghalmari.
Kurumbera Fort was built in the year 1438-1469. The establishment of Kurumbera Fort was written in Oriya inscriptions during the rule of Surya Vansi king of Orissa Gajapati Kapilendra Dev. The structures were built during the rule of Aurangazeb.
There is also an inscription made by Mohammed Tahir. Despite being a protected monument, under the ASI, there is no data available about this fort. Folk legends believe that the fort was built in a single night, when Ram, Sita visited the place, during their Vanvas. The fort contains a three domed structure over a platform, along with a sacrificial altar. 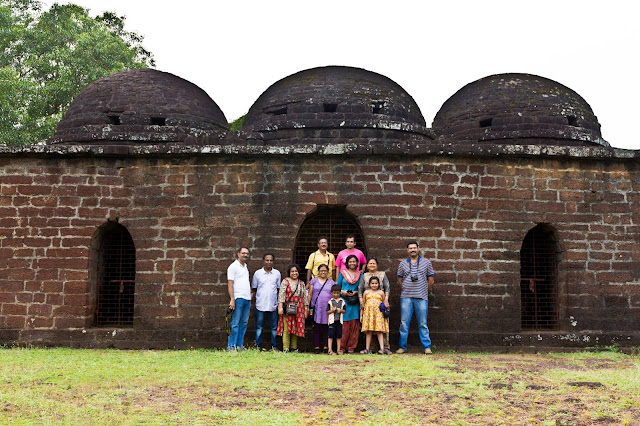 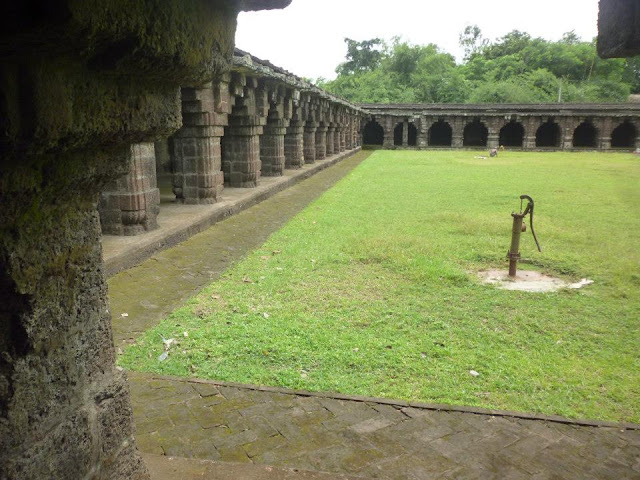 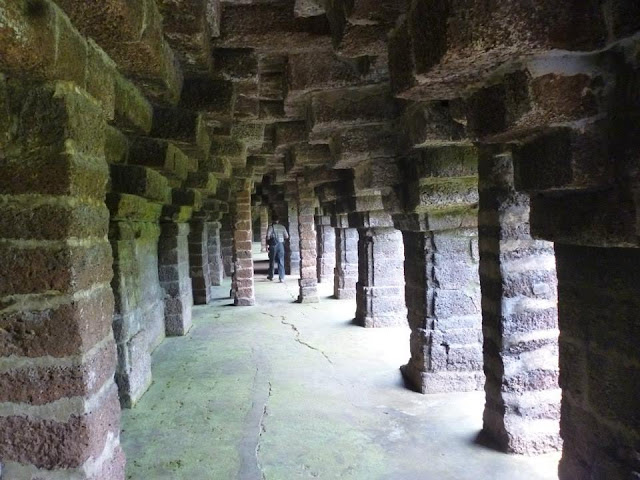 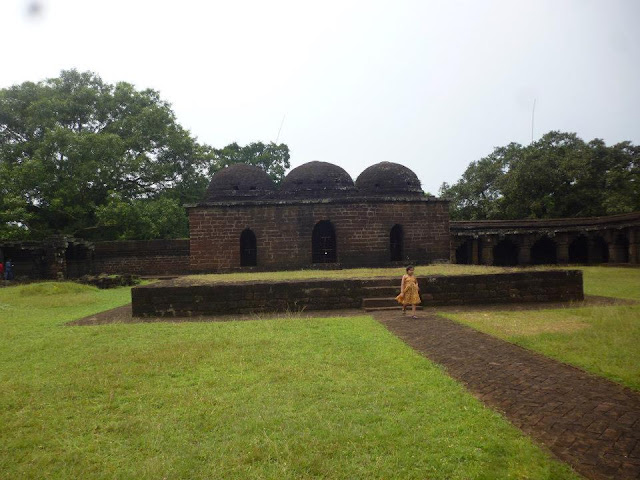 picture credit : Asit Mukhopadhyay
Though the most parts of this fort and its structures are in ruins, ASI has taken considerable effort to protect the structures from collapsing by using cement and lime mortar for holding the external pillars. The pillars hold roofing which is shaped as a flower. The usage of circular pillar to the rear of the left-dome seems interesting. The presence of an inscription stating about its usage is present right behind of the domed structure.
Though the script resembles Oriya, locals state that it is not decipherable.

How to go ?
The best way to visit this place is to hire a car from Kharagpur and take the State Highway-5 road to reach Keshiary. From Keshiary follow the mud road through the villages till Hajipur and move South to reach Gaganeswar enroute Kukai village. Gaganeswar is another 4 kms from Keshiary.
Keshairy is around 27 kms from Kharagpur.
II Sarasanka 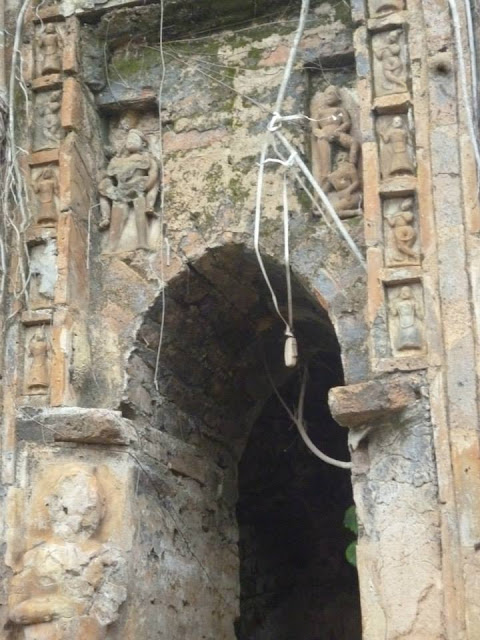 Dantan is the last major stop in West Bengal before Orissa. At Sarasanka we saw the famous lake apparently made by Sasanka. We met Atanunanda Maity, my father's friend and local expert accompanies us in our car. He explained everything to us very nicely. 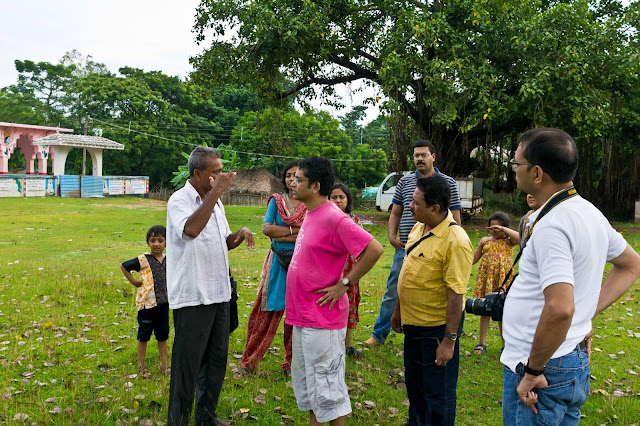 Then we had our lunch.

My father's friend accompanies us to Mogholmari - as a result the museum was opened - since he is well known over there and local expert on Mogholmari. He is from Datan, Jayrampur, West Bengal.
The archaeological remains of Moghalmari represent the most extensive evidence of early medieval culture in the region. It may be pointed out here in this connection that the Chinese pilgrim Hiuen Tsang who visited Bengal in 638 CE immediately after Sasanka's reign, has referred to the existence of Tamralipta (modern Tamluk and adjoining areas) with 10 monasteries and 1,000 monks but It is a great regret that the vestiges of not a single establishment have so far been identified at modern Tamluk.

The present discovery of a monastic complex at Moghalmari is therefore a significant landmark in the history of Bengal and vindicates the pilgrim's observation for the first time.


In fact, the monastic complex at Moghalmari did not grow in isolation. Both literary and archaeological evidences indicate that the site was in the close vicinity of a trade route connecting Tamralipta with other Buddhist monuments beyond the Suvarnarekha--Jayrampur, Basta, Khiching, Baleswar, Pushpagiri (Lalitgiri) of Orissa, as well as Nalanda and Bodhgaya of ancient Magadha.


The prosperity of the Moghalmari monastic complex during the 5th/6th century CE was no doubt a result of its proximity to this trade route. 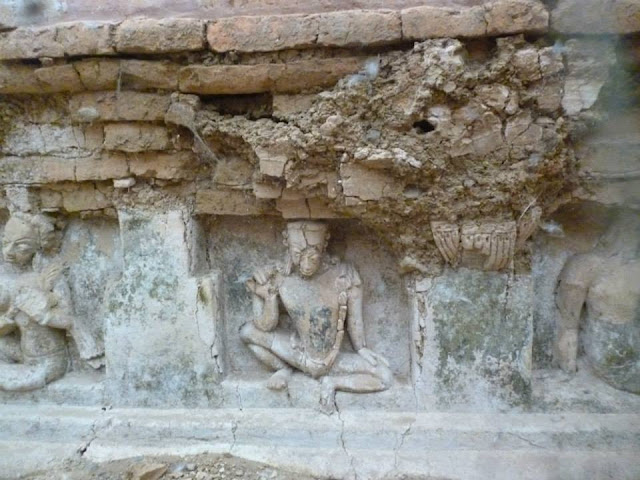 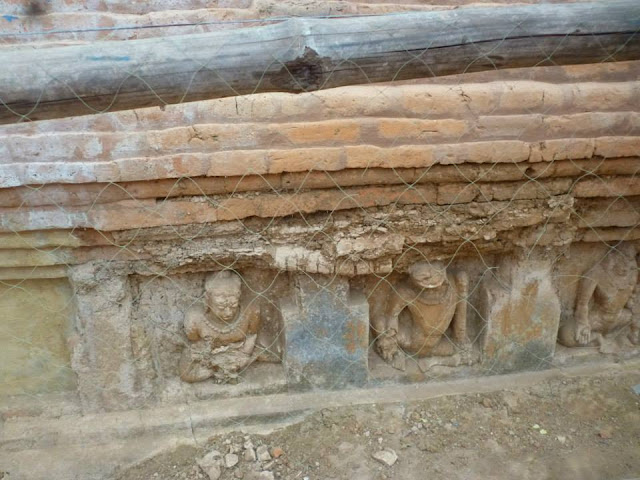 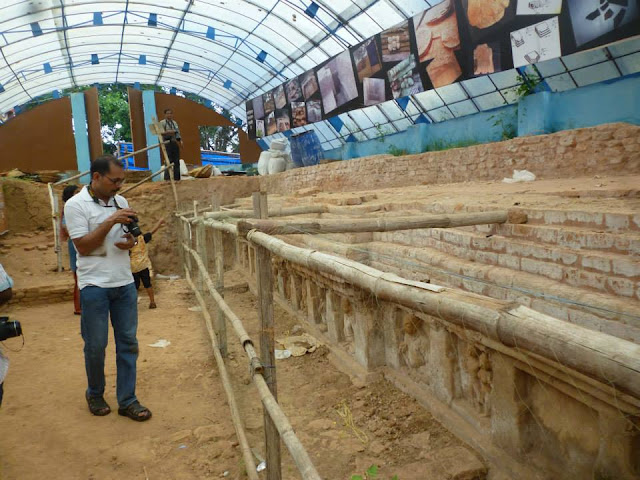 What we saw is quite interesting and we can visualize what it was thousands of years back.

On the way back we saw a local rural market or Haat. 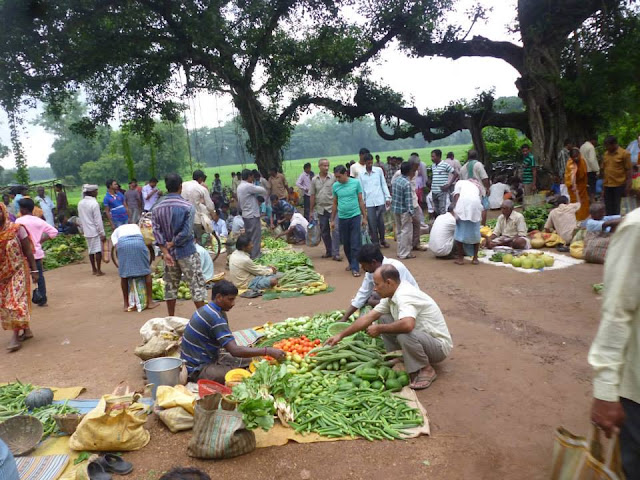 How to go to
Mogholmari  ?

For details and reference point for this article:

Taj Mahal is the most famous heritage monument and included seven wonders of the world if you want to visit taj mahal than Same day Agra Tour by car is the budget tour with lot of adventure. There is a very famous Travel Agency in Delhi India by the name of Ghum India Ghum they have all current and latest information about different destinations.