Bengal’s temple architecture can be classified under three broad heads (according to Ashok Kr Bhattacharya, renowned historian of ancient Indian history and culture — deul /nagara (this type is rare - one is near Bishnupur). The other two types are chala (sloping roof - resembling thatched hut of Bengal) and ratna (tower/ pinnacle) style. Sometimes there is an amalgamation of these two styles to form a single temple. The Durga temple of Bali-Dewanganj is probably the best example of that rare architectural meeting point in Bengal. Ananta Basudeb - Terracotta temple of Bansberia is one such type.

Dodi and I left by early morning train from Howrah - 7 .53 am. It is Howrah Katawa local. There are other trains (one from Sealdah at 8 04 am) too . We got down at Bansberia. 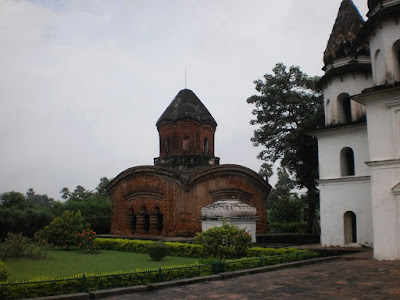 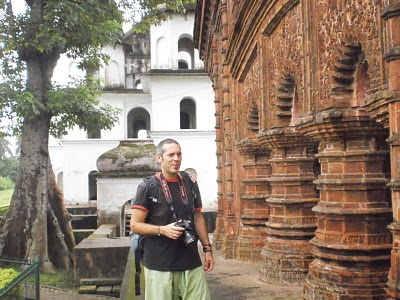 "Bansberia is ideal for spending a Sunday away from home but not too far away. The main attraction in this village are two temples with intricate terracotta works that inspired Rabindranath Tagore. Moved by the art, the poet had asked Nandalal Bose to document the panels on the temple walls ."

Bansberia Station (48km) is 1.05 hours journey along the Howrah-Katawa rail line. It takes around 1.30 mins from Sealdah. We took a rickshaw (Rs 20) from the station to go to the temple complex, which houses 2 unique pieces of temple architecture of Bengal.

"The Hangseshwari temple, looks like Izmailovo Kremlin, Moscow, is the better known of the Bansberia structures, http://www.panoramio.com/photo/50738716 , but the adjoining Ananta Basudeb (terracotta) temple, small and elegant and crowned by an octagonal turret, is no less interesting. 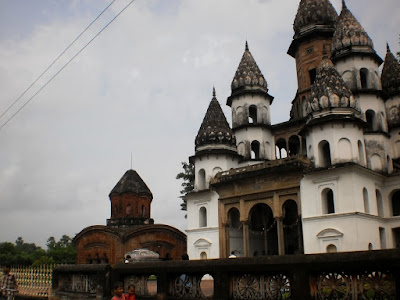 The history of Bansberia dates back to the days of Shah Jahan. In 1656, the Mughal emperor appointed Raghab Dattaroy of Patuli as the zamindar of an area that includes the present-day Bansberia. Legend has it that Raghab’s son Rameshwar cleared a bamboo grove to build a fort, inspiring the name Bansberia. The panels depict gods and goddess, love and war scenes and glimpses of everyday life. 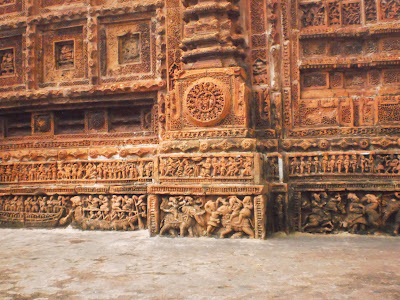 The Ananta Basudeb temple, was constructed by Rameshwar Datta in 1679. Three sides of the one-storeyed temple are decorated with richly carved terracotta panels. The turret also contains terracotta carvings.

The 21-metre high, five-storeyed Hangseshwari temple has 13 domes shaped like lotus buds. The structure has similarities with St Basil’s Cathedral in Moscow, which is also known as the onion dome church. The Hangseshwari temple was constructed in 1814 by the wife of Nrisinghadeb, the grandson of Rameshwar. Nrisinghadeb was a follower of a Tantric cult and had spent his last seven years.

Next to the temple are the remains of the Dattaroy palace. Fragments of arches and broken walls are all that can be seen today."s (1792-99) in Varanasi practising its rites.The temple was constructed after his death by his wife Sankari, as a tribute to him. With its unique shape, it stands out among Bengal temples. An arched gateway leads to its sanctum sanctorum, where an idol of Hangseshwari is placed on a lotus.

After a tour of the temple compound, we went to the main ghat or bank, which is around 5 minutes walking distance. We had our breakfast at a 200 year old shop, just beside the ghat - 5 parota and 2 plates alur-dam and we paid only Rs 20! It was good. Then we took one of the shared auto rickshaws ( there is one every 2-3 minutes) to go to Hooghly Imambara by paying Rs 9 each for the 25 minutes journey.( Ranganda told us to go to Bandel from there. The Bandel church was so badly renovated that I thought it is probably a wastage of time to go there.... "Bandel, on the banks of the Hooghly, is best known for its church. Bandel Church is a testament to the engineering skills of the Portuguese. Almost a century after Vasco da Gama reached the west coast of India, the Portuguese started making inroads into Bengal. By 1599, they had settled in and around the present-day Hooghly district and built the church that after being modified several times is now known as the Bandel Church").

The Imambara is the other landmark of Bandel/Chinsurah. One can go to Imambara from either of these two places. 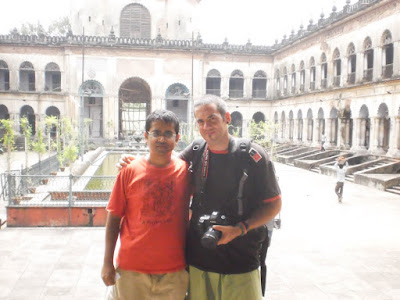 "Imambara literally means the residence of the Imam, but in the local context, the word stands for a house or an assembly hall built by the Shiites for observing the Muharram. The imposing structure was built in the memory of philanthropist Hazi Mohammad Mohsin over 20 years. It was completed in 1861. Designed by architect Keramtulla Khan, the two-storeyed building is surrounded by a courtyard with a fountain and a pool. Two 85 ft-high towers dominate the structure. Each tower has a flight of 152 stairs....A three-storey structure connecting the towers contains a clock on the top floor. The lower floors contain the bells and the clock machinery." There is an entry fee of Rs 5. We went to the top , although the doors are locked , but we could still had a panoramic view of the river including the Jubilee Bridge, the town and the courtyard from there. 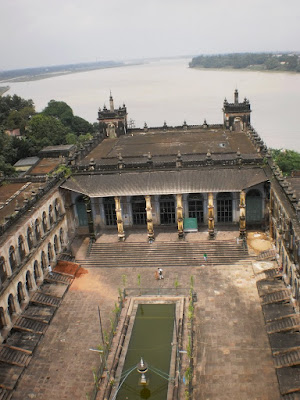 "Unfortunately the Imambara is not being maintained well — the fountain is not working and the water in the pool has turned green. But the clock sounds a gong every quarter of an hour, reminding everyone around of the glorious days of Bandel and Chinsurah or Chu Chura." But I must say the architecture of the Imambara is quite unique and exquisite. It makes me sad that a place like this is hardly visited. You can go to the back side of the Imamabara to see the river Hooghly. In fact you can go to Bandel church by hiring a boat from there.
Then we went to the auto stand, which is 2-3 minutes walking from the Imambara. From there we took an auto ( there is one every 2-3 minutes) to go to Chinsurah or Chu chura (erstwhile Dutch colony) by paying around Rs 5 - It is 5 minutes distance by auto rickshaw. From Chu Chura you can either take a trekker or bus (No. 2) to go to Chandan Nagar, the erstwhile French colony. The bus fare is only Rs 5 and it takes around 25 minutes to reach Chandan Nagar. You have to get down near the church or Museum stand. (Though there is no such stand - you have to tell the conductor that you have to go to the Church). From the bus stand you have to walk for 3-4 minutes to reach the Church. Unfortunately the church was closed at this point of the day ( 2 pm). From the church the museum is only 1 minute walk. Today being Saturday, French Instt Museum, was closed! Timings are 11 - 5.30 pm. It is also closed on Thursday apart from Saturday. I have called them to find out this information. (http://institutedechandernagor.gov.in/News.htm) Institut de Chandernagore, Strand Road, Chandernagore, Hooghly, Pin: 712136, Phone no.: (033) 2683-9661. 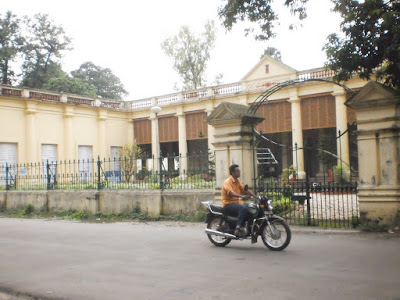 It is just beside the river Hooghly and this part is quite impressive by our (West Bengal) standard and also very clean. You can have leisurely walk along the river side. You can also sit on the bench enjoy the river (seats are clean and still not stolen!). 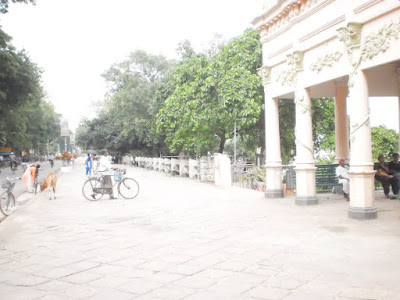 You can also see the college and Court - built in 1868. The building is quite impressive. We had Bhelpuri in front of the Rabindra Bhavan, beside the college. It is quite good (Rs 10 only!). Then we had our lunch at Chandan Nagar little late. A person gave us a lift to the restaurant. Then we went to the station by a cycle rickshaw and paid Rs 25.

The train took us to Bali -which is its last stop (The train which goes straight to Howrah will be the next one, so we decided to go to Bali by availing this train. From Bali the frequency of trains is very high. Almost every 5 minute there is a train) .
Then I suddenly decided to go to Dakshnewar, since it is very near by. I took an auto near the railway station (from Bali Halt : basically on the bridge,near the station) to go to Dakshinewar. We paid Rs 5 for the 10 minutes journey. We went to see the exquisite temple - which is a naba ratna temple or 9 pinnacle temple. Dodi had to write his passport no. and visa no. (???) to enter the temple. While taking the pictures one "gentleman" rebuked Dodi not to take the pictures (??), since it is prohibited inside the temple , rather rudely. Of course we are used to people like this! He was quite upset by his high handedness. The naba-ratna temple is surrounded by small At-chala temples.
We had to skip the boat ride to the other side of the river to see Belur temple, since Belur, unlike Dakshnewar, closes at the sunset and on the top of that there will be no boat after the sunset. Then we took the auto to come back to the Bally station and then took the train to go to Howrah (note: there is a station at Dakshineswar, but it does not go to Howrah). It was one hell of a day to say the least!!


Getting there and away
Tips
For pics click here
Posted by sourabh at 8:05 PM