TETE A TETE WITH Ronald Machado - (friend of Garrincha)


During the world cup 2002 I had the opportunity to watch the world cup with the ambassador of Brazil in India, Ms Vera Berrouin Machado. 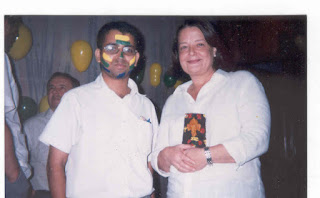 She had invited me to see the matches in the embassy, after I wrote a letter to them. 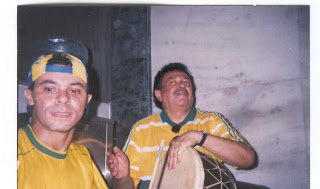 There was real carnival when Brazil won the world cup, right in the embassy, pastires were brought from Oberoi hotels and we learnt Samba dance, while juggling the football .

We got some flag of Brazil, which i preserved even today in 2012. 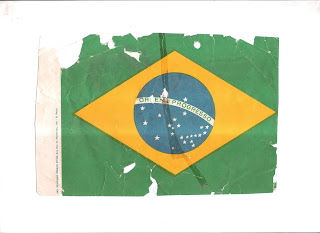 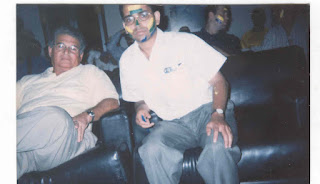 I had the opportunity to meet her husband Ronald Machado and interview this immensely lovable and down to earth person. His father, Alcino Machado, was Director, Finance of Brazil’s one of the most famous clubs Botafogo, the club for which Garrincha used to play. As a result he was a personal friend of Didi (voted the best the best player of 1958 world cup by the press), Garrincha ,one of the greatest right out ever, Pele, Tostao, Leonardo ,Socrates, Zico, Joao Saldanha etc to name a few. He has in fact played with Didi, Garrincha . A civil engineer by profession ,he is an encyclopedia and authority on Brazilian football. He has seen almost all the matches Pele played in Maracana stadium The interview was taken in two days. On the first day he had an appointment in the Cuban embassy at 5 pm. The interview started at 4pm and ultimately (abruptly!!) ended at 7.40 pm, when somebody reminded him that it is very late for the party. He gave me some rare cassettes of Garrincha ! 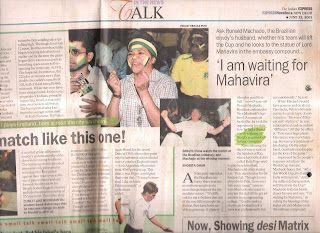 My picture came in Indian Express during the world cup and also the picture of Ronald Machado ! 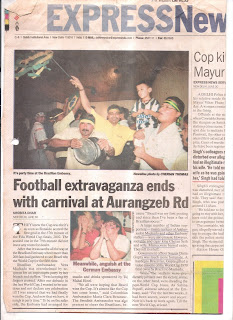 My name also appeared in the Indian Express.


SDG: When did you play for Botafogo?
RM : Till 1960 I have played for Botafogo in the junior team. But I chose civil engineering as my profession after that.
SDG :Tell me about the footballers you have played with?
RM :Garrincha, Didi, Kaka, Vava etc.
SDG :Tell me about your experience with Didi, Garrincha, Pele?
RM :Every Sunday we used to play. Didi, Garrincha used to come there to play with us.
Didi was a very good friend of mine. Didi’s capability to score from free kick was quite exceptional. He used to hit the ball on the valve. There was a Goalkeeper, Pompeia, from America(a team in Brazil).He was very confident. He used to say I don’t need a wall to save goal. Before the match, Didi told me “look Ronald if I get the free kick in front of the goal I am going to score the goal.” As luck would have it he got a free kick in front of the goal. Didi used to hit the ball on the valve. As a result the velocity of the ball used to change .He invented this technique. He applied the same technique while shooting the ball. The ball changed velocity just in front of him, and fell like folha sica ( like dry leaf) and went inside the ball between Pompeia’s two legs.(he was very excited to explain the point. In fact he got up and shown it to me how it went inside) He was so embarrassed.

Garrincha was a very pure guy, very, very simple person. He was never a PR man like Pele He was born in a very poor family in Rio. His father worked in fabrice (factory),built by the English. Garrincha also worked in the factory when he was 15-18.But he was basically paid salary to play for the fabrice football team. The fabrice sponsored the football team . However his alcohol problem was always there, long before he left the game(which many people does not know) .He had a minor problem with his leg ( bow shaped). As a result he used to stand like a crippled person(he got up and shown it to me).So when he was 18, he first went to the Vasco Da Gama club , for the trial, coach did not allow him to play even in the trial match!!!!!!. When the coach saw him he said “you are out”.