Next day, I went to the 'Complex' or RTC by a bus to take the road tour to Araku. We followed the same route (of Kailash Giri hill) and at 8.15am and stopped for breakfast (free) at one of APTDC guest houses. My guess was that 60% of the tourists in the bus were Bengali and the guide knew a bit of Bengali too!! He is one the funniest guides I have ever seen! 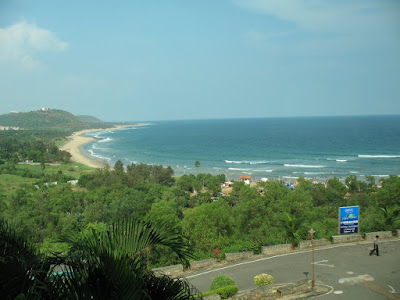 A visit to Visakhapatnam would be definitely incomplete, without the Borra caves and Araku Valley - both lie around 90 kms North 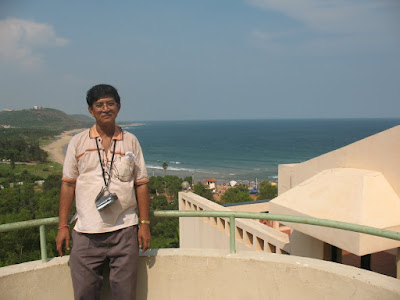 West of Visakhapatnam, high in the Eastern Ghats. These places are specially known for their diverse flora and fauna, which comes alive during monsoons, when Nature is at its best. Araku is also famous for the coffee plantations and numerous waterfalls like Chapari and Katika which come alive during the monsoons. The coffee plantations at the Ananthagiri hills and the thick forests are added attractions for the visitors.

On the way to Araku, our bus stopped once at Ananthagiri coffee plantation and another time for a near 180 degree view of the mountain and valley. I bought some boiled corn. They were selling some chicken shikh kabab (stick) for Rs 10 each only! I resisted the temptation.

Tribal people inhabit Araku Valley. The attractive tourist destination spots include a glimpse of the tribal traditions in the Eastern Ghats. On the way to Araku, I could see the tribals with their distinctive features and nose rings selling fruits and vegetables. We visited the tribal Museum. Araku Tribal Museum showcases the handicraft items that are available for sale, a big attraction for the visitors.

We had our lunch (free) in a nearby APTDC guest house. Then we went to see the tribal dance inside the APTDC guest house complex. It is exactly similar to what we see in West Bengal – Jhargram and other places (or in Satyajit Ray’s famous movie Agantuk). There is an archery range too. Araku Valley just has a nice environment, there isn’t much to do.

On the way back, we stopped at the Borra Caves, which was a lot better than what I had expected. It is pretty massive and a major tourist attraction. Borra caves were discovered back in 1807. They are limestone caves in the Ananthagiri hills of Araku Valley, with an average elevation of 900 m. The caves are about 150 million years old (100m wide and 75m high). This offers splendid views of ‘Stalactites’ and ‘Stalagmites’ inside them.

Deep inside the cave, is also ‘kept’ a lingam of Lord Shiva, on one of the topmost shelves of the cave. There is a point inside it, 130 ft above which passes the rail tracks of Kottavalasa-Kirandul Railway line. The caves are well lit up; but they are quite damp and full of bats and their excreta.

Araku valley is roughly 27 kilometers further North of Borra caves, along the Orissa-Andhra Pradesh border. The average elevation, varies between 600 - 900 m, with highest spots crossing the 1000m mark, (e.g. Shimli-guda). It is on the Kotta-valasa Kirandul line, which is the highest Broad Gauge line in the world at 996 m.
The caves are open to visitors from 10 am to 5:30 pm and there are nominal charges for entrance and photography/videography.

I went to the bottom most part of the cave and when I came back to the top, it was already dark. Soon our bus started its journey towards Vizag and I was dropped at NAD Kotha Road at 8.50 pm (to take my bus to Vijayawada) from where I had to catch a flight (due to Puja rush I had to take this route). I had my dinner there.Again Hyderabadi Biryani.

Our bus had a problem on the way and we waited for half an hour. Then I took a government bus to reach Vijayawada at around 6.15 am. I used the opportunity to go to Amaravathi – which is around 27 km from Vijayawada. Vijayawada is considered the cultural capital of Andhra Pradesh. Like Vizag, here too, I saw people all around with lungi– which we are accustomed to in South India. I had my breakfast at the bus depot (Nehru Bus stand) and kept my luggage in the cloak room for Rs 20. Then I left for Amaravathi by bus. It took more than an hour to reach there. Unfortunately, nothing much is left here except ruins. For the first time, I felt somewhat misguided by LP. I visited a nearby museum (opens at 9 am)– and it was worth it.

Amaravathi (Telugu:అమరావతి) is a small town situated on the banks of the River Krishna in the Guntur District of Andhra Pradesh. Amaravathi, known as Dhanya-kataka /Dharani-kota was the site of a great Buddhist Stupa built in pre-Mauryan times. It was also the capital of Satavahanas, the first great Andhra kings who ruled from the 2nd century BCE to the 3rd century CE, after the downfall of the Maurya empire.

After spending an hour at Amaravathi, I decided to come back to Vijayawada. From Nehru Bus stand, I took a bus to go to the airport which was an hour’s journey.

Indeed araku valley is an awesome city. You can get more details here http://www.visakhatourism.com/vizag/vt.php?p=complete_Araku_Valley_Tour_Vizag

sweta singh said...
This comment has been removed by a blog administrator.
Tuesday, February 25, 2020