From Siliguri (New Jalpaiguri station) we hired a Tata Sumo (which was already arranged by Tukuda) and took Sevoke Road which goes towards Kalimpong.

In Siliguri there are two main roads - Hill Cart Road(NH 55) which goes upto to Darjeeling ( 3.5 hours by jeep) and the other road is Sevoke Road(NH 31 and NH 31A) which goes upto Kalimpong (2 hours by jeep) . After 30-40 minutes you will reach Coronation bridge. You have to cross the bridge to go towards Dooars. This road (NH 31C) will take you to extreme East of West Bengal: Chakchaka.

First major town is Odlabari via Bagrakot(Tukuda used to work in Odlabari division of State electricity Board). Then you reach Chalsa via Damdim,Malbazar. If you consider extreme Northern Part of Bengal, it looks like a face of a camel looking East ward , the NH 31C which starts from Chalsa, passes through the nostril of the camel. From Chalsa, a road goes southward (NH 31 ) and after Southward movement it again starts moving towards East , somewhat parallel to NH 31C and passes through the mouth of the camel! Basically NH 31C passes through Jalpaiguri and NH31 passes through Coochbehar.

There is a beautiful Sinclairs Resort in Chalsa. In North Bengal, 2-3 day conferences are often held at this Reosrt. In 2005, I went to the resort to explore the area. It is located on a (small) hill top. From Chalsa More you have to go right, Southwards (NH 31) to reach Murti Banani Forest Reosrt (tariff Rs 800 to 1400) , which is just beside Murti River. The location of the bunglow is very good indeed. However number of private bungalows have also come up around the river Murti. We spent some time at the river .Mohua was as usual busy with picking up pebbles beside the river.

Forest deptt bunglow beside Murti river
After taking our lunch we went to Khunia jungle which is North of Murti/NH 31,we went to the watch tower of Khunia and saw elephants. 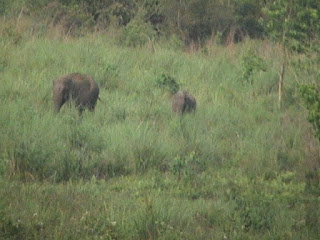 The meaning of Khunia is "killer". The elephants of this region regularly kills people and thus it got this name. It is one of the oldest sanctuaries in Bengal. 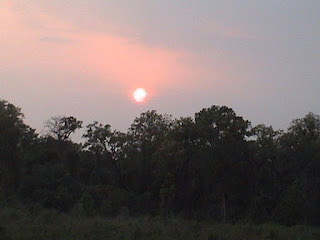 We saw a beautiful sunset there.
Then we went back to our resort. They organize Tribal dance in the evening. Tukuda tried his skill with Dhol with the Tribals. In the evening we had nice chat session (adda) in our resort and we got to know each other better. Palashda, a doctor, is working for Aids Prevention society and knows this place quite well.

Next day early morning (5 a.m.) we left for Gorumara Reserve Forest(on NH 31) further South of Murti . Early morning is the time to enter Gorumara Reserve forest and ticket counter opens at around 5.30 a.m. We were the first to enter the forest. There is a forest deptt bungalow inside, but it is very difficulut to get the booking. However there are number of Hotels outside Gorumara. The only way you can go inside the forest is by taking a car. You have to see the animals from a balcony which is quite far. The video rates are quite high. You can hardly see the animals from such a long distance. The guide shown us the rhinos , but I could not see it properly , since the animlas are quite far the watch tower or balcony. While entering the Park we saw some bison with their distinct while legs. When we went there , there is no elephant safari in the forest , like Jaldapara. I have been told now(2009) there is an elephant safari these days. In fact what i found is that it is not a very touist friendly forest. Kanha is in fact regarded as the most tourist friendly forest in India. But anybody who loves nature will obviously love it. But a question reamins is worth so much effort (especailly when you compare with other reserve forests like Kanha).
PS: update 2011 : I have been told there is a "Gachbari" bungalow in Gorumara where you can actually do the elephant ride and is apparently very good! 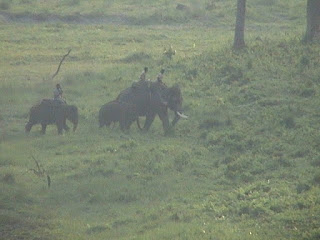 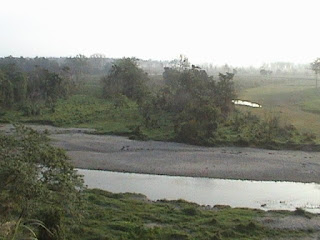 Gorumara Reserve forest from watch tower
Then we came back to the Murti Resort . After lunch we left with our baggage to go to Charamari wilderness camp, where we booked two night. Before leaving for Chapramari (which is North of Gorumara and East of Chalsa More on NH 31C) Anindya joined us from Siliguri. The wilderness camp is on a hill top and isin a quite secluded place. It is quite not a good value for money at Rs 1600 - 1800 per night.

Around 3.30 pm we went to Charamari Reserve Forest and went to the Watch Tower to see the animals. All we could see is bison. The Reserve forest is unimpresssive, although like any forest it has its charm. It is not at all tourist friendly. Just like Gorumara there is forest deptt bungalow beside the watch tower, which is full up most of the times.

In the evening they organize traditional Nepali song and dance at the camp. Lot of people assemble at that place from other resorts. After the nepalese song we had our adda , song , booze and the poetry session.
Next day in the morning we went to Jaldhaka and Bindu. Jaldhaka is a hydel power project. They are at the border of Bhutan. After that we came back to chapramari wilderness camp. In the afternoon we again went to Charamari reserve forest. We again came back and the same routine of nepalese song was followed. 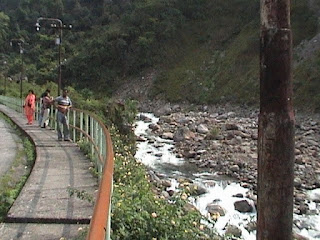 Near Bindu, Jaldhaka -hydel power project
Next day(Monday) in the early morning Anindya, Palashda, Mithu left for Siliguri. After our lunch we left for Rocky Island - for that you have come to Chalsa More(crossing) . From there we went took the route of Samsing via Matelli. While going towards Sunalekhola (meaning of Suntale in Nepali is Orange) a road goes towards Rocky Island. There is no proper road . The road is basically made of boulders! We stayed at Rocky Island Adventure camp - owned by Tukuda's friend Bhajan ( it is given in Outlook travel magazine also; Ph 0353 2641 782, Mobile o9434 012590 ) . We stayed at one of the tents. The place is quite secluded and difficult to get mobile connectivity. You have to cross the bridge to get the connectivity. There is a stream just beside the camp. Tukuda and his friends made merry at the stream! 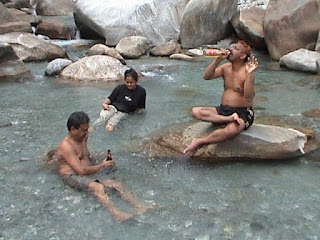 Rocky Island : our group members in great 'spirit'!
Next day we left for Suntalekhola and went to see the WBFD tourist lodge. It is indeed located in a enchanting place. After some point of time the cars are not allowed. We walked all the way to the lodge. Then we started our journey to Siligur. On the way back we stopped our car at Samsing Tea garden. We saw some Gorkha Jana Mukti Morcha flags there. 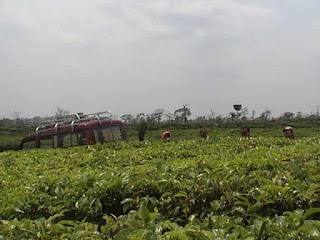 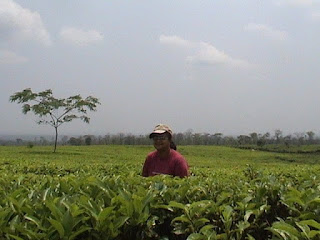 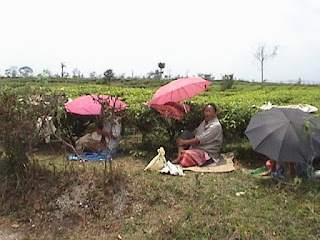 Tea garden workers resting near Samsing on the way to Suntalekhola.
India produces around 950 million Kg of tea, which is 25% of world' production. Again Darjeeling produces around 180 million Kg. It is mostly orthodox variety tea. The premium tea is called Golden flowery orange pekoe;then Golden broken orange pekoe;then fanning and finally dust. The tea prices were down for a very long time. Most of the tea gardens in Dooars (meaning door to Bhutan) are closed or in very bad shape.The workers earn less than $2 / day. There has been cases of suicide among them. Like Darjeeling Dooars tea is itself a brand. The highest price of tea recently has been from the Makaibari Tea estate @ Rs 51,000 per Kg. I have been told by my father's friend , an expert of tea industry, these teas are usually plucked in moon lit night and it needs perfect weather (read mist) to grow something like this.

While coming back we saw some beautiful flowers near Samsing. There are many families who are having a nusery in front of their house. The climate is ideal for nursery. 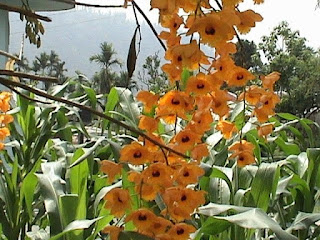 After the enjoying tour we were eager to go back to jungle again! But later I understood that Jaldapara , Chilapata , Jayanti and Buxa in the extreme east of North Bengal is surely a bette option. In other words if I have to choose , definitely this is the better option. I am eager to come back to explore this region in my next visit.
Posted by sourabh at 3:14 PM