We went to Bhalki Machan,Burdwan with the same group with whom we went to Mandar Moni. A long drive away from the city, this getaway on the edge of a deciduous forest, is the perfect spot to laze around for a day or two.
I was busy in my office because of Singur related work (Tata Motors Project). Somehow I manged to come here with the help of my senior colleague (although Our MD forbed me to go there because of urgent work !!)

Take a car via the Durgapur Expressway and take a diversion near Galsi.

Alternatively, take a train from Howrah , preferably the Black Diamond, 6.15 am, and get down at Mankar station. You’ll get buses and other transport to Bhalkimachan.

However we went there by train to Burdwan and from Burwan we hired a Tata Sumo to reach Bhalkimachan.

Within minutes of the car crossing Burdwan, a billboard by the Aushgram panchayat will welcome you to Aranya Sundari Bhalkimachan.

A freshly tarred road across the rice bowl of Bengal leads to Bhalkimachan, believed to be the favourite bear hunting spot of the erstwhile rajas of Burdwan. The ruins of a tower or machan overlook a small waterhole where the unsuspecting animals were shot by the royalty. Perhaps in memory of the bears that lost their lives, the panchayat has erected a concrete model of a Indian sloth bear close to the pond. According to a legend, a tunnel beneath the machan leads straight to a secret passage opening at the Rajbari in Burdwan, about 25km away.

You can stay either at the resort from West Bengal Fisheries development corporation and a resort from Local Panchayat is there. The Bhalki Machan resort maintained by the panchayat (03452-212056) or the State Fisheries Development Corporation resort at Jamunadighi (03452-45300/9474787643.)

We stayed at the Bhalki Machan resort . 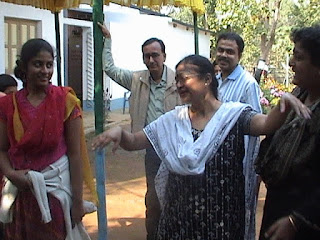 To cater to the picnic crowd the waterhole has been “beautified” by the panchayat and deodars. It has even put a couple of paddle boats in the water body for revellers and built a two-storey resort with 20 beds and a restaurant.

But the real fun lies beyond the confines of the resort amid the deep sal forest . The pristine forest stretches beyond the borders of Birbhum into the Santhal Parganas in Jharkhand. A walk through the woods is very pleasant with sunlight forming patterns on the ground through the foliage. We saw the ruins of a tower or machan, overlooking a small waterhole where the unsuspecting animals were shot by the royalty.

Although the forest used to be infested with bears, now one can find just some wild cats, foxes and monkeys. A few years ago, elephants from the interconnected Dalma forests had strayed into Bhalkimachan.

If you decide to stay overnight, a resort developed by the State Fisheries Development Corporation at Jamunadighi-Amrapali barely 3km from Bhalkimachan, would probably be the best option. The tourist complex is inside a fish seed farm run by the state government. Air-conditioned rooms are available here. The embankments between rows of fish ponds have been converted to mango orchards (or amrapali) with bamboo and concrete benches strewn around. However we did not stay here.

After reaching Bhalki machan before lunch, we had our lunch and had a walk through the woods after lunch which is very pleasant. I even found a dead skin of a snake! In the evening as usual we had a musical soiree.

Next day early in the morning we went for sight seeing by hiring van rickshaws. 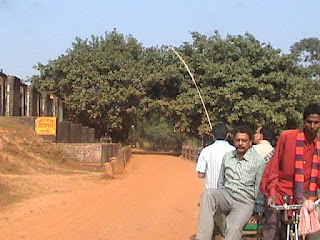 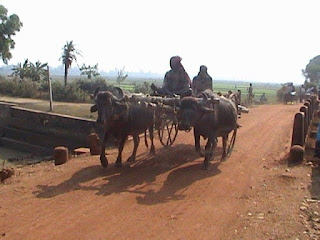 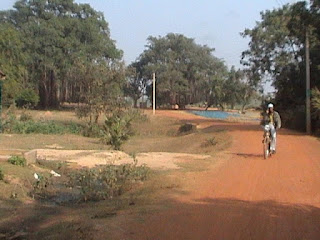 There is a Santal village nearby. We went there and had a talk with them. 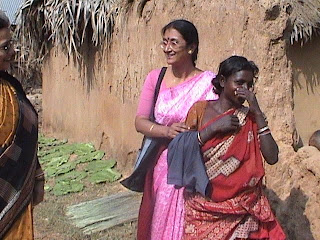 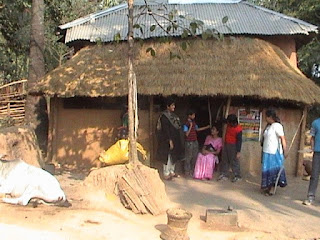 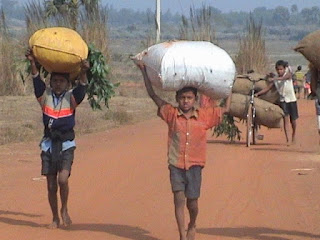 In the evening we arranged some Santal dance in front of the resort. Some of the members of our group joined the frenzy and started dancing 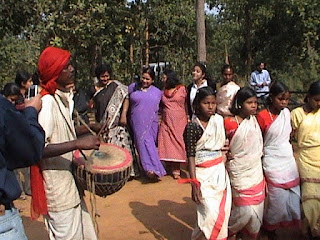 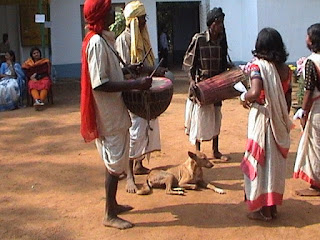 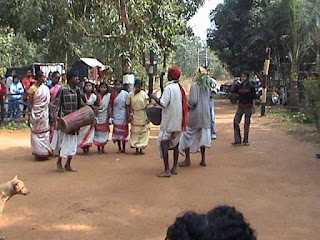 In the evening we started our journey by Tata Sumo and went to Burdwan to catch train, to go back home.

(some of the inputs are from http://www.telegraphindia.com/1100110/jsp/calcutta/story_11965865.jsp )
For more pics please see
https://picasaweb.google.com/bomadg/BhalkimachanBurdwanWestBengalIndia#
Posted by sourabh at 1:48 PM

It appears to bea lovely place. Your writtings and photos are really admirable.