We went to Kenduli Mela (Baul Mela) by a packaged tour organized by WBTDC.

It is held on the auscipicious occasion of birth anniversary of Poet Joydeb.

Here the largest numbers of Bauls, Fakirs come at different akhras(tent) to sing.

We took a train to go to Shantiniketan.From their WBTDC took us to their WBTDC Tourist lodge.

After lunch we went to the Mela site by the car of WBTDC. We stayed there upto 1230 pm. There is hardly anything to eat or drink. The crowd is not controlled and there is no police to control the traffic.I must say it is highly mis organized. It is not recommendable for that reason.
The mela however was very interesting. 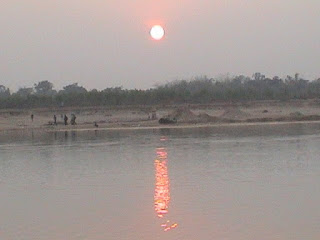 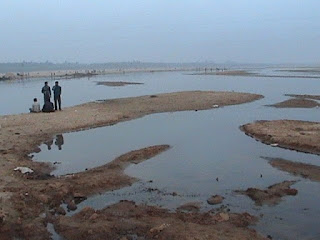 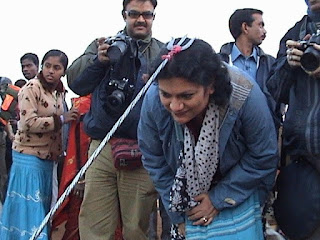 A saint blessing Mohua and also composing a song for her instantly. 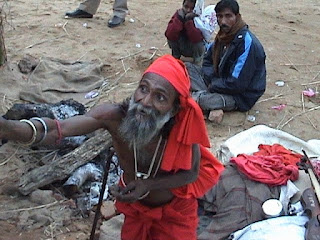 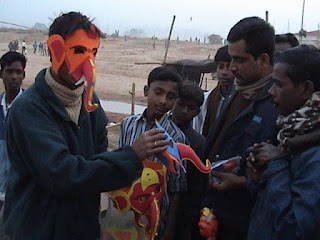 Mask seller in the mela 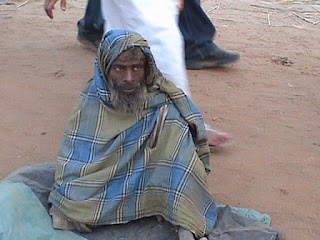 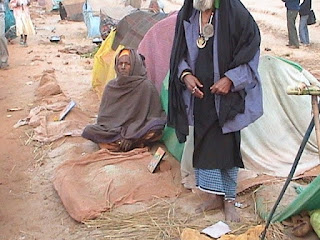 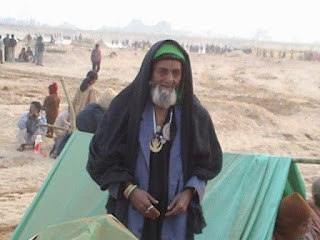 Fakir in the mela 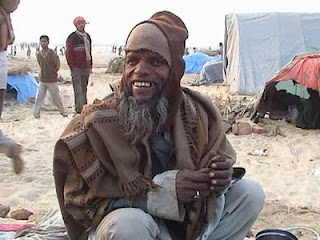 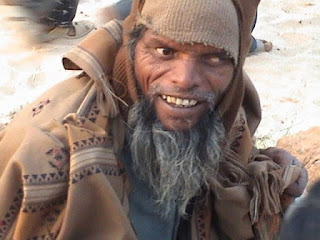 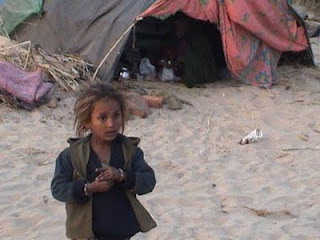 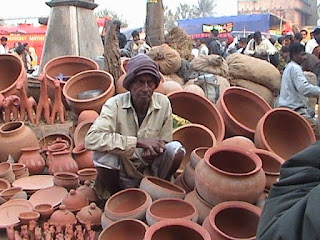 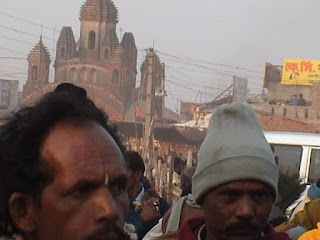 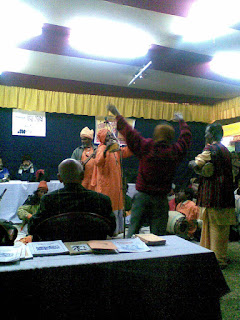 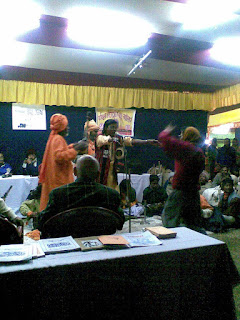 The origin of the word is Baul is debated. Some modern scholars have suggested that it may be derived either from Sanskrit word vatula, which means(divinely inspired) insane or from vyakula, which means impatiently eager and both of these derivations are consistent with the modern sense of the word, where a person can realize his union with the eternal beloved - the Moner Manush (the man of the heart) .So the word " Baul " refers to three terms : betul, vayu and âuliyâ, a term of Arabic origin, which means " saint ", " holy man ".

The origin of Bauls is not known to any great degree of accuracy, but the word Baul has appeared in Bengali texts as old as the 15th century. The word is found in the Chaitanya-bhagavataof Vrindavanadas as well as in the Chaitanya Charitamrita of Krishnadas Kaviraj. Some scholars, however, maintain that it is not clear when the word took its sectarian significance, as opposed to a synonym for the word mad. Bauls are a part of the culture of rural Bengal. Whatever their origin, Baul thought has mixed elements of Tantra, Sufi Islam, Vaishnavism and Buddhism. They are thought to have been influenced by the Hindu tantric sect of the Kartabhajas as well as Tantric Buddhist schools like the Sahajia. The baul were recorded as a major sect as early as mid 18th century.

Bauls can come from a Hindu or a Muslim background ; in both cases, they are usually rebels against orthodox practices and social institutions. The reason of that is purely spiritual : they are continuously searching for Adhar Manush, the " Essential Man ", the inner being which is inside of each human body. Baul music celebrates celestial love, but does this in very earthy terms, as in declarations of love by the Baul for his boshtomi or life mate. With such a liberal interpretation of love, it is only natural that Baul devotional music transcends religion and some of the most famous baul composers, such as Lalon Fakir, have been of Muslim faith. Though research says he was a Hindu when he was born.

Originally, the Bauls were nonconformist, who rejected the traditional social norms to form a distinct sect that upheld music as their religion. "Baul" is also the name given to the genre of folk music developed by this creative cult. It's easy to identify a Baul singer from his uncut, often coiled hair, saffron robe covering their body from the shoulder to below the knees (alkhalla), a turban on their head and a mark on their forehead. necklace of beads made of basil (tulsi) stems, and of course the single-stringed guitar (ektara). The costume of the Bauls is very simple. Fakir Bauls prefer plain white cotton.

See this interesting website to know more about the instruments


Referred to as the Baul Samrat, Purna Das Baul, introduced Baul songs to the West during an eight-month tour of the US in 1965 with stars like Bob Dylan, Joan Baez, Mick Jagger, Tina Turner, et al. Dubbed "India's Bob Dylan" by the New York Times in 1984, Purna Das Baul has played with Bob Marley. Along with sons Krishnendu, Subhendu and Dibyendu, Purna Das Baul is also optimistic about a show with Bob Dylan, the long-time friend of Baul gaan.
Global Bauls!

The famous French Theatre de la Ville invited the global Baul band 'Baul Bishwa' group at its Musiques de Monde (the World Music) meet in . Led by Bapi Das Baul, an eighth generation baul artiste, the group has performed at several places around the world. In this context, the collaborative effort of Paban Das Baul and the British musician Sam Mills ("Real Sugar") to produce Baul fusion music for a global audience is discernable.
One of the best places to stay is in an artist village Aaro akash
http://aaroaakash.blogspot.com/
Aro Akash , Tel: 9830181462
Rent: Cottage Onek Akash costs Rs. 600