After being transferred to Howrah (in West Bengal) office of NSIC in 2002 , I joined my new company(ARDB) in Kolkata in 2003.
I was transferred to Siliguri in 2004. First few months in Siliguri was horrendous .I had breathing problem after staying in a damp house at Hakimpara. In fact I was treated in Kolkata after that incident . Jayashree Ghosh who used to work in my bank helped me a lot during those difficult times.
Later I was shifted to Kashinath Dey's house in Hakimpara.He used to supply stationery to our office. It was much better. I stayed in Roof top. But during rainy season used it used to leak.

There I met Anindya Bagchi , owner of one of the biggest Cyber cafes in Siliguri .We became good friends very first. I gave him the name Monsieur Verdoux for obvious seasons. I saw a very interesting thing in Siliguri , since there is hardly any park in the city (It is an extremely unplanned city with open drains , much like Bijoygarh of Calcutta) , couples go to cyber cafes for meeeting , chatting and making love!!! All the rooms in the cafe were having high walled partition with curtains. Once i went to his cafe for some urgent work. Since all the rooms were busy i was chatting with Subir (Anindya's employee - who looks after the shop) , until one of the couples came out. When I entered the vacant room/kiosk i found there is no net connection. On enquiry i found out (although music was coming out from most of the rooms) there is no net connection for quite some time!!!!
After meeting with me Anindya joined Shriram Finance (where Mohua used to work) and changed his career forever(update: ultimately he sold the cyber cafe in 2008, since with cheap computer and Internet, customers got reduced gradually.). How he got through the interview, how his resume was prepared that was a long story..........
In his cafe i also met his friend, philosopher and guide Tukuda (Pradip Sarkar). One day i went to his house to see a European football match final late at night. Anindya and Tukuda insisted me to shift to Tukuda’s house after seeing the leaking roof. Tukuda stays alone. I finally shifted to Tukuda's house.
The life became very easy after that. Tukuda was a man of very high principle and very courageous. He is a very good poet, Sitarist....... I met Charu Majumdar’s (famous Naxal leader) son Abhi with them. After meeting them, my perception of Siliguri changed remarkably.
A very interesting article on this is http://sourabhdg.blogspot.com/2011/03/remains-of-naxalbari-thu-mar-10-2011.html
We regularly used to have Adda session with lot of intellectuals coming to his house regularly. I stayed in Tukuda's house for 4-5 months,before I got a job in Kolkata. Tukuda is from Banarhat (Dooars) .We once went to Banarhat from Siliguri by inter city train. The train route is one of the finest route I have ever seen in my life.
In Banarhat Mithuda (elder brother) stays with his family. He is a Govt empanelled contractor. We went to Bhutan border and in fact went to Bhutan for few minutes. It is 30 minutes journey from their Banarhat house. Behind Tukuda's house in Banarhat there is Goodricke tea garden, which starts just from his backyards.
Another interesting fact of Banarhat is there is no water in that area due to peculiarity of soil of that area. Waters are to be brought from other places. I have been told when tea industry was booming Banarhat was lively town . Now it seems as though the whole town is under steroid. You can feel people suffering due to lack of opportunities.
We went to some of the friend's houses of Tukuda. One of them is Tapan.They were originally from Kolkata. They came here during booming times of tea industry, like gold rush and had the largest departmental stores in the town. Now it is still there , but it is more of a decrepit store.
My 4-5 months in Siliguri at Tukuda's house was quite memorable.
A typical day in Siliguri would be come back from office . Go to the Bidhan market with Tukuda to buy Royal Stag whiskey and come back. Tukuda will start with his glass of whisky and I will start with my Druk orange squash (only Rs 32 in Siliguri if it is illegally imported from Druk factory, compared to Rs 50 price tag) ,with a punch of whisky in it (very small quantity). Quite often artist Dipankarda (or sometimes his naxal day friend Rupak) will come with his share of booze. In the mean time Anindya will join for FOC (i.e phokot ie free of cost!) booze.Then Tukuda will start reading his poetry or Dipankarda will read one of his poetries. At the end they will fight (ie argue ) with each other and end the day.
On every Thursday Mashtar-moshai used to come to teach him Sitar. Tukuda used to learn Raga Malkauns. Before that he learnt Raga Bhairavi.
Anindya used to call Tukuda Tuku matal.I shortened his name as TM. We refer him as TM among ourselves!! However after coming back from Banarhat I have him a new name BKB or Banar(monkey) King of Banarhat!!! He was a well known name in Banarhat for various reasons.
I also met father’s friend Manas Das Gupta. They were really nice and were like breath of fresh air for me.
Once i went to Mirik on my own . I liked the journey a lot. During 2005 Kali puja we went to Phansidewa for Kali puja organized by WBSEB staffs. Since he was senior Super intendent of WBSEB he had to work even during Puja holidays. Even during pujas he used to catch hold of hookers of electriciyt lines and fined them instantly.
One can refer to Anindya's blog on tourism: http://ethicaltours.blogspot.com/. Anindya and Tukuda know the place very well.

For official purpose i used to go to Darjeeling and Kalimpong regularly.
Once I went to Tindharia (toy trains workshop in the hills) with Anindya's bike. 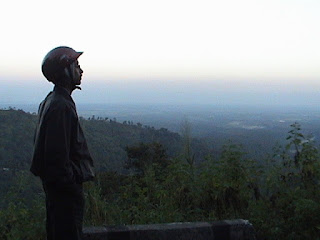 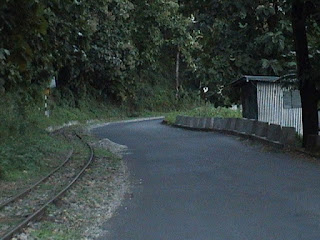 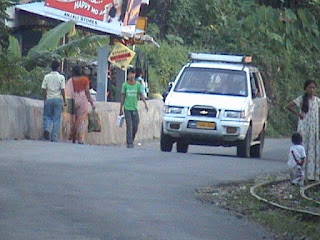