In Bihar’s Jamui district, there is Jhajha block. Simultala is located in Jhajha block with a population of about 10,000. A time away from the hustle and bustle of the busy city life is something that almost all of us long. However, there are not many places left that can offer you a really enchanting time far from the noisy city life. If you want a scarcely populated place free from pollution, spend times walking on dusty roads through forests where you don’t want to be disturbed by any passing vehicle or other people, you can travel to Simultala, a little hamlet in the state of Bihar in India. Influence of Bengali language and culture can be seen from sign boards of streets to dialects of people. The Water of Simultala is very good for your health. Since it is located on the Chota Nagpur Plateau, the place is full of undulating lands and hillocks. The terrain is quite fascinating. 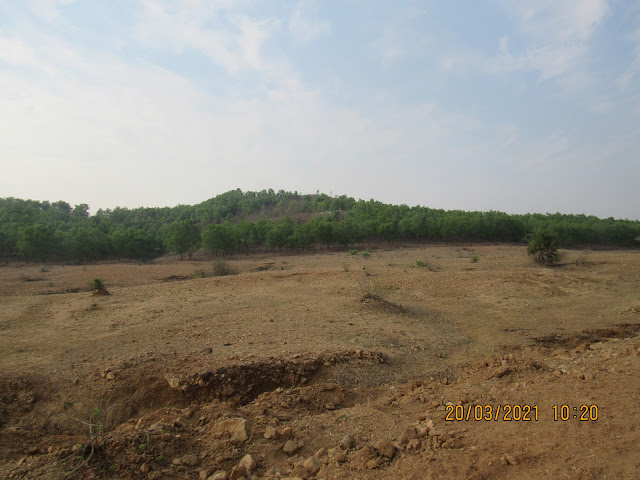 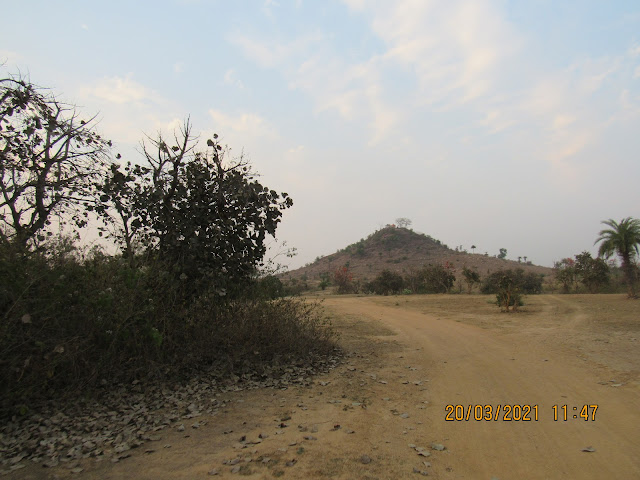 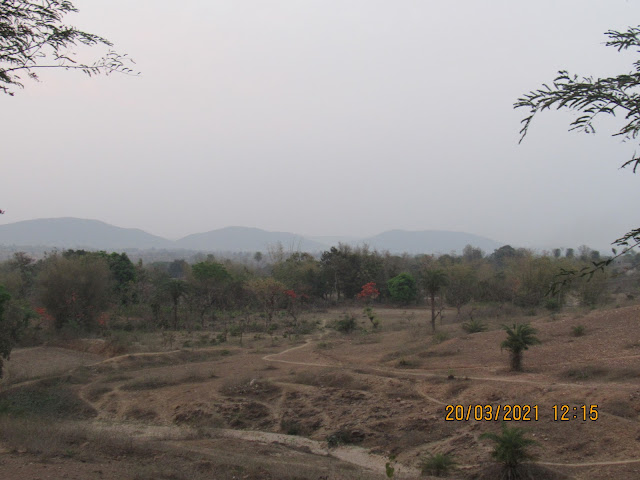 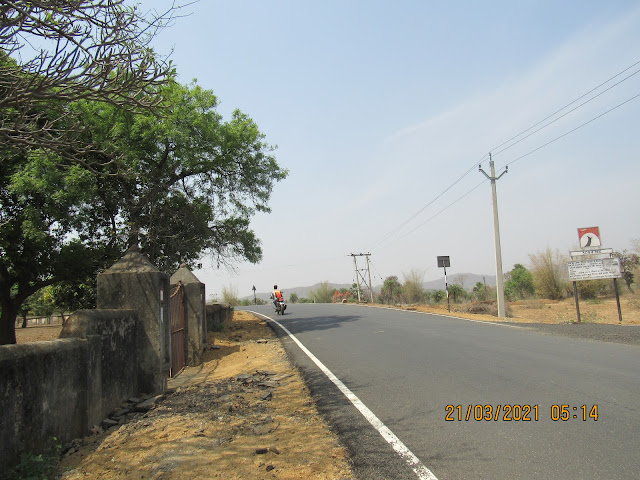 It is said famous stalwarts of past like Rabindranath Tagore, Sarat Chandra, Viceroy of British India, Queen of Dhaka and many more had their villas here. We did not find any house of Tagore or Sarat Chandra, though. A legend of his times, the owner of the film company “New Theaters”, Calcutta, Shri B.N. Sarkar’s bungalow at Simultala is a living testimony of its glorious past. This house comes before you reach the Simultala station.

Simultala is a small station on the Delhi-Patna-Howrah Railway route around 19 kms from Jhajha (by train it takes around 25 minutes and it is better option than Jasidih), 25 kms from Jasidih (To go to Deoghar you have to get down at Jasidih - which is 6 kms from Jasidih). If you are coming from Kolkata first comes Madhupur (in Jharkhand), then Jasidih (Jasidih ) followed by Simultala (Bihar) and Jhajha (Bihar). However the distance between Madhupur and Simultala is quite far - 54 Km. The journey from Patna to Simultala is fascinating - with the beautiful landscape, deep valleys, serpent like roads.

Traveling by train to Simultala is the best way to visit. If you're planning to visit Simultala, you should ideally take a look at the train that stops at the Simultala station. There are different trains from Howrah that can take you to this place. Though many of the trains do not stop at this small station, you can get down at Jhajha (better than Jasidih), which is the next station and take a trekker to come back to Simultala or you can get down at Jasidih and take a trekker to go to Simultala. The auto fare will be quite high, though. But you can also take a local train or any passenger train from Jasidih or Jhajha which stops at Simultala. But the frequency is not very good.

Please note there is no mobile tower of Vodafone. So if you have only Vodafone connection then you will be disconnected from the world. I am told before Jio, it was there, but Jio has apparently removed the Vodafone tower !

But according to me the best option is to take Howrah Mokamah train (03029) which leaves Kolkata at 23.30 hrs and reaches Simultala at a very convenient time of 7.00 hours in the morning. So your half a day is not lost unlike, say Digha or Mandarmani. We took this train only. We bought it through Tatkal, comfortably. Our normal train ticket was under waiting list.

From the Station the Govind Chand Dhur's lodge or Gobido Chand Dhar’s lodge is only 15 minutes pleasant walk. We did not take any auto to reach the lodge. The lodge is around 300 metres from Simultala Police Station (landmark). It is owned by my friend’s batch mate Sujoy Dhar – who shuttles between USA and India at lease 6-8 times a year. The lodge is more than 100 years old and was constructed by his grandfather in the year 1913. 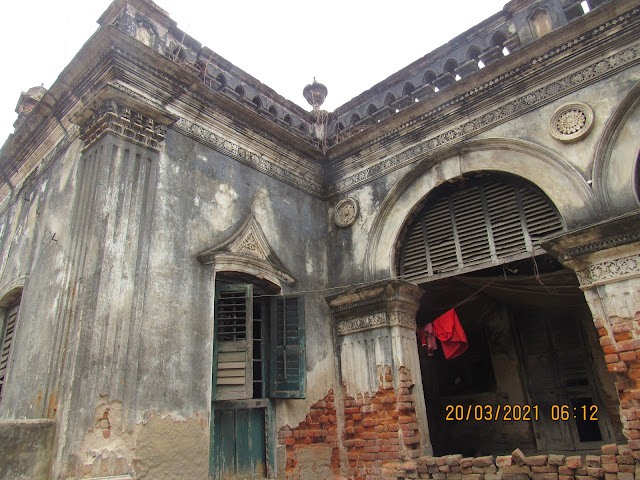 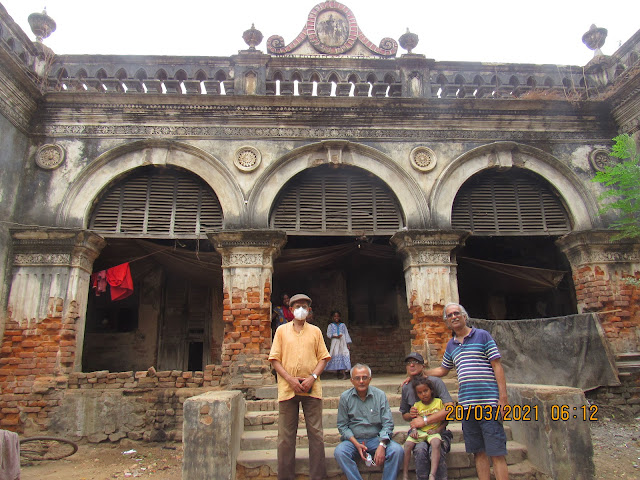 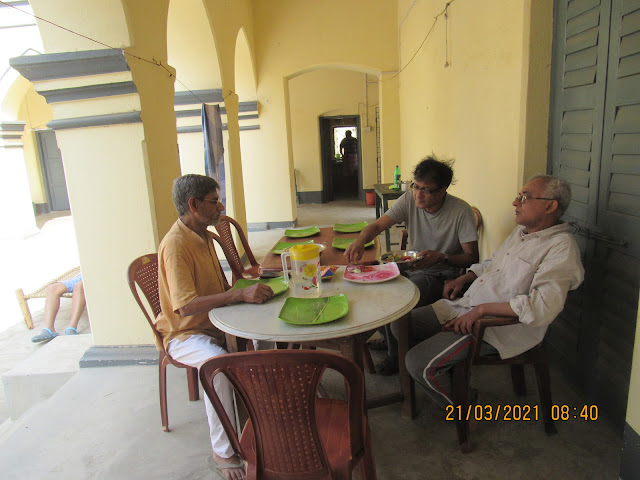 We were joined by Anindya, Sujoy (and two of his office colleagues in his architecture firm – who has come to renovate the house for guests – he wants it to be self sustaining), Sabyasachi – da at the lodge. After reaching our lodge we had our breakfast. Then we went for a short walking tour and saw the house of famous Lord Sinha and some other palaces. It is certainly a village of Grand Palaces. But most of them are in ruins. 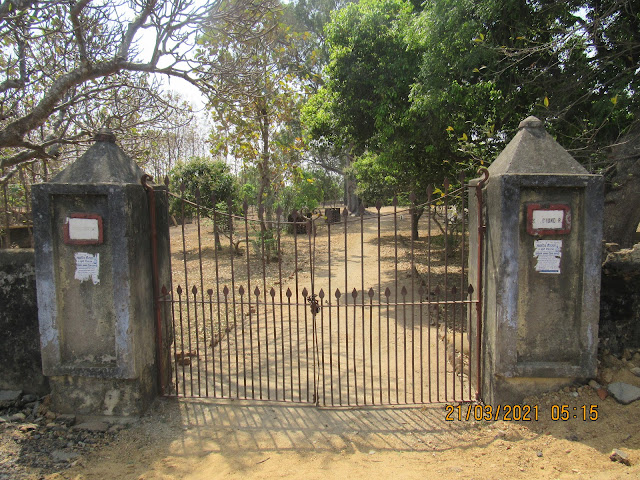 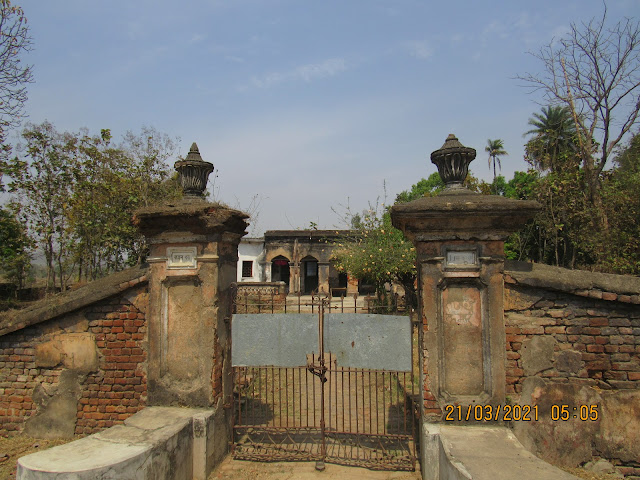 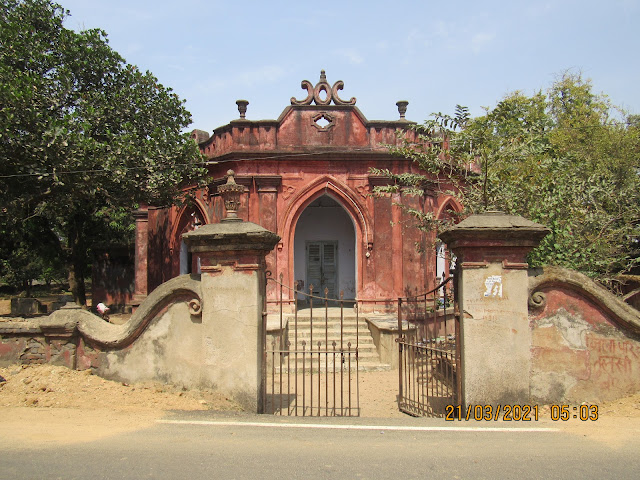 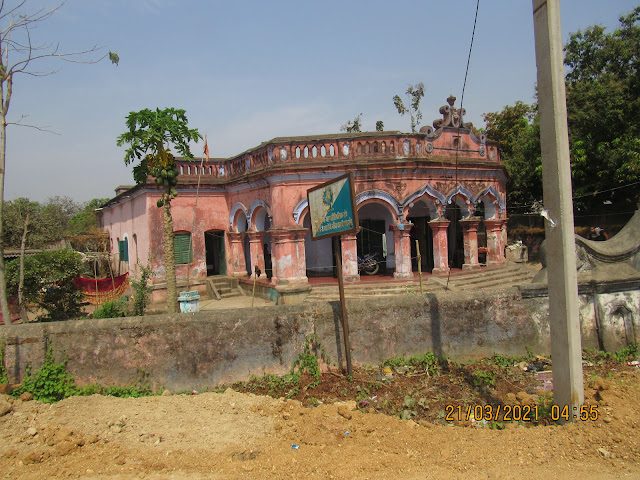 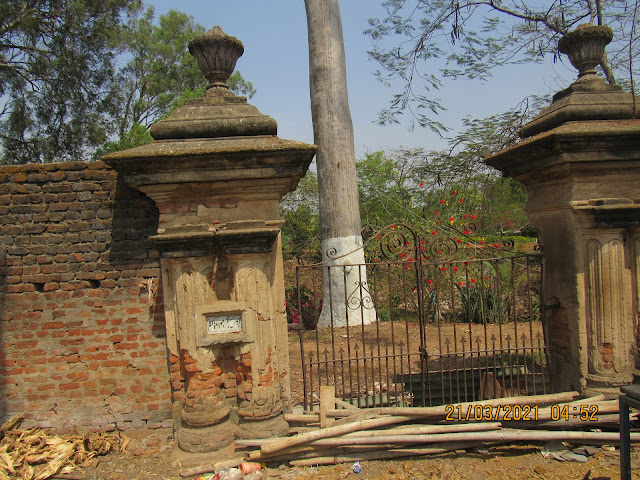 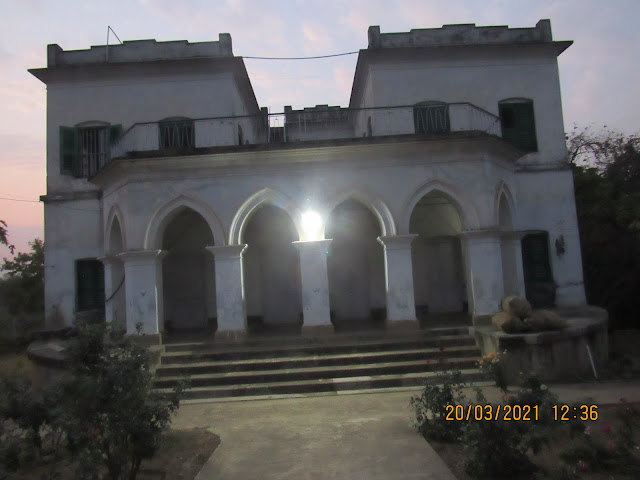 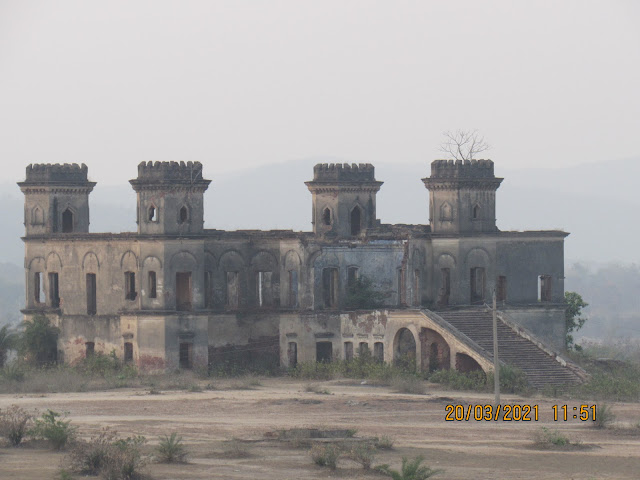 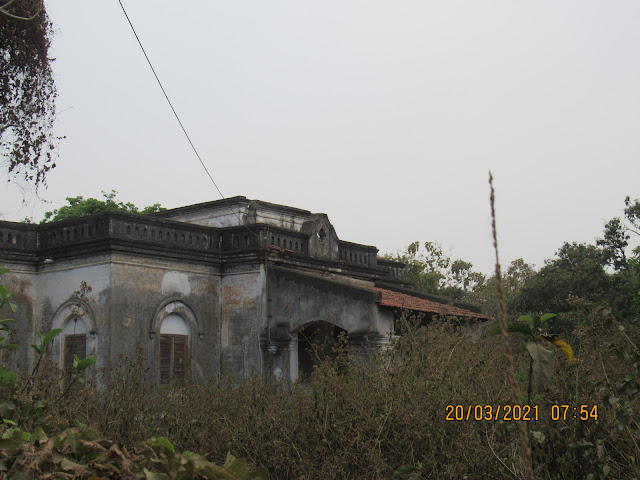 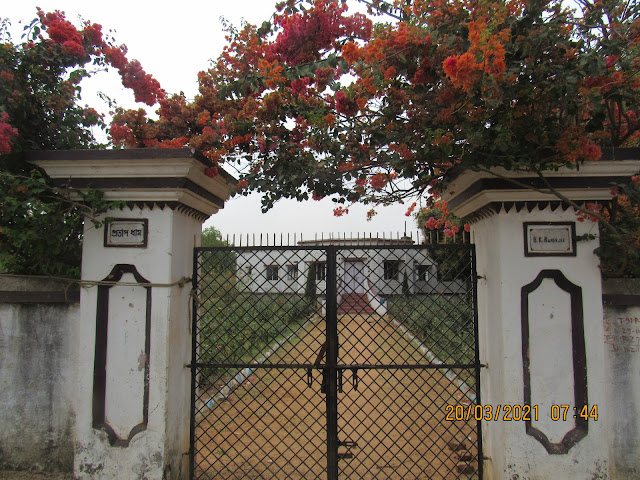 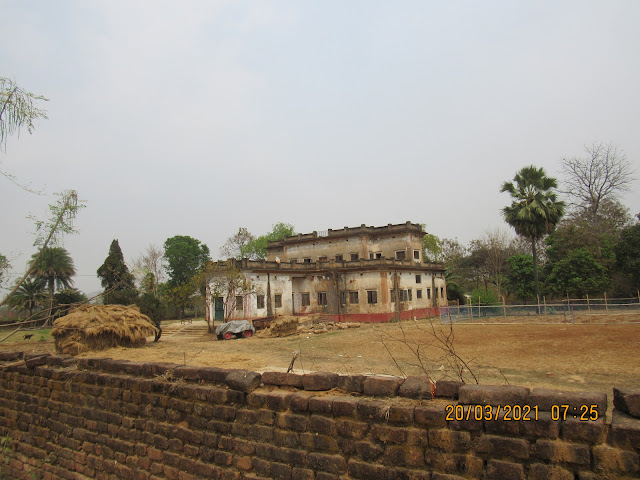 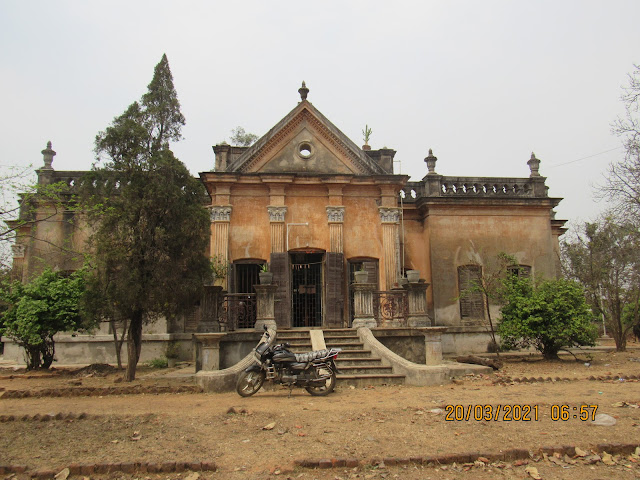 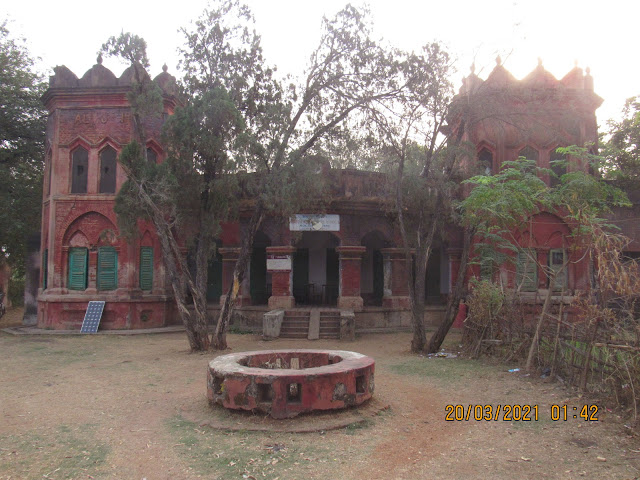 The architecture of most of these villas is very impressive. It is a real pity Government is not doing anything to make it a tourist friendly place. These palaces will tell you how rich the Bengalis were in those days. This was their favourite holiday destination to retrieve their health. Simultala was regarded as one of the most popular health resorts among them, apart from Madhupur. Many of them had even constructed bungalows in Simultala.

We saw The MILT Residential School which is run by an NGO (NRI Bengali) and offers free education to needy children from the locality.

After a short while, we returned back to our lodge to have our lunch.

After lunch we hired a Trekker – where 7 of us were somehow accommodated. First we went to Dharara, which is basically a river basin. 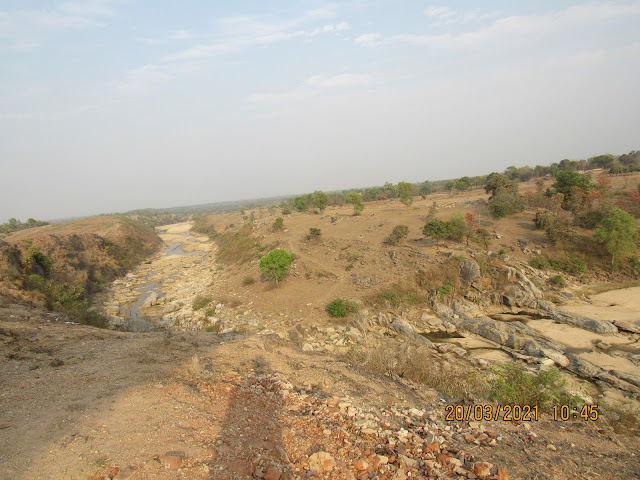 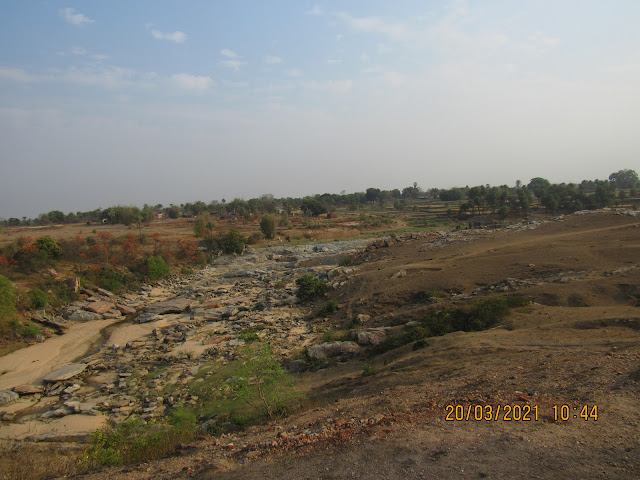 Though it remains dry most parts of the year, if you are visiting the place in the rainy seasons, you are going to get it filled with water. We met a priest over there who had come from Kolkata long time back. 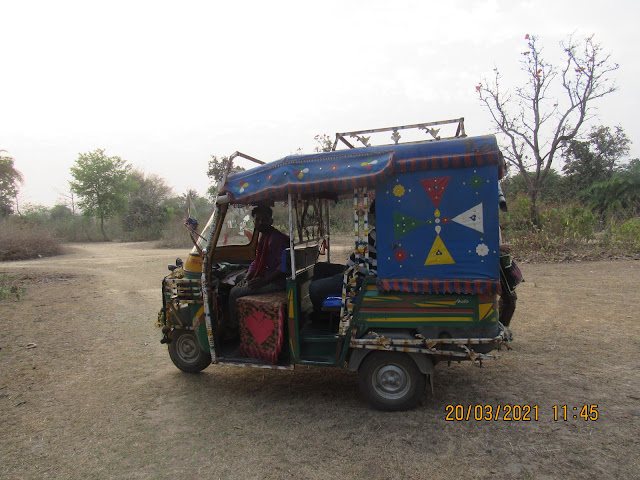 Then we went to Lattu Pahar – which is a popular one. You can go there and climb to the top of Lattu Pahar to get a fascinating view of the village from that height 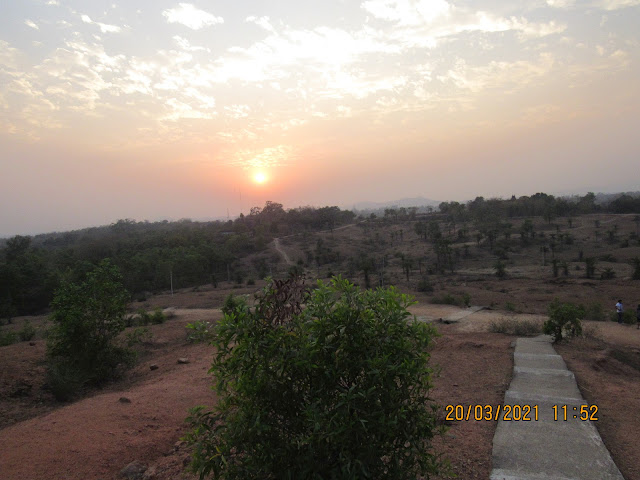 From there you can see queen’s palace (queen of Dhaka) and we stopped at the Queen’s Palace on the way back to our lodge. The Palace is in derelict condition. These are all on the Eastern side of the Railway station/Shimultala.

On the Western side (of Railways line) is  Haldi falls – which is about 6 km away from the rail line. It is believed that the water of the falls have a curative power. You have to walk for some time to reach the falls, even if you take a vehicle. The wilderness of the Leelabaran falls, situated at a distance of 2 km from the railway station, is also worth seeing.

We had an amazing evening session with some snacks (Chicken Pakora). We were enthralled by the duet of Anindya (played Sarod) and Sabyasachi- da (played Sitar). They played Kirwani Raga.

Next day (21.3.21) Tutu-da and I went to see the Western side of Railway Station/ Simultala, by walk. Unfortunately we did not go to see the Haldi falls. This side is equally fascinating and full of derelict houses. We reached in time to our lodge to have our lunch. We saw Madhab Villa where shooting of famous Bengali film "Dadar Kirti" took place. Incidentally it is owned by my friends relative. 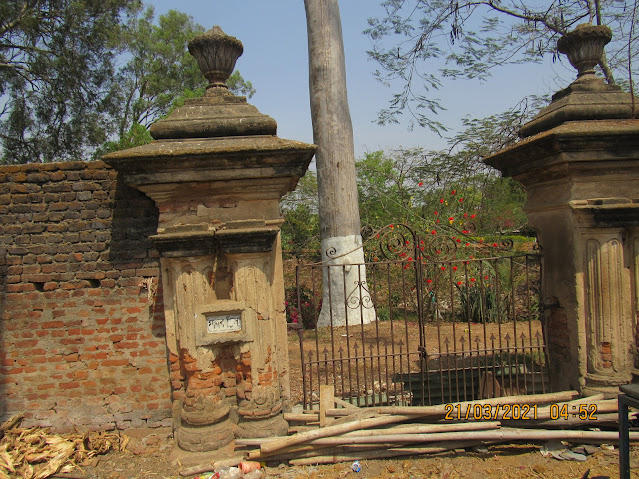 We took our siesta and had evening snacks and finally left for Rail station. Our train does not stop here. So decided to go to Jhajha by a local train and catch our train at 21.35 hours. The train which stopped at Simultala came quite late (more than an hour late and we were almost missing our connecting train from Jhajha). So, to go to     Jhajha either take a trekker or have adequate time in hand. But it is always better to take a train which stops at Simultala station.

Within a few station’s distance is Jasidih, from where you can go to the popular Hindu pilgrimage of Deoghar - where you can take a look at the Baidyanath Temple of Lord Shiva. There are also several temples in the same area. Madhupur is not very far by train.

Many of bungalows are provided on rent now-a-days. If you're looking for a hotel in Simultala you can also stay at Anya Resort Simultala. You can also stay Aprajita lodge or Paul Orchards or Bihari Babu’s Bungalow as per Google map, on the way to Anya Resort from Train station (Right hand side). I did not go to these place. But you can stay at my friend’s lodge, where charges are very reasonable. Contact details of Govind Chand Dhur’s lodge – 98309 12386 and 8777 705181, 98300 30875, 810 00 38844. Small rooms are Rs 700 per day for 2 people. Large rooms are Rs 2200 where 6 people can stay. For extra person Rs 150 per head. You can rent the kitchen also.

You can also see this website for accommodation : http://www.simultala.com/

(some more information about Accommodation)

You could have captioned each of the villas as belonging to whom. The information is, otherwise, very useful and well written.

Another thing - what is the condition of Lord Sinha's Palace?