All you want to know about GDP

what are these income,production and expenditure methods in calulating GDP?how do terms like NNP, NDP, GNP,GDP,NNPFC,NNPMP DIFFER FROM EACH OTHER. what is difference between gdp at constant prices and current prices. its very confusing
I’ll deal with each question in one post. First, lets refresh the concepts again.

Money value of everything you produce within your country.
(Domestic=within country).
Everything means products and services.

The Money value of everything you produce within your country PLUS your income from abroad. Anil Kapoor goes to America, get 5 million dollar$ to play baddie in Mission Impossible 4, but sends that money to India = counted in India’s GNP.

But with same logic, Cricket Coach Gary Kirsten gets 50 lakh rupees from BCCI, and sends it to his family in S.Africa, you’ve to deduct it from India’s GNP. (South Africans will count it in their GNP)

Similarly, Americans will subtract the dollar value of Anil Kapoor’s remittance to India while counting their GNP.

So, what’ll be the (stupid) formula?

How GDP calculated and what is are these income, production and expenditure methods.

GDP is calculated by three methods.

Theoretically all three of them should give same final number, but in reality there will be slight difference between each of them.

#A: EXPENDITURE METHOD OF COUNTING GDP

Here you count the money spent by everyone.
So How to make a ‘technical’ formula?
Ask yourself, where is the money changing hands? There are 5 components of that.

like you and me buying (overpriced) daal, vegetables and milk (courtesy: Sharad Pawar).
I buy your second-hand bike for 15,000 Rupees, should we including it in the consumer Expenditure (C) ?
Nope. Because the bike Is not ‘produced again.
When you had bought that bike for Rs.30000, 10 years ago, we had counted that money in that year’s GDP. So the same second hand-product sale money cannot be counted in this year’s GDP.

Now, I buy your second-hand bike from an auto dealer, (who gets Rs.1,000 Commission) should we include it in the (C)?
Hell Yes, because he sold his ‘service’ to me uniquely. Every time he sells a second hand product, although no new ‘product’ is created but new service is delivered by him.

WHAT IF SAME 1000 RUPEE NOTE IS CHANGING HANDS?
I gave a note of Rs.1,000 to that dealer as part of his brokerage (dalaali) and he gives the same Rs.1000 note to the electricity company for his monthly bill.
Same Rs.1,000 note is changing hands so is our GDP =Rs.1,000 ? Nope. GDP is the money value of everything produced within India. So brokerage service is Rs.1000 separately and the electricity produced is also worth Rs.1000 separately. Therefore, even as same 1000 rupee note is given to both parties.

If electric co gives that 1000 rupee note to its peon as salary, then again it has to be counted. Because peon sold his unique service separately to the company. So in that case
Total GDP =Brokerge+Electric bill+peon^’ salary=Rs.3000

Money we get from export is added.
You remember that GDP means Money value of everything we produce within India. So if we import something, it has to be subtracted, because it is not produced within India.
So formula (for ease In remembering)
GDP = Consumer+Investor+Governer + (eXporter – iMporter)
Technically correct formula:

#B: Income Method of counting GDP

Here you count everyone’s income. But some people may be running business in credit (udhaari), sometimes payments are delayed. So may not give the ‘full picture’ for the given year.

Total money value of everything produced (value added at each stage)
what is total ‘GDP’ here?

Not all of the wheat goes into Baker’s oven. Some of it will go in making beer, some in a normal household for making roti and so on. You’ve to track the value added in each different line.
To be continued… GDP at nominal price, Market price, Factor Cost, etc.etc.etc.

What is the difference between GDP, GNP and PPP?


Gross Domestic Product (GDP)
Gross domestic Product is the money value of all final goods & services produced by residents & non-residents within a country's boarders in a specified time period. GDP comprises of all consumption both private and public, government expenditure, investment and net exports (exports less imports) that transpire within an economy. GDP can be valued with three methods.
Value added method: This is also known as output or Production method. This method measures the value added by each producing enterprise in the domestic territory of a country. Then each producing enterprise is grouped into different sectors and finally the net value added by all sectors is added to derive the national income.
For example, a timber producer may sell wood to a furniture maker worth Rs. 10,000. The furniture maker adds value by converting this wood into an office table and sells it to a furniture retailer for Rs. 20,000. The retailer sells this table to you for Rs. 25,000. If you simply add up the sales turnover of all the three businesses, you will get an inflated picture of Rs.55,000, whereas in fact, it was one table which got finally purchased for Rs. 25,000. The value added method of GDP computation therefore considers only the value added at each stage of business done, in order to compute the total GDP of the country. In this method, the figures that will be considered is Rs.10,000 for the timber seller, Rs.10,000 (20,000 - 10,000) for the furniture manufacturer and Rs.5,000 (25,000 - 20,000) for the retailer.
Income approach: This method is based on the approach of factors of production and is calculated by adding all the income generated by the production of final goods and services. National income is computed by adding up the following :

- wages & salaries of employees,
- interest earned on capital, and other forms of investment income
- profits of entrepreneurs & companies, and
- incomes of self-employed people including farmers 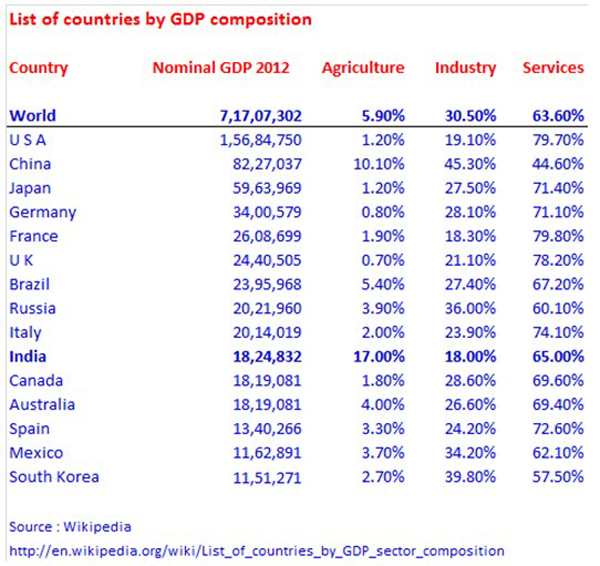 India's much vaunted services sector's contribution to GDP is really pretty much in line with world averages. What comes out as a sharp contrast to all other big countries is the very low level of contribution from industry to our GDP and the consequential higher contribution from agriculture. While much of the last decade went into lauding our service sector's contribution, it seems quite clear that for us to make meaningful and sustained progress from hereon, manufacturing will need to grow far more rapidly and incrementally attract more labour from agriculture into more lucrative jobs.

Email ThisBlogThis!Share to TwitterShare to FacebookShare to Pinterest
Labels: Economics