Song of the soil or soul - Fakirs and bauls of Gorbhanga 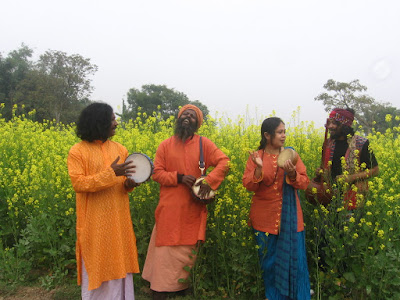 We (Vidyut, Barun and family and we two) left on Jan 15, 2011 (Saturday) for the Fakiri Utsab, which began at Gorbhanga village near Karimpur on Friday afternoon. Our bus left from Menoka cinema.
It took more than 5.5 /6 hours to reach Gorbhanga, not far from the Bangladesh border . 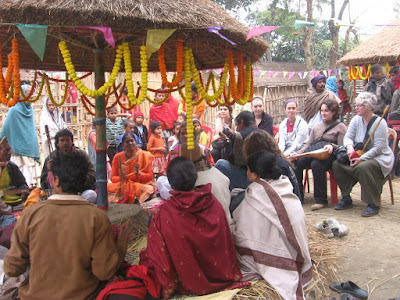 Arati Biswas, Nikhil Biswas
The three day long festival would conclude on Sunday (Jan 16,2011). The unique festival conceived and organized by Banglanatak dot com - would show the famous Baul Fakiri musical magic of rural Bengal during the three day summit. Apart from the Baul songs, Chau dance and Patachitra artisans will also show their talents during the festival.
Baul-Fakiri songs are part of a rich tradition of Bengali folk music carrying influences of the Hindu Bhakti movement and Sufi Islam. These mystic singers sing about humanism and brotherhood. There are about 500 Bauls and Fakirs in Nadia.
Qawwali, which is thought to be the preserve of the northern bit of the subcontinent, once belonged to Bengal too. The difference was that it was sung in Bengali and employed the dhol and khol (percussion) instead of the tabla. Till now, Bangla qawwali was dead. But it is being brought back to life, all because Banglanatak dot com that was trying to market the folk culture of this region.
They sing a song, a hundred years old, that praise both Allah and Krishna. "Juge juge Mohammad Krishna prochar korichhe (for ages Mohammad has spread the word of Krishna)" is a typical line. “We don't care about caste or creed," declares Khaibar Fakir. Bangla qawwali began and ended — and is now resurrected — with them.
Bangla qawwali is believed to have been created by guru Gaus-ul-Azam in Maizbhandari, Bangladesh. The guru was born in 1826 and lived beyond the turn of the century (1906), so this school of Sufi music could be at least 150 years old. It is formally called the Maizbhandari tarika or Quadiri Malamiah Ahmedia Silsila and it shares tunes and the clapping tradition with its northern cousin but is discernibly different too.
"The language is mainly Bangla and local instruments are employed. Bangla
qawwali was traditionally performed in da rgahs, of which there are more than 500 in Nadia alone.

Arman Fakir, 52, is the guru of Fakirs. He carries around a yellowing notebook with songs written in the late 1800s by his dadu guru or guru's guru. The guru's identity is inserted into the song. This line, in a composition titled 'Aaj Mehfil', records the handing of the song from one generation of fakirs to the next: "Chand Madaner Bangla qawwali gaichhey Pagal Guni (Pagal Guni is singing Chand Madan's Bangla qawwali)."

Bengal is known for its Bauls, the mystic minstrels who constitute a tradition of syncretism and are on Unesco's list of "Masterpieces of the Oral and Intangible Heritage of Humanity".

Rabindranath Tagore was influenced by the Bauls.

Fakiri music is similar to Baul but is relatively less known. Baul and fakirs are similar to each other and have been influenced by other devotional music like kirtan and bhatiyali. This had phrases in Arabic and numerous quotations from the Koran and from Hafiz.” The songs written as qawwalis were performed as fakiri. Bangla qawwalis a genre in its own right.
So what explains its disappearance? Perhaps it became too demanding a performance, suggests Banglanatak.com founder Amitava Bhattacharya. "You need lots of artistes for a qawwalis performance.


With declining interest in folk music and musicians quitting

for other means of livelihood, qawwalis became difficult to perform."

Born on the very border between India and Bangladesh, the form probably started to die out some decades after Partition as interaction between musicians became increasingly difficult. The challenge is to ensure that Bangla qawwalis doesn't die a second death. As a means to this end, a resource centre is being built by Banglanatak.com at Gorbhanga. It will store and display old instruments and documents. We need to thank Banglanatak.com profusely for their great job. Time will tell how great a job they are doing. We should let people know - what they are doing and we need to support them by buying the CDs of Fakirs at least.


Banglanatak dot com (www.banglanatak.com) is a social enterprise whose main
objective is to synergize cultural and economic development not only for preservation of cultural heritage and diversity but also facilitating sustainable development of people, who are involved with it. It is trying to address one of the core issues of meaningful engagement - “Art for Livelihood”. This invites a paradigm shift in approach - to a more pragmatic one that considers culture as concrete means for people’s livelihood improvement and empowerment.
A good portion of India’s populations are rural and an important part of them are not formally educated. While rural India is usually seen as supplier of cheap menial laborers, it is seldom realized that it is also a hub of traditional arts and cultures, which are mostly practiced by the marginalized/ lowest sections of the society
This large pool of creative talents needs to be tapped for offering another pathway for the development strategy.

They have all become famous, thanks to the famous movie of Gautam Ghose- “Moner Manush” – based on life of legendary Lalan Fakir – where you can see all of them acting.

Meanwhile, the region's music is being documented and recorded and soon enough, the fakirs will be performing in other parts of the country. The rather spectacular resurgence of folk culture in the area — there are more than 500 singers now — has meant a constant stream of visitors, some of whom are foreigners.

The fakirs are learning to play host. "We put less spice in their food" says Babu Fakir with a laugh. The village welcomed its first African visitor, Nigerian architect Safola Toby, who came to help build the resource centre. Wanderers no more, the fakirs now have the world coming to them.

After we reached Gorbhanga, we were taken to our tents – which are just beside a mustard field. We could not have asked for a better location. 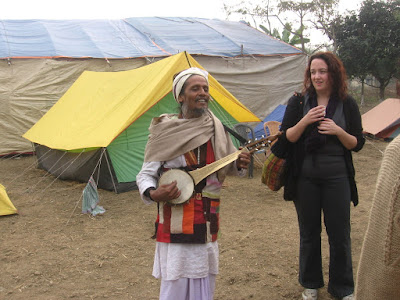 After freshening up, we sat around the akhras to listen to their song.

Lot of foreigners has also come. In one stall they were selling their instruments and in another one some patachitras were also selling. Sidhu , my friend from Banglanatak wishpered in my ear, since you are from Kolkata, you need not buy it from here!

After listening to their music we left for a very nice lunch just beside our tent. The food arranged, as usual by Randal-da was good. Everything was, as usual quite well organized : Mineral water, dustbin (all over the place), eco friendly light shade - they are truly professional and caring too.

In the evening we went to see the Chou dance in a nearby location.

After another round of fakiri song in the evening it was time for dinner. But we were informed by Sidhu after dinner there will be qawwali (it was a secret – since the villagers won’t go and there is no space left for us to sit!!). We went to the resource centre to listen to the qawwali. Vidyut and Barun’s wife however chose to sleep in the tent, since they were tired after the long journey.

The qawwali turned out to be highlight of the festival. At one time everybody was dancing and singing (except Mohua of course – sitting on the chair throughout). It was a mind-blowing experience.

Today there was another round of music. Then around 11 am, the American consulate general Beth Payne and British consulate general – Sanjay Wadhwani came to see the resource centre with huge police contingent. Again some songs were sung in their honour. One of the journalists was interviewing Arman Fakir. He said he knows more than 1000 song. But he is almost illiterate! We also got to know there is another Fakir – Mansur Fakir, who is organizing qawwali at his house and some of the people have actually gone to his house to listen to his song. He is somewhat sidelined among the Fakirs because of various reasons.
In the meantime Mohua went to the house of Babu Fakir and Noor Alam Fakir and met their wife and chatted with them. The whole programme was very well organized and we could see Babu Fakir running all around to make sure that everything is well organized.I thanked Babu fakir for organizing everything so nicely.
We then had our lunch and left for Kolkata by bus.
Some of my favourites are:

££ Some of these can be bought online through internet:

Hello, thanks for your post. Gorbhanga is a delightful and enriching experience. Akkas, Arman, Golam, Nur-alam, Mansur, etc are really great people. I went there in 2012, not during a festival but just for few days after Durga Puja. I think I prefer that. There is a difference to the Baul's performance when he is performing with large groups of outsiders (including foreigners) and when it is just the local villagers. I was lucky enough to spend a few days and nights in the hum drum of the village, where the Bauls are not being made to sing song after song like they are monkeys for entertainment, but when they break out in song for their own pleasure. It was beautiful. There is a youtube account under Soumik Dey I believe where the performances of the Gorbhanga Bauls are captured in that more intimate setting. Few days spent in Gorbhanga with these great souls is enough to infuse a love and patriotism towards the land and people.