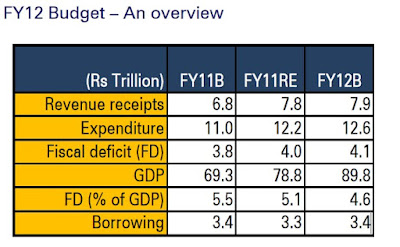 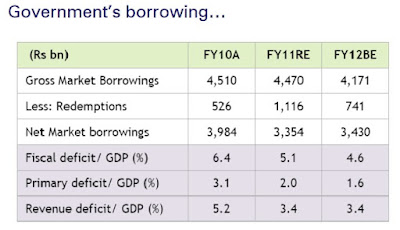 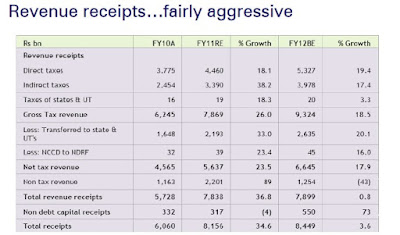 In ordinary English, a budget lays down what you earn and spend. A government budget determines how much money each department gets, with a clear understanding that nothing more will be given save in exceptional circumstances.

Budget discipline for each department is supposed to ensure that the government overall does not overspend, and that spending priorities are not distorted by excessive demands from this department or that. Departments with lowered allocations are supposed to sack consultants and even staff if salaries cannot be financed from their allocations.
In India, however, budgetary allocations have long ceased to be sacrosanct. Cynics say that the Budget is now simply the starting point for finance ministry negotiations with every department for additional funding. Supplementary demands for grants grow year after year.

This year’s Budget sets a new benchmark in allocations that defy credibility. In one area after another, spending in 20011-12 is budgeted to be less or only marginally more than actual spending in 2010-11.

The food subsidy is to remain virtually unchanged at around .60,000 crore, although procurement prices have gone up and carrying costs for the huge government food stock are high. Something as innocent sounding as “other non-Plan expenditure” is to be slashed from .1,45,884 crore to .1,28,859 crore. Pranab Mukherjee claims in his Budget speech that social spending will rise 17%.

Yet the Budget papers show non-Plan expenditure on social services plummeting from Rs. 35,085 crore this year to Rs. 20,862 crore next year. A small part of this may be explained by the reclassification of some revenue spending as capital spending. Yet look at the bottom line, which is total government spending. This is budgeted to rise just a smidgeon from Rs. 12,16,576 crore to Rs. 12,57,729 crore. Is this possible at a time of high inflation and raging political populism?
Optimists like economist Surjit Bhalla interpret the Budget figures as Mukherjee’s determination to get spending under control. Cynics like me will say the spending targets are no more than the start of negotiations with each department on how much more it will get.

Optimists may think Mukherjee is going to be the toughest finance minister in history, wielding a fearsome budgetary axe. Cynics like me see this Budget as simply the preface to the real spending figures that will show up in supplementary demands for grants in autumn.

Having said that, let me add that the recent era of highly elastic Budget estimates has not been a fiscal disaster. On the contrary, Mukherjee was able to say with pride in his Budget speech that the ratio of central government debt-to-GDP for 2011-12 is now estimated at just 44.2 % of GDP, against the Finance Commission’s recommendation of 52.5%.
This looks very impressive at a time when the same ratio looks like crossing 100% in the US and 200% in Japan. We need to add state government debt of around 24% of GDP, but the resultant consolidated government debt of around 69% of GDP does not look unreasonably high.
The credit goes not to budgetary stringency, but to two other factors: revision of GDP data and buoyant revenue. Based on new GDP deflators, it turns out that we have understated GDP for years, which in turn means we have overstated our fiscal problems for years. Besides, revenue buoyancy has consistently surprised us on the upside, and is doing so again this year. Revenues look like rising 25% this year against the budgeted 19%.
Conclusion: populism in India has not wrecked government finances, as widely feared. India does not require a painful fiscal squeeze that would be politically difficult. Fairly modest steps in the direction of fiscal virtue are enough.
The revenue gains of rapid growth have consistently been underestimated by financial analysts. Fiscal prudence is the last thing on the minds of our venal politicians, who are always looking for ways to buy off voters disgusted by political venality. Yet, without intending it, the populist giveaways of politicians have been well within the limits of fiscal prudence.
This is called serendipity. The word is derived from an Arabian tale of Three Princes of Serendip (a mispronunciation of Swarna-dwip or Ceylon), who had the happy ability to constantly make fruitful and productive discoveries without intending to.
Our politicians too have discovered without intending to that they can boast of fiscal virtue even while indulging in farm loan waivers, enormous oil and food subsidies, and other giveaways. Their aim is to buy popularity, not stimulate GDP, but they have achieved both through serendipity.
This may not continue forever. But as of now, India looks in surprisingly decent fiscal shape. This is not because of good governance but in spite of terrible governance. So, even slightly improved governance — like waste reduction by using cash transfers instead of subsidies — can improve fiscal fundamentals faster than venal politicians can erode them.
Posted by sourabh at 6:11 PM

Excellent Blog! I would like to thanks for the efforts you have made in writing this post.
I am hoping the same best work from you in the future as well. This is very beneficial to me.
I’m happy I came across this website. I still learn something new from your posts! It will give
you a great idea about
best yoga teacher training hk