25th December 2009 .
Barun and I left for Baharampore by bus from Esplanade at 6 a.m. The ticket costs around Rs 90 and the journey takes 5 hours.This city is well connected by national highway 34. It is 186 km away from Kolkata . Berhampore located just in the central position of West Bengal and was the first Head Quarter of the East India Company .

In earlier days it was known as Brahmapur because many of the brahmin families settled there in earlier days - from which the city got its name.We have decided to stay at Behrampore since there are not enough rooms left in Murshidabad, we were told, since this is a pick season. But if you get a chance please book the hotel just behind Hazar Duari (beside Bhagirathi river), mentioned in Lonely Planet. Since all the hotels were booked ,we ended up staying at a over priced , dingy hotel in the tourist area of Behrampore (just beside Lake ). I would recommend you not to stay anywhere near bus depot.

After taking our breakfast ,we then headed for Karna-subarna in Murshidabad district. Shashanka, the controversial Bengali monarch who ruled over the kingdom of Gaur from 600 to 638 AD and checked the eastward march of the imperial armies of Gupta king Harshavardhana, had his capital here. Karna-subarna is now home to the ruins of the ancient Buddhist university of Rakta-mrittika. The famous Chinese traveller, Xuanzang (Hsuen Tsang), who toured India in the 7th Century, mentioned this university in his travelogues as an important centre of learning of the Vajrayani Buddhists.

We took an overcrowded Trekker from the stand and headed for Khagra Ghat . Part of our journey was by hanging from the trekker and part of the journey was sitting above the roof of trekker! Behrampore to Karna-subarna by Trekker costs Rs 9.

Raj-bari-danga, also known as Raja Karna’s Palace, was first excavated by archaeologists of Calcutta University in 1962. Their findings consisted of the ruins of a large Buddhist Vihar. Terracotta seals and other artefacts helped identify the ruins as those of Rakta-mrittika Mahavihar. Ruins of Shashanka’s citadel were also excavated.

The ruins were declared a site of national importance. Two other sites had been excavated close to Raj-baridanga. They are Rakshashi (female demon) Dhipi and Nil Kuthi (indigo bungalow) Dhipi. Not much structural evidence has been unearthed at these sites, but both have thrown up interesting artefacts from bygone times. Located within a couple of kilometres of Raj-baridanga, the two sites are considered monuments of national importance.

Although declared a site of national importance, the ruins lie in utter neglect. However they do give you a feel of historical nostalgia.

It would not be an exaggeration, if I say, I was utterly dissapointed by the place - as hardly anything was left to be seen. We did not have the energy to go to Nil Kuthi (indigo bungalow). However the area itself has its own charm. We saw only Rakshashi (female demon) Dhipi and sat for time under the cool banyan tree. 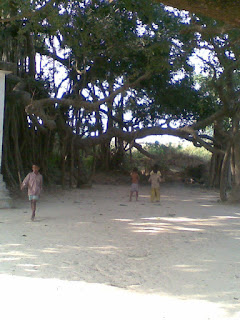 After coming back we had our lunch and decided to go to New and old Old Cossimbazar Palace.

We hired a rickshaw. The entry fee of New Rajbari was Rs 20/- . It is really nice and worth going . 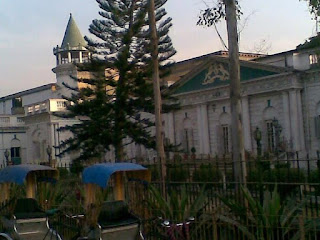 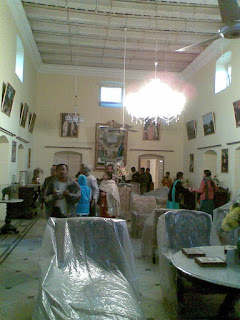 We were not allowed to enter the old Rajbari,though I tried to enter - since people still stay there. 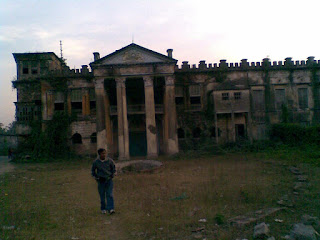 We also saw the Dutch graveyard on the way. 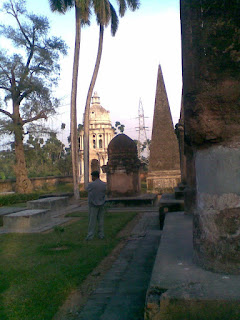 Today being the day of Christmas we went to visit Armenian church at Saidabad- it was already dark and was very crowded! It is the Oldest Armenian Church of the Eastern India , built in 1757 AD.
When we returned it was already evening. After returning back we decided to find some good hotel for us. Then I called Samrat Hotel, mentioned in Lonely Planet. It is 8-10 minutes (by rickshaw) from the main tourist area (near bus depot) of Behrampore. When we called them they said rooms are avaialable at a princely price of Rs 200/- ! It was too good to be true. So we went there to see it in our own eyes! After going there we were quite surprised , it is definentily much much better than the one where we are staying and much cheaper. It is a real value for money proposition. There are good AC rooms too.I strongly recommend this hotel to everybody going to Behrampore. They have a very good restaurnat too! In fact it is near Railway station too. 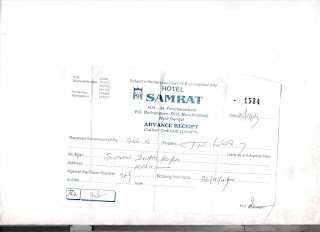 So we returned hotel on that day and told the owner we will be leaving tomorrow morning . We had dinner at a chinese restaruant.
26th December 2009 .
We left our hotel early in the morning and shifted to our new hotel - Samrat . After keeping our luggage in our hotel, we went to the bus stand from where we took a trekker to go to Murshidabad city. The fair was Rs 12, I think. It took half an hour to reach Murshidabad. The Hazarduari Palace, or the palace with a 1000 doors is the chief tourist attraction of Murshidabad. This 3-storey palace was built in 1837 by Duncan McLeod for the Nawab Najim Humaun Jah, descendent of Mir Zafar. It has 1000 doors (among which only 900 are real) and 114 rooms and 8 galleries, built in European(Italian) architectural style. It is now a museum and has an exquisite collection of armoury, splendid paintings, exhaustive portraits of the Nawabs, various works of art including beautiful works of ivory and many other valuables.
Swords used by Shiraj-ud-Daulla and his grandfather, Nawab Alivardi Khan, can be seen here. The other attractions in this floor are Vintage Cars and Fittan Cars used by the Nawabs and their families.
The building is rectangular on plan ( 424 feet Long and 200 feet broad and 80 feet high). The Palace was used for holding the "Durbar" or meetings and other official work of the Nawabs and also as the residence of the high ranking British Officials.
Murshidabad is a city in Murshidabad district of West Bengal state in India. The city of Murshidabad is located on the southern bank of the Bhagirathi, a tributary of the Ganges River. It was the capital of undivided Bengal during the Mughal rule. Nawabs of Bengal used to rule Bengal from this city. It is still inhabited, but has none of the glory it used to have- except for the royal buildings. At that time it was even compared with London.

The city of Murshidabad was the latest capital of Bengal before British era.In 1704 the nawab Murshid Quli Khan changed the seat of government from Dhaka to Maksudabad, which he called after his own name.

The family of Jagat Seth maintained their position as state bankers at Murshidabad from generation to generation. Even after the conquest of Bengal by the British, Murshidabad remained for some time the seat of administration. Warren Hastings removed the supreme civil and criminal courts to Calcutta in 1772, but in 1775 the latter court was brought back to Murshidabad again. In 1790, under Lord Cornwallis, the entire revenue and judicial staffs were fixed at Calcutta.

The town is still the residence of the nawab, who ranks as the first nobleman of the province with the style of Nawab Bbahadur of Murshidabad, instead of Nawab Nazim of Bengal. The city still bears memories of Nawabs with other palaces, mosques, tombs, and gardens, and retains such industries as carving in ivory, gold and silver embroidery, and silk-weaving. An educational institution is named after Nawab family.

The District Of Murshidabad is divided into 2 nearly equal portions by the Bhagirathi, the ancient channel of the Ganges. The tract to the west, known as the Rarh, consists of hard clay and nodular limestone. The general level is high, but interspersed with marshes and seamed by hill torrents. The Bagri or eastern half belongs to alluvial plains of eastern Bengal.

The major industry is that of silk, formerly of much importance, and now revived with government assistance.

Our trekker dropped us near Hazar Duari Palace. 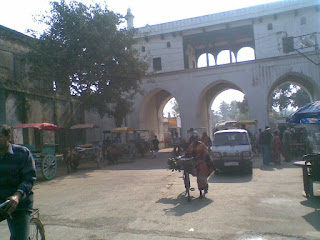 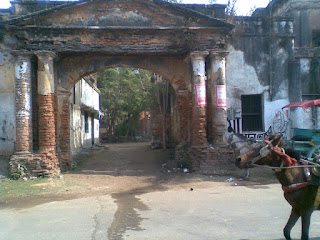 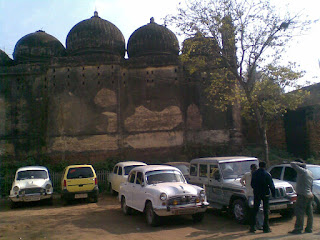 The entry fare is Rs 5 only. It is truly majesitc in nature. There is Imambara inside the Hazarduari Palace complex - built in 1847 AD. by Nawab Nazim Mansoor Ali Khan Feradun Jahat at a cost of more than 6 lacs. 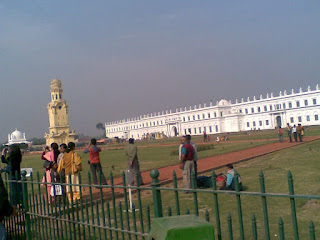 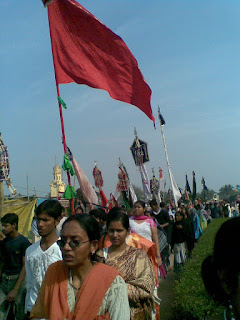 One resident of Behrampore told me he has gone to the Imambara for the first time in his life, since it is closed normally.

Then we started walking along the right hand side of the palace. All the places are along this route except Katra Masjid, which is diagonally opposite a lane off Hazarduari. 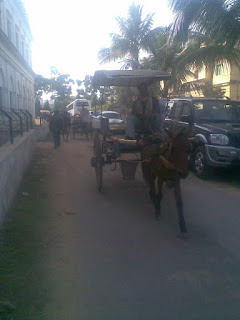 One thing is certain the place will most certainly give you an old world charm with pony ride more common than any other mode of transport
Along the way to Jagat Seth's palace , we saw Nasipur Palace - The Nasipur Palace was built by Kirti Chand, a descendent of Debi Singh. Debi Singh, who settled here from Punjab, was a tax collector in the early days of the East India Company . 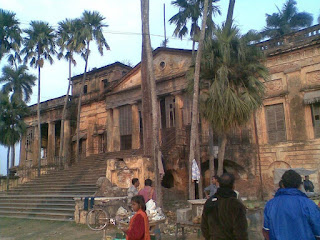 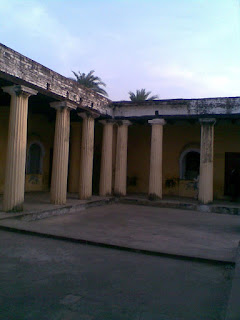 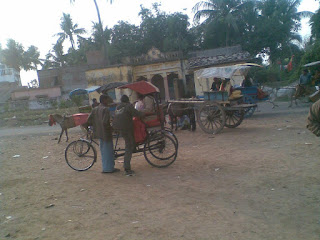 Jafar Deori- Some descendants of Mirjafar still live there 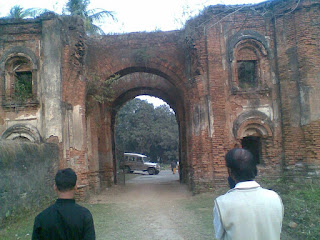 Jafarganj cemetery - The Cemetery contains the tombs of the Nawab’s Nazim, from Mir Jafar to Humayun Jah. It is still maintained by the descendants of Mir Jafar. There is no increment apparently for last 200 years .So they charge Rs 3 for entering the cemetary. 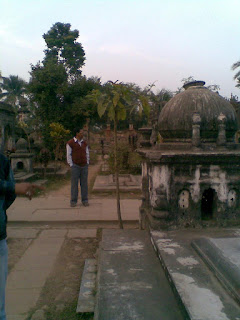 Home of Jagatseth - He is said to be the wealthiest person of the world in those days - having his own personal mint. There was a entry fee(Rs 3) to see the palace. 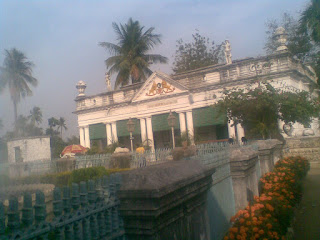 Kathgola palace - A lane beside Jagat Seth's palace leads you to Kathgola palace . It is huge complex, there i met Ujjwal Mukherjee , my office colleague - he is leading a big group coming from mostly Champahati

While coming back we took a rickshaw and went on see Katra mosque. It was already becoming dark - we reached just in time to see the maginficient mosque.

Katra Masjid - built by Nawab Murshid Quli Khan in 1723-24 and it remains one of the most important tourist attractions. The gorgeous building with its huge domes and high minarets has a simple cemetery of the Nawab below the front staircase. 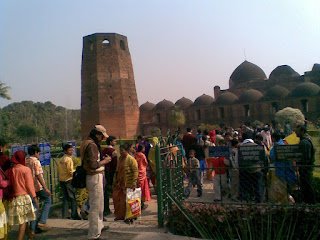 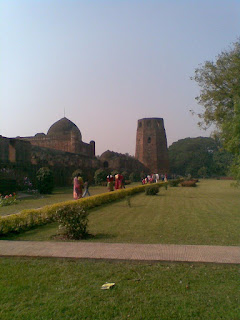 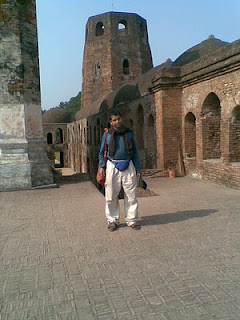 Footi mosque - While coming back from Katra mosque, we saw Footi mosque - so named becaused there is hole in the roof . It was to be made in a day - as per the legend - which never happend and remained unfinished to date. 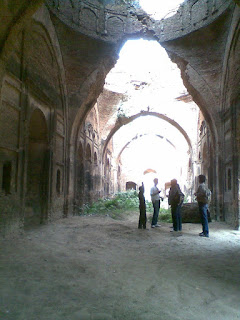 We took a share car to return back to Behrampore. We had our dinner at Samrat hotel. The food is really good.Chicken sweet corn soup (Rs 50) and Garlic Chicken(Rs 65) is really good.
27th December 2009 .
day we took a boat ride to go to the other side of the river - which is basically part of a We We took a conducted tour by boat to see the other side of Murshidabad -
Namak Haram Deori - known as the Traiter's gate, Siraj ud Daulah was killed in this spot.
Khoshbagh - The grave of Nawab Alivardi Khan, Alivardi’s Mother, Siraj-ud-Doula and his wife Lutfannesha and other members of the Nawab family lie here. 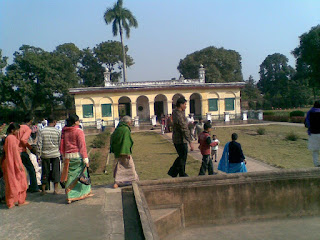 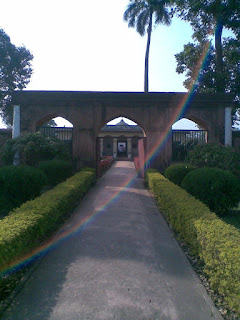 Moti Jhil - This beautiful horseshoe shaped lake was excavated by Nawazesh Mohammad, the husband of the famous Ghasseti Begum. In the palace adjoining it (now in ruins) Lord Clive celebrated the acquisition of the Dewani of Sube Bangla (Bengal, Bihar & Orissa) in 1765. Moti Jheel was the home of Warren Hastings when he became the Political President at the Durbar of the Nawab Nazim (1771 - 73 AD).
Today we once again went to see the beuatiful Katra mosque. After spending some time there we went to see the canon locally referred to as Topkhana which is quite uninspiring.
Then we returned to Behrampore and took a train to go back to Calcutta.
Posted by sourabh at 4:34 PM