Magic of Khajuraho and Orchha 2009

6-7 /3/2009
Sujoy and I left Kolkata(Howrah) on 6th March 2009 by Chambal Express train in the evening, 5.40 p.m.The train is suppose to reach Jhansi (which is after Orchha) after a 22 hour journey. From Jhansi (best budget hotel there is hotel Samrat), we have to come back to Orchha(18 Km by Tempo/Auto/Vikram - Rs 12), since there is no stoppage at Orchha.
But for some unknown reason (probably there was no signal) the train stopped at Orchha and we hurriedly got down at Orchha at around 4 p.m. on 7th March 2009 . So we saved time lot of time !! From station to Ram Raja Temple, we went by shared jeep (Rs 5 only). 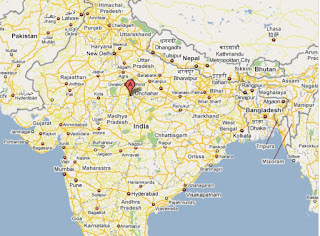 It is on the bank of the Betwa River. Orchha was founded in the 1501 AD by the Bundela King, Rudra Pratap Singh, who became the first King of Orchha, (1501-1531) and also built the Fort of Orchha.It was the capital of Bundela Rajas from 16th century to 1783.
During the rule of Mughal Emperor, Jahangir(or Salim), his friend Bir Singh Deo ( 1605-1627) reigned here, and it was during this period that Orchha reaches its height, and many extant palaces are a reminder of its architectural glory, including Jahangir Mahal(It has both Islamic and Hindu architecture) ,which was built for Salim's visit .Bir Singh Deo also built Jhansi fort.
STAY
We stayed at "Hotel Shri Mahant" [Ph no. (07680) 252 715, Mob 09425 342 349, email shri.mahant.hotel@gmail.com] (an unit "Shri Mahant guest house" [ Ph no. (07680) 252 341, Mob 09425881371, Mob 0989344 ] ) near the entrance of Ram Raja Mandir , which is basically focal point of Orchha) which is beyond Ram Raja Mandir and is on the road(Ram Raja Mandir Road) which goes towards Lakshmi Narayan Mandir. A person working in Shri Mahant guest house took us to our hotel,which is basically 7 -8 minutes from that guest house/Ram Raja Mandir. It is worth staying in that hotel , since it is quite far from the hustle and bustle of the crowded Ram Raja Mandir.It has a wonderful terrace and as Lonely Planet rightly says it has one of the best views from the terrace.You can see the Lakshinarayan temple from the terrace.The Rent for double bed room is Rs 350. (One can also stay at Hotel Ganapati before reaching the main bazar: 9425 342 502/ 7680 252 765 , ganapati_vinod@yahoo.co.in . It is quite good.)
We had our dinner (07/3/09) at Seesh Mahal Hotel (which is basically part of the fort) in the palace complex. With an ambience and historical surrounding like that I felt like king. We listened to folk song of Bundelkhand inside the Seeshmahal while having our dinner. The music starts at 7 am. It was quite magical inside. The food is comparatively quite good value for money(Tandori Roti Rs 10). The price is comparatively quite reasonable , I thought. The food is good. If you are are not a budget traveller (Rs 12oo onwards) is quite reasonable I thought. Please do not miss it at any cost. We had a wonderful dinner at Sishmahal . 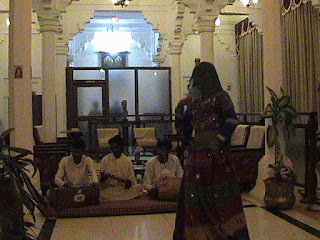 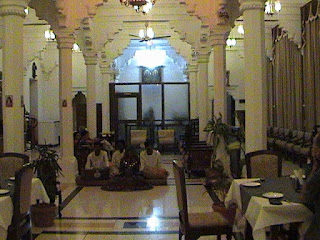 While coming back from dinner we booked a train ticket from Mahoba to Varanasi from a tour agent.He did not want to take money from us for using his net and also taking a print out (on the pretext that he is not a railway ticket agent). I have never come across such a travel agent in my life. We forcibly paid him Rs 50. I will let you know his name.
Next day we had a nice breakfast at Hotel Bhola (Dutch Pan cake is quite good) . A day ticket(Rs 10) for Orchha's seven monuments and the museum is available from the "ticket counter" inside the main palace complex . Buy the ticket early morning since the ticket is valid only for one day. One day is barely enough to see everything. Still Camera charges are quite high (Rs 25/-). According to the person sitting in the counter said reprsentation has been given to tourism deptt(In Khajuraho it is only Rs 5). But it is worth paying the charge!
First we went to Rajmajhal. The caretaker was quite nice and showed us around and we paid him a tips of Rs 50 for showing us around.He was quite useful and much cheaper than normal guide! 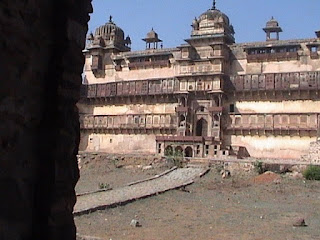 Orchha has a feeling of lost world (I felt it like Hampi) and quite amazing and not touristy. Orchha had a population of 8499 only.Then we went to Raj Pravenn Mahal,Khana Hamam, camel stable, Jejangir Mahal.
At the right side of the ticket office there there is an interesting Indian museum of religious painting.Then we had our lunch at Hotel Bhola. We made a walking tour through the city to see Palki Mahal,Phool Bagh,Ram Raja Temple (only temple where Ram is worshipped as a King) , Chaturbhuj temple. Then we went to Lakshmi Narayan temple further up on the hill .It has beautiful frescoe painting. 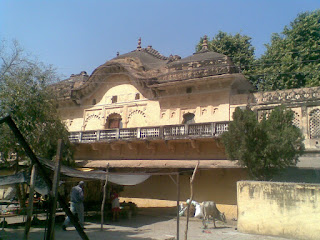 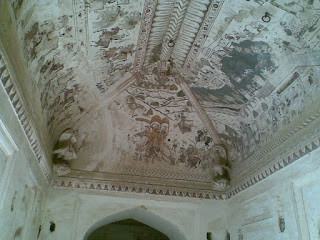 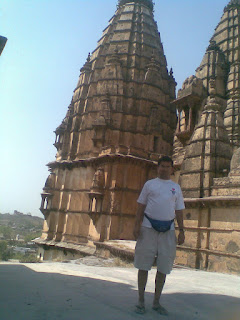 I am standing above Chaturbhuja Temple.Very diffficult to climb at the top. Very few people actually went to the top by climbing horrible stairs.
Lastly we went to see the cenotaphs beside the Betwa River. The cenotaph is just beside this river. 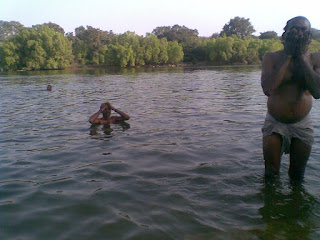 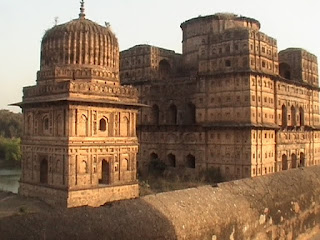 After seeing the cenotaphs or Chhatris, we went across the river and sat beside the Betwa River river for some time to see the setting sun. The cenotaphs can be seen from this side. 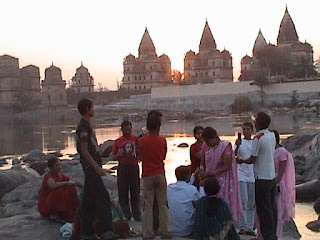 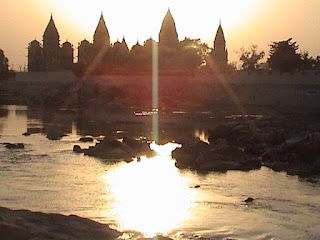 We again had our dinner at Sish Mahal. We met Tony, a britisher, who is coming to India for last 14 years when his business is dull.
9/3/09
Next day (9/3/09) we went to Orchcha rail station early in the very in the morning to go to Khajuraho . Due to lack of time we could not go to Jhansi. Some people say it is better to stay at Orchha and make a day tour to Jhansi. Person who are coming from Varanasi needs to go to Satna and from their take a bus to Khajuraho.
In the train (Rs 28) , bit crowded, we met some interesting villagers and learnt from them:
"Duniya na chale Shri Ram ke bina
Ramji na chale Hanuman ke bina."
" Kali Kalkattewali tera wachan na jaye khali!"
The Khajuraho group of monuments has been listed as a UNESCO World Heritage Site, and is considered to be one of the "seven wonders" of India.
The city was the cultural capital of Chandela Rajputs, a Hindu dynasty that ruled this part of India from the 10th to the 12th centuries. The Khajuraho temples were built over a span of 200 years, from 950 to 1150. The Chandela capital was moved to Mahoba after this time, but Khajuraho continued to flourish for some time. Khajuraho has no forts because the Chandel Kings never lived in their cultural capital. The area was flanked by two golden palm trees. The hindi word of palm is Khajur . Thus the name of the place was derived. Between 950 and 1150, when the Chandela monarchs built these temples, the tantric tradition may have been accepted. In olden days, before the Mughal conquests, when boys lived in hermitages, following brahmacharya until they became men, they could learn about the world and prepare themselves to become householders through examining these sculptures and the worldly desires they depicted.
Anyway after reaching Khajuraho we took a shared auto(Rs 10) to reach our hotel Yogi lodge(Ph (07686) 274 158 at @ Rs 200 . It is a very good value for money hotel.There is internet also.
We had our lunch at classy Raja's cafe , 45 seconds from our hotel and just in front of Western temple. Food is good , but service is slow.
In Khajuraho there are three group of temples - Western , Eastern and Southern.
Western group is 45 seconds from our hotel! However Western group is the main group of temples.
\ 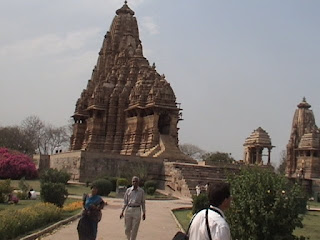 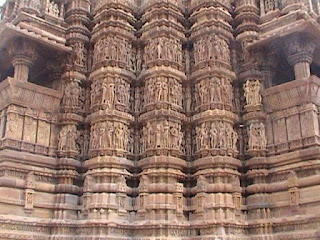 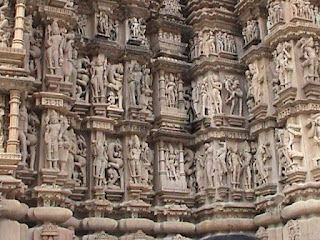 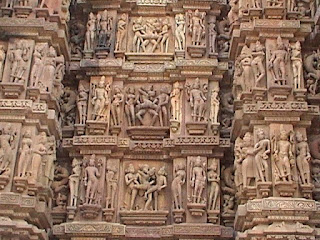 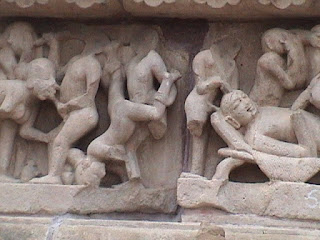 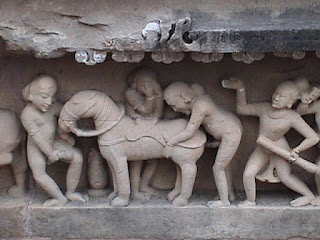 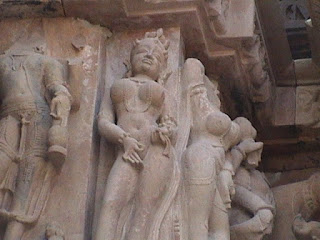 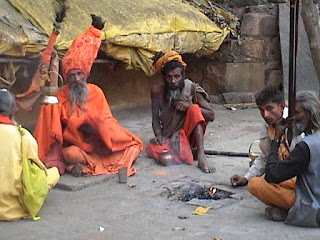 We saw the Western group of temples (Rs 10 entry fee and video charges only Rs 25) on that day itself after the lunch and went for light and sound show @ Rs 180/- which is bit expensive and nothing great , since we were well informed about the place , thanks to our books.
10/3/2009
Next day(10/3/09) we went to see Eastern and Southern group of temples.We took a rickshaw to get down near Eastern group. Some of the temples are quite stunning , but much less erotic. I bought some mementos near the Jain temples. At the Jain temple we met an amazing old man,Niraj Jain,Shanti Sadan,Company Bagh,Satna,MP 485 001; Mob 94251 73699 and Ph 07672 234 099 who is very knowledgeable about the architecture of Jain group of temples and is part of the committe looking after the Jain temples. He speaks good English too. He is willing to accomodate people at his residence at Satna too. One can learn a lot from him about Jainism and Hinduism and architecture.
We then went to Southern group. It can be avoided and number of temple is limited (Chaturbhuj and Duladeo) and architectureally not as exqusite. We only saw Duladeo temple.
After a Bengali lunch at Dada Bodi's hotel (45 seconds from our hotel) ,we went to see an interesting Adivart Tribal and folk art museum. During the lunch we met a Bengali , old couple, who saw us at the temples, asked us "are you doing any research (because one book is always in the hand of Sujoy and the other book is in my hand) ?"
We bought some amzing mementos (e.g. key ring is amazing).
From Yogi lodge we took a rickshaw(Rs 15) to reach bus stand. From there we took the bus (Rs 45) at 3 p.m. to go to Mahoba. From the bus stand of Mahoba we went to the Mahoba railway station by auto (Rs 7).
From Mahoba we took Bundelkhand express to reach Varanasi next day(11/3/09) .We took rest at hotel Puja. Initially they were not ready to acccomodate us.Everything was closed due to Holi. Some of the lumpens managed to throw coloured water at my pants. After reaching the hotel Sujoy refused to go to the ghat because of Holi. I went there alone. I bought some nice pants and bags from Seema Dresses (D 32/21 Hathi pathak,Dashashwamedh ,Varanasi 221 001.Email seemadresses@yahoo.com at very rasonable rates
From Varanasi we took Vibhuti express at 6 p.m. to reach Calcutta on 12th March 2009 at 8 a.m.
Posted by sourabh at 1:16 AM

It is truly a well-researched content and excellent wording. I got so engaged in this material that I couldn’t wait to read. Read more info about Hotel In Trivandrum City. I am impressed with your work and skill. Thanks.

Really amazing article !! Most Tourist prefers to visit khajurahu,it's most amazing place for travelling.Even there is a book written on Khajurahu romance called Lapka by khajuraho. Must read it !!